Home
Food & Drink
The 10 Most Expensive Burgers in Restaurant History 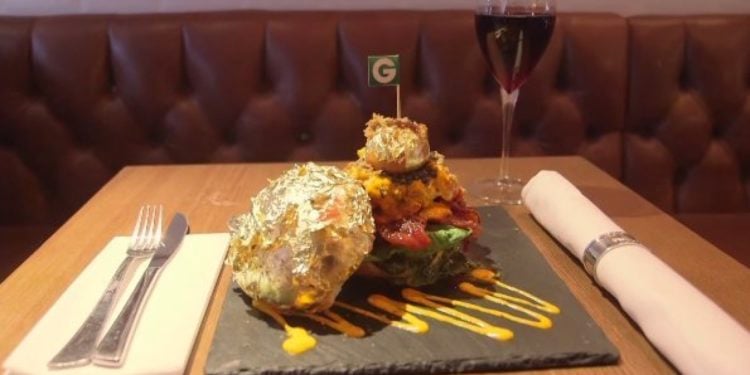 Burgers are one of the most popular foods in America. The hamburger was developed in the U.S., but it didn’t really take off and start spreading to other countries until about the middle of the 20th century. Soon, it was a global food and soon after, food chains developed around the one food, like McDonald’s. It was one of the very first food chains that took the hamburger seriously and developed their whole menu around the sandwich, which took it to a whole new level and made it an international craze. Over time, other restaurants that centered on the hamburger developed, each with their own ideas and versions of the burger, and it hasn’t stopped since. Through the years, thousands of interpretations of the original hamburger have been created and some are quite extraordinary, using unique ingredients to create the perfect burger. People have fallen in love with the hamburger, that consists of a round, beef patty sandwiched between two pieces of bread that was developed for the patty and is known as the hamburger bun. People love to try different types of hamburgers, and will pay big bucks just to get one that is specially made. But how much is a really good burger worth? Would you pay $10.00 for a burger? Would you even pay $100, if you heard it was the best burger on the planet? How about $1000, or more? Well, there are some people that would, and they do, and we’re going to show you which hamburgers are the most expensive out there and you can decide if you think it would be worth the money, too. Here are the 10 most expensive burgers in restaurant history. 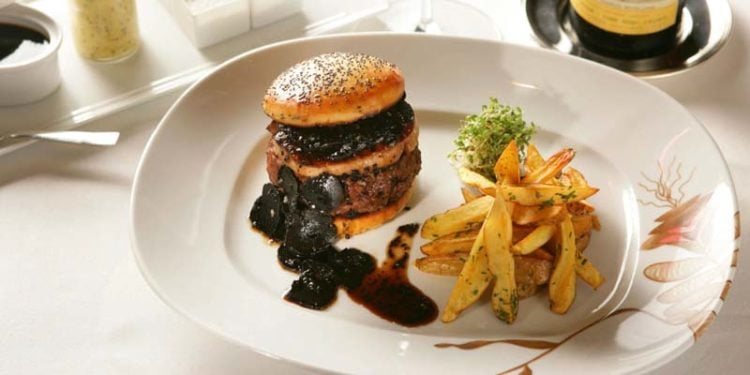 
Chef Hubert Keller created what could also be called, a truffle burger. Chef Hubert Keller designed a Wagyu beef burger with foie gras, and savory, shaved black truffles, which he topped with his special sauce. Chef Keller redesigned and reopened the restaurant, Fleur, and he draws in a big crowd, just to taste his delicacies, with the Fleur burger 5000 being one of them. The famous burger is served on a Brioche truffle bun, and comes with a side of fries. If you don’t think that quite adds up to $5,ooo, you also get a bottle of 1995 vintage Chateau Petrus, which runs about $2,000. This humungous burger is a celebrity and has been featured on an episode of the popular series, Man Vs Food. That’s because it is one of a kind, weighing in at 15o pounds and taking over 22 hours to prepare. You need a big, hungry bunch with you to tackle this burger that also comes loaded with 15 pounds of lettuce, 30 pounds of bacon, 36 pounds of cheese. Are you hungry? And do you have the budget to pay for it? Because it will cost you just about as many pounds of greenbacks to pay for it. 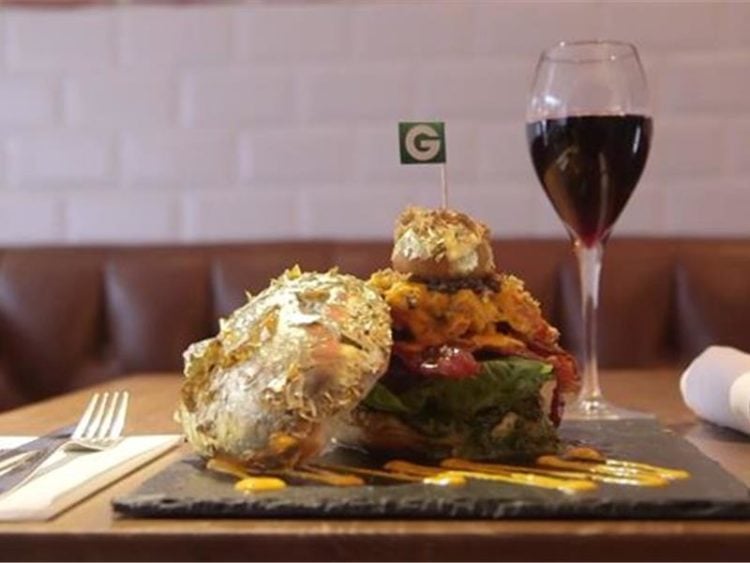 Some people pay mortgages this high, and others buy expensive burgers. The Glamburger sells for $1,768 on the Honky Tonk of London’s menu, which is an Amereican Style restaurant in the UK. The burger consists of Kobe Wagyu beef, along with New Zealand Venison, caviar, black truffle brie and smoked Himalayan salt. Lobster that has been poached in Iranian saffron is also a part of this delectable burger, and it’s topped with a hickory smoked duck egg, Japanese matcha, champagne jus, grated white truffle, and then of course, you have to have some bacon to make it complete. To finish off the entire package of meat and its condiments, it is all covered in gold leaf, which only adds to the hefty price of $1,770 a burger. 
Las Vegas is known for its elegant hotels and restaurants, including Le Burger Basserie, where you can get one of the most expensive burgers ever. The 777 burger starts with your choice of bun, from sesame seed, caramelized, aged parmesan cheese bun, onion bun, or an oven-dried tomato ciabatta bun, which is baked fresh, two-times a day. A surf-and-turf combo is placed on the bun, which consists of Kobe beef and Maine lobster, then topped with caramelized onions, prosciutto, and French triple cream Brie. To complete the burger delight, 100-year old balsamic vinegar is drizzled over top. Although the ingredients alone, are exquisite enough, what really pushes the price of this burger upwards, is the Rose Dom Perignon you get with your meal that will only set you back a cool, $777 if you choose this off the menu. 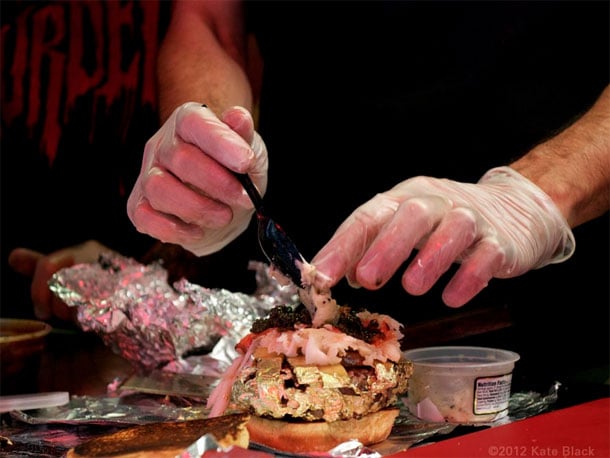 It may not sound appetizing to say it by name, but the Douche burger is one of the most expensive burgers ever, and here’s why. The food truck 666 founders were not too happy about the gourmet burger movement that was going on and to contest and show their distaste for it, they developed their own version that was supposed to really be a bit comical, making fun of the gourmet burgers out there that add such lavish ingredients. The Douche burger mimics these gourmet burgers, using similar ingredients, such as foie gras-stuffed Kobe patty that’s covered in Gruyere cheese that has been melted with champagne steam. Other ingredients you’ll find on the burger include, truffles, lobster, and specialty BBQ sauce. For added elegance, the burger is wrapped and served in a gold-leaf wrapper. It may have been created as a joke, but it is definitely meant to be eaten and if you can afford $666, it may be worth trying. The Serendipity 3 restaurant in New York is a high-end restaurant with a wide variety of burgers to choose from on the menu, however, the Le Burger Extravagant is the most expensive on the menu, and one of the most expensive anywhere. You may not think a burger should cost $295, but Serendipity 3 does and here’s why. It is made of Japanese Wagyu beef that has been infused with white truffle butter, along with James Montgomery cheddar cheese over the burger, a fried quail egg also sits on top. It’s a real masterpiece, and one that requires you make your order for the burger 48 hours in advance if you want one, or you will have to choose from their other delicious burgers when you dine there. 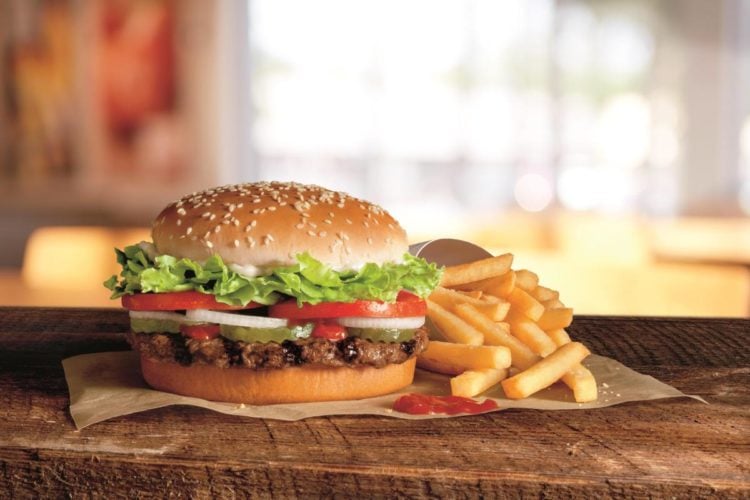 When you think of Burger King, you kind of think along the lines of McDonald’s burgers, good and cheap. But here’s one Burger King burger that outdoes the rest. It sells for $200, and that is because it’s not just any Burger King Whopper burger. TheBurger King in West London has a burger on the menu that is made of Wagyu beef along with white truffles, Cristal onion straws, and  Pata Negra ham slices. Modena balsamic vinegar, lambs lettuce, and pink Himalayan rock salt are also ingredients used in this burger concoction. A special sauce is used on the burger that consists of an organic white wine and shallot mayonnaise in an Iranian saffron, and the bun is a white truffle dusted bun. Sound yummy? More importantly, does it sound like it is worth $200? I don’t know, but I’m glad it isn’t on every Burger King menu. Everything on Wall Street is expensive, so what more would you expect from the Wall Street Burger Shoppe, but to sell expensive burgers. The Richard Noveau sells a burger for $175, if you happen to be popping into the shop for a quick bite. It geatres 25 grams of black truffles, aged Gruyere and foie gras and actually carries real gold flakes in the sandwich, which I’m sure, plays a role in the high price for the burger. It has been described as a work of art. It may be worth framing and hanging on your wall, rather than eating it, if that’s the case. 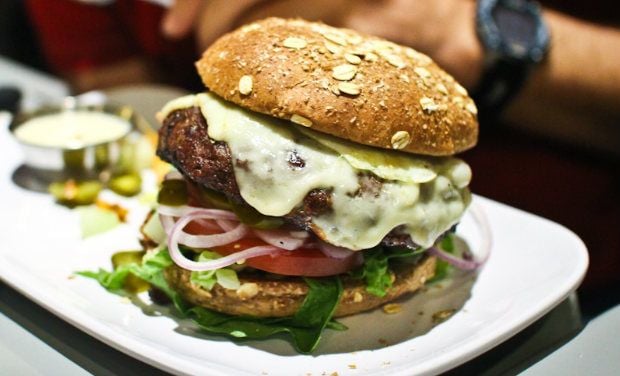 More truffles and more foie gras is used in yet another very expensive burger, the X-burger that hails ffrom the W Hotel in Seoul Korea. If you think you’ve tried enough American burgers, then try one from Korea. The X-burger is made with Australian wagyu beef and topped with seared foie gras along with shaved black truffles. The garnishes on the burger are the typical tomato and red onion, but now it gets interesting. You also get fresh asparagus, wild pine mushrooms and a lobster tail to complete the surf-and-turf style burger. The burger comes with a selection of brunoises tomato salsa, dark red wine truffle sauce, and truffle aioli. Lots of truffles and truffle flavors make up this expensive burger that costs $160, and its served on a brioche bun.

One of the most popular, and most expensive dishes on the menu at the DB Bistro Moderne, in New York, as well as at the Daniel Boulud Brasserie in Las Vegas, is the DB “Royale” Double Truffle burger. The beef is stuffed with a number of ingredients to give it its unique texture and flavors. Red wine-braised short ribs, for one, along with foe gras, a mix of root vegies, and preserved black truffle. On the burger, you’ll find just a touch of horseradish, fresh tomato, frisée lettuce, roasted tomato confit, and red onions. Sounds delicious enough, and to make it even tastier, the burger is served on a homemade toasted parmesan and poppy seed bun. The burgers go for $120 and both restaurants, so if you are in the mood for a good burger with all the fixin’s, these aren’t’ your run-of-the-mill fixin’s, and they’ll cost you extra, a lot extra, when you order the BD “Royale.”