Home
Business
10 Rules of Success According to John Stamos 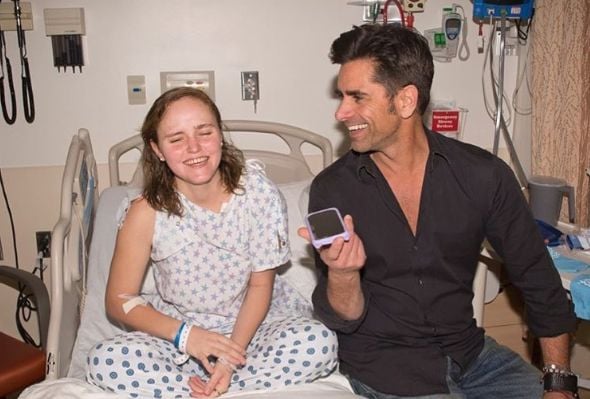 He’s been in a great number of different roles throughout his career, but fan favorite John Stamos is most likely best known for his roll on “Full House” as Uncle Jesse the best. The wise-cracking, Elvis-impersonating musician and uncle to three wily young girls became a hit during the show’s run, and Stamos has been a prominent name in Hollywood ever since. He’s made other appearances on shows like “ER” and even “Law and Order: SVU”, but the recognition as Uncle Jesse yet to die out, especially with the resurgence of “Fuller House” on Netflix. While the show might not be enjoying the same level of success as it once did, the character played by John Stamos is a most welcome return to a time when sitcoms were still humorous and family-oriented.

While some claim that Stamos is a bit conceited and even standoffish, others would claim the exact opposite. His career has taken a few twists and turns based on his popularity and how he deals with others, but overall he is a competent and capable actor that offers his own brand of success to Hollywood in return for one chance after another to enjoy the life he’s grown used to over the years.

For what seemed like a long time John Stamos was among the few people that didn’t seem to age as the years passed. Within the last decade however it has been seen that he is finally starting to show his years, as the wrinkles and graying hair have begun to show through. While he is fully accepting of this, the distinguished look that his advancing years have placed upon his person have done little if anything to curb his appeal.

9. “I like to sing with people, whether they’re good or not.”

Stamos has branched out since “Full House” in order to keep himself relevant to Hollywood and his viewers, and has even been seen on Broadway a time or two. His dedication to his craft is such that he will often take up any job that he can get just to keep working. Whether this is an inspiration or a simple term of necessity isn’t quite certain, but for many fans it paints him as an altruist that cares little about the money and enjoys his work.

8. “I’m not the guy who bursts into the room. I’m the most insecure person you’ll meet if you get to know me.”

This is rather difficult to believe thanks to the many characters that Stamos has played on the screen, particularly those that have been the attention-seeking individuals that tend to be quite cocky and even arrogant. However, if one looks at Uncle Jesse on “Full House” a little closer, they might take note that the character does in fact showcase many vulnerabilities much as Stamos has revealed.

7. “Single-camera work is very difficult. It’s one of the reasons I wanted to do it – it’s an arena I’m not that skilled at. I grew up doing sitcoms and theater and even playing with the Beach Boys, where you’re programmed to perform, your body gets into a rhythm and you know it has to perform.”

This is what is inspirational about this actor, that he knows what must be done and goes on to do it with the determination that is necessary to accomplish a goal. While he seems a bit cocky at times to many, he is no doubt a talented and highly skilled individual that can show his true side or that which fans want to see at any given moment. That in itself is talent.

6. “I knew the character that I wanted to play. A guy who was like me, or what people think I am. The guy who you thought had everything going for him and when you pulled the curtains away, you see this guy who is just as confused, sad, lonely, neurotic and insecure as anybody else.”

This speaks largely to the Uncle Jesse character, who was so cocky and sure of himself on the outside but on the inside was always attempting to appear tougher than he was. These vulnerabilities are as much a part of John Stamos’s personal character as they are his actual persona.

5. “I have never been so calculating as to sing some Barry White song to get a girl. But I do think it’s very romantic to cook dinner and sit around the piano at night and sing together.”

More and more Stamos continues to paint a picture of a man who simply wants good company, good times, and a life that is idealized by what is shown during his many performances. To say that he is cocky and arrogant because of his many roles is a bit naïve, particularly considering that he has been seen to be an altruistic and even friendly person off-screen.

This is a simple and amusing quote taken from a “Full House” episode in which Jesse is caught impersonating Elvis Presley, during which it is revealed that he has made this his profession. It speaks to the same quotes seen above that show how Stamos is in fact a very insecure person that attempts to work around this issue.

3. “I don’t know, but I do know I want to have children. That’s the only thing missing in my life. I certainly thought I’d have some by now.”

Any great actor can accomplish anything they want, but as even the greats know, a life spent alone with only success to warm your heart is often and empty one. Many of the greatest actors have children to enlighten their lives and offer them some form of distraction from their busy lives. Stamos did not have children early on, and obviously laments that missed opportunity.

2. “Every couple years, you know, these great things drop in my lap. It’s been fantastic.”

Stamos has had his ups and downs in Hollywood, but it seems that he surges back every time people begin to forget him, keeping his name and his reputation alive. He is a good enough actor to get away with this, as has been proven by the many fans that are always glad to see his return.

Some people get caught up in their work and as a result tend to miss out on many opportunities in life. Stamos is no different as he’s been married and divorced. He is still searching for his place in life and film legend, but there is little doubt that he will find both given his reputation and affable nature.

10 Rules of Success According to Chris Martin

10 Rules of Success According to Bradley Cooper