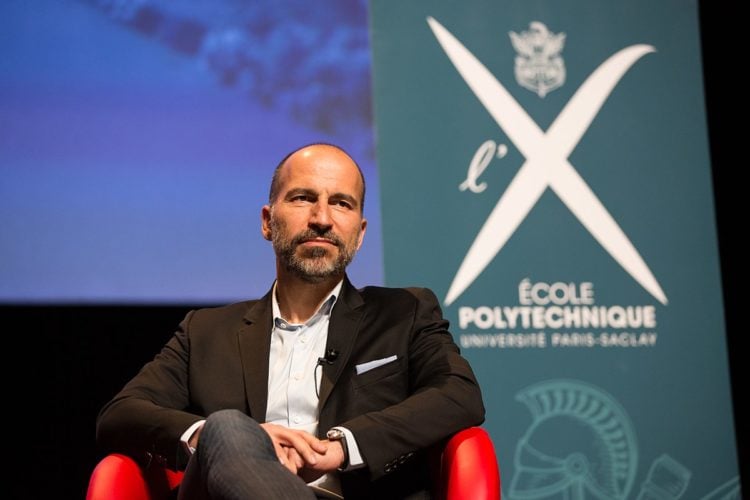 Dara Khosrowshahi was born in Iran and migrated to the U.S. when he was 9 years old during the Iranian Revolution. His father, however, was detained by Iranian authorities for 6 years, which meant that he would have to live with his mother, which he did. He grew up in New York along with two brothers. Khosrowshahi has made an incredible success out of his life and his career, along with taking a big name travel company to its height of success in ways that he has been commended for, and recognized for, in many ways. He has recently accepted the position of CEO of the ride-sharing driver company, Uber. Uber has had a rough time with the previous CEO, Travis Kalanick, and has been in search of a CEO who could do wonders for the company, and turn it around. After strong negotiations, Khosrowshahi has recently accepted the position. Although you may be familiar with this incredible company leader, here are ten things you didn’t know about Dara Khosrowshahi.

1. Was the CEO of Expedia before Uber

Expedia is one of the most popular names in travel. Over the years, more an more people have been turning to Expedia for their travel needs, and the name behind the ever-growing company is, Dara Khosrowshahi. He has been the CEO of Expedia since 2005, but had joined the company under USA Networks in 1998 as an executive before a couple of acquisitions took place, including the buyout of USA Networks by IAC, later followed by the purchase of Expedia by IAC.

2. Admits he has fears

It was a hard decision for Khosrowshahi, whether or not to take the position at Uber. He admitted to his staff at Expedia that he was scared, primarily because he had been with Expedia for so long, over 12 years, and the journey there wasn’t always easy. Now that he has really become a major part of the company, he felt as if he was leaving his comfort zone to take on this new role, but he knows that that is often the greatest way of learning.

3. Didn’t have the ability to lead at first

Khosrowshahi admits to not being a good leader at first, for the first year of running Expedia. He says that he wasn’t particularly a very good CEO. He recounts an employee telling him that he was telling them what to do, but not telling them where they needed to go. Once he pondered that and figured it out, he began to soar at the job and today, he has a 94% approval rating as one of the highest-rated CEOs on Glassdoor.

4. Was ranked the highest paid CEO

Not only is Khosrowshahi hold the 94% rating as top CEO, but he was also rated as the highest paid CEO in the S&P 500. It was determined that Khosrowshahi was earning a salary of $95 million in 2015, mostly due to stock incentives during that time, however, since then, the figure has dropped to $2.5 million as of  last year.

Yes, Khosrowshahi does have a college degree and is very educated, although it isn’t in what most might think his degree or field would be in. Khosrowshahi earned an electrical engineering degree from Brown University in 1991. Most people might be led to think he would hold some sort of financing or business degree, although after college, Khosrowshahi did work in finance for seven years for the investment firm Allan & Co., as an analyst.

6. His youthfulness is what is needed

A professor of finance at the University of Maryland, David Kass, has weighed in on what kind of CEO Khosrowshahi will make for Uber. He thinks that part of Khosrowshahi’s qualities that will come in handy for the company, is that he is young and vital. He was quoted as saying, “He has substantial CEO experience at a relatively young age. Youth and experience are very important qualities in Silicon Valley.” He also believes that as Uber continues to redesign how people get around our cities, it his Khosrowshahi’s youthful vitality that will help the company to improve on its services, especially for customers who are in their 20s and 30s.

Khosrowshahihas been very vocal and critical about his feelings about President Trump. He is not a fan of his actions or political views on the immigration policies and says that his views and actions have really hampered the travel industry. He does not hastate to talk about his feelings, especially on his social media and has tweeted about it a number of times.

Khosrowshahi has recently talked about his obsession with voice search and says that he has a number of different types of voice assistants he uses in his own home. He believes that travel will involve voice search for booking plane tickets online, and this should be available. He has said, “You are going to get into a world where people are going to ask questions …  and we will be able to answer any question about travel,”

Khosrowshahi has very supportive parents and he often talks about how they have supported and have pushed for him to succeed. He also sometimes tweets his parents’ praises and responses, like when he got his ranking on Glassdoor in 2017 for top CEO, moving from the 11th position in 2015. He posted this tweet from his parents: Mom: “Nice! You made the top 100!”. Dad: “#39 is good but you were #11 in 2015” #whyIlovethemboth  He is obviously very close to his parents and their support has been an encouragement for his success.

10. Has had many acknowledgements of his success

Khosrowshahi’s success and outstanding performance as a major CEO in the business world has definitely been getting notice through the years. He has been recognized by many people and organizations, including being listed on the U.S. State Department’s “List of Prominent Iranian Americans,” one which he joined in 2015. He was also named Ernst & Young’s Entrepreneur of the Year, in 2013, for the Pacific Northwest Region, an award that Jeff Bezos had also won.