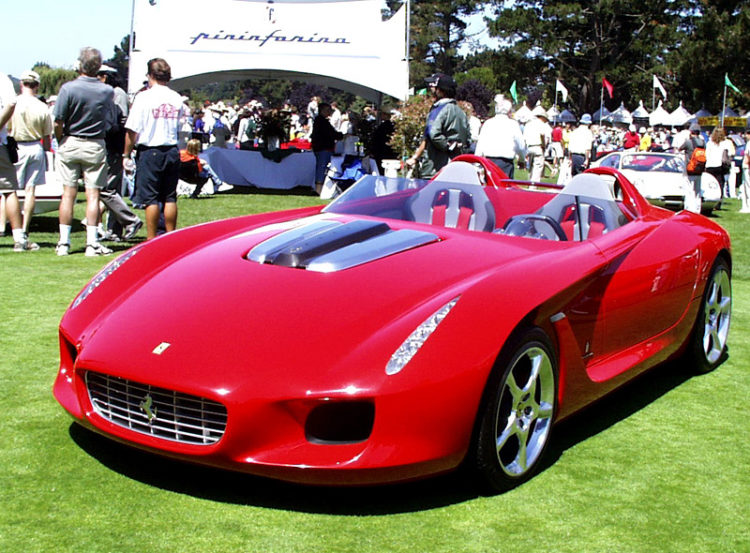 All Ferrari’s are gorgeous, but there’s one that’s just head and shoulders above the nearest competition. The 2000 Ferrari Rossa by Pininfarina is all bullet sleek aerodynamics designed to flash past you in a brilliant blur of futuristic red and leave you wondering what it was. Should you be so lucky as to see this incredible car even once, you cannot mistake it for anything else on the road. It was made to connect the past to the year 3000 with lines that are simultaneously classic and next-century. The beauty of this strange and phenomenal car cannot be overstated.

Pininfarina says it best right on the front page, “We Move Dreams,” and that’s precisely what they do. The 90-year-old company may be getting up there in years, but you only need a momentary glance at their work to see they’ve always been rooted in the future. Everything about their stylish neo-modern lines could be found in a sci-fi movie, or possibly in another Speed Racer remake.

Of course, most productions couldn’t dream of affording Pininfarinas products. More’s the pity. From yachts like spaceships for the sea to bicycles that look like they could belong to Lance Armstrong‘s great-great-grandson, it’s easy to believe these pieces will be inspiring the world of tomorrow for a long time.

Ferarri is the younger company. They first opened their doors in 1947 with a dream of speed that has lasted seven decades. From the moment the 25S won that first race the year they began, the distinctive lines and unique design perspective has been at the forefront of automotive innovation and class. They still hold the record for the most Formula 1 victories to this day. Enzo Ferarri was always obsessed with making his cars the fastest thing rolling, and he especially wanted to beat Alfa Romeo. As often as not, he succeeded. That’s the legacy of Ferrari, power, and victory, creating its own image for others to copy.

Surely the partnership was an obvious extension of both companies. The collaborative genius of these two incredible entities has always been a sight to behold. Unfortunately, in 2017 the combined models officially came to an end, so there are no more new Pininfarina-Ferraris to come… for now. We’ll belay our sorrow with the knowledge that it only increases the value of those that exist. The companies parted on amicable terms and have as much as stated that they may work together again in the future. However, it was the concept car they created for the year 2000 that was the pinnacle of their accomplishments together.

As with any great beauty, we can’t help but be curious about how she’s built under the paint. It’s only natural to think about it and wonder if her insides are as nice as the package they come in. As far as we can find, they are. Though this car is so rare most people have never seen it or even heard of it, we did some digging and came up with a few of her basics.

The enduring and inspired concept behind this particular car was the original Testa Rossas. Specifically, Pininfarina sought to take the 1958 Ferrari 250 Testa Rossa by Scaglietti and Co. or the 550 Maranello depending on the source  beyond its brilliant roots by moving it ahead in time to the next new century. They clearly succeeded.

This car was just too beautiful to be real, so they only made a single model. It debuted at the 2000 Paris Motor Show and wowed the crowds there. Beyond a mere concept, this is a fully functional dream machine. The special occasion that warranted this particular concept was Pininfarina’s 70th anniversary. If there’s a better way to celebrate your birthday than with a new Ferrari then it has to be celebrating your birthday by getting this new Ferrari. Pininfarina made the right choice, but if you know their work, that won’t come as much of a surprise.

The forward thinking that went into this particular Ferrari was more than a passing fantasy. A number of the more brilliant design elements have been carried forward into other cars. The taillights were later incorporated into the 2002 Enzo, a Ferrari that commemorates the founder of the company beautifully. In fact, they liked the lights of the Pininfarina Rossa so much that over time they became a standard component in all Ferrari’s.

This wild car, with its crescent wraparound front window and its partially red interior, is the closest thing the auto world has to a living legend. It only falls short of that honor because it’s technically not ‘living.’ Still, with a growl and roar like no other when it’s revved,  you’d almost believe it is alive.

You won’t find a car like this anywhere. Not even in the future. The Pininfarina 2000 Rossa is truly the epitome of everything about a Ferrari that leaves us breathless and awestruck. Being in the presence of such obvious greatness is enough to fill a car lover’s dreams with red. It’s not for sale, but if it were, we’d snap this insanely gorgeous concept car right up and stash it in a private collection, just as the current owner did. There’s no better way to show pride in your accomplishments and a solid dedication to what comes next.