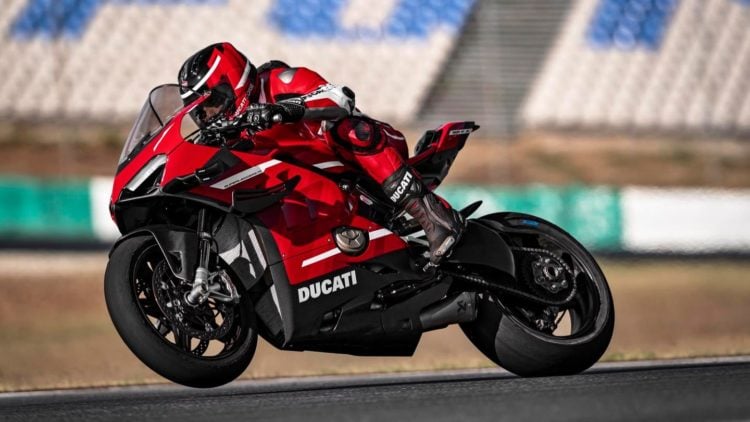 Ducatti announced the impending release of a new take on the Panigale V4 in late 2019 for the upcoming model year. Keeping with a continual forward movement in technology, innovation, and making upgrades to the bikes that are already in a league of their own is becoming a habit with the brand. There are some exciting features we want to discuss and to do so, here are 10 things you didn’t know about the 2020 Ducati Superleggera V4.

Ducati engineers started with the inspiration, the Panigale V4 that came in with a weight of 436 pounds and the S version that weighs in at 430 pounds. They knew they could go it one better to lighten the load and increase the power at the same time. They chose a light material that is also very strong for the bodywork, frame, and subframe, which are all made of strong carbon fiber. The result, a reduction in weight that took the new bike down to a mere 335.5 pounds, dropping it by about 100 pounds from the Panigale V4. 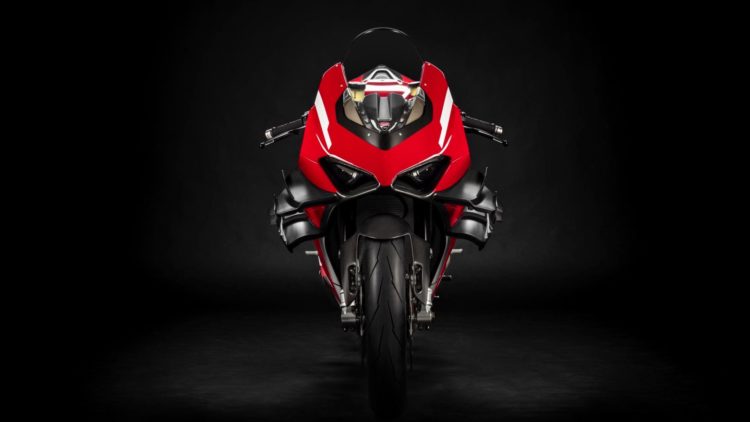 The Superleggera V4 for 2020 is one light bike and it is also a powerful one. The claimed horsepower is 234 and with the new featherlight weight, it has increased the power to weight ratio by 40%. The current rating for the new bike is 0.7 horsepower per pound, which is impressive by anyone’s standards.

3. The 2020 Ducati Superleggera V4 is an exclusive

Ducati claims that the Superleggera V4 is going to be the only street-legal bike in the world that features carbon fiber for its total load-bearing build for the chassis. This is quite a remarkable event for the records of motorcycle automotive technology and innovations. It’s worth marking down for the history books as a feat that accomplished a first in the industry. It’s what happens when great minds come together to accomplish a goal.

4. Biplane winglets are a notable feature of the Superleggera V4 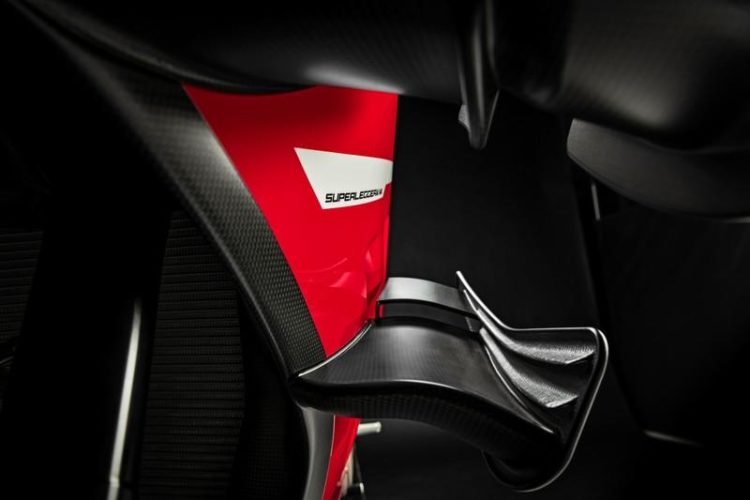 We learned from the specs on the bike that the skillfully engineered biplane winglets that are built into the Superleggera V4 increase its aerodynamics in a big way at higher speeds. They produce a total of 110 pounds of downforce at 168 miles per hour. This helps to keep the bike grounded and in touch with its environment for added rider control and safety at high speeds. Necessary, we think for an ultralight bike.

5. This is a limited production motorcycle

Ducati has set a limit on the total number of 2020 Superleggera V4s to be produced. This is going to be an exclusive collector’s bike that comes complete with individual numbering and a certificate of authenticity. The ID for each bike will match the VIN and it will be displayed on the ignition key, the fork yoke, and on the frame of the bike. Only 500 of these bikes will be produced and released for sale to the public worldwide 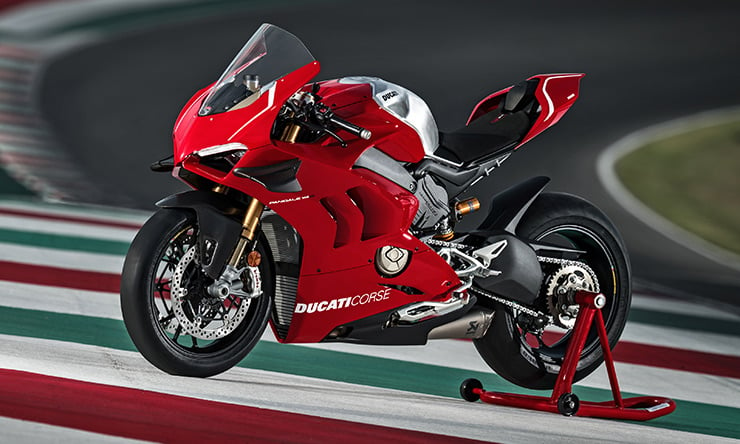 Ducati didn’t compromise in the build of the new V4, and it’s being described as a “street-legal rocket.” This gives you an idea of how hyper the bike will be. The ultralight carbon fiber bike is so fast that it sounds frightening to ride at 168 mph in a superlight power machine, but the innovations of multiple winglets help keep it stuck to the pavement if that helps any. It’s classified as a hyperbike because of its tremendous speed and power, but no worries, as long as you obey speed limits, you’re legal.

7. The onboard tech is updated

The 2020 Superleggera V4 is coming out with a 5-inch FTF dash featuring a RaceGP display. Special instrumentation designs are based on the brand’s in-house MotoGP Andrea Dovizioso’s design for the Desmosedici GP20 monster with a similar Multimedia System from Ducati so you can receive texts via Bluetooth, play music and take calls from the bike.

8. Ducati paid attention to the details 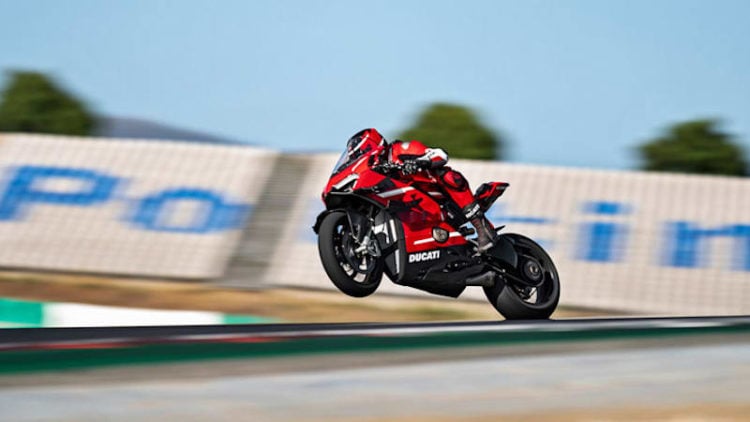 The new Superleggera V4 is a detailed bike that will feature a carbon-fiber fairing that is light and tough. The saddle is also made with a carbon-fiber base to reduce weight and add durability. The footpegs, levers, triple top clamp, and radiator cap are aluminum milled which also reduces the overall weight without reducing the strength or the quality of the components. The fasteners are made of titanium and aluminum which also shaved nearly a pound off the overall weight. The engineers at Ducati considered every minor detail of the bike in their meticulous planning for an ultra featherlight finished product. It’s actually quite impressive.

Ducati has equipped the Superleggera V4 with a 998cc V4 engine which will take this production bike to unimaginable speeds. It cranks 234 horsepower with the claim that riders will gain the sensation of greased lightning on steroids. The Akrapovic exhaust will join with the power plant to create a more thunderous rumble. Consider the combination of thunder with speed and the first image that is conjured is that of lightning, so we must concur with the claim based on these elements. 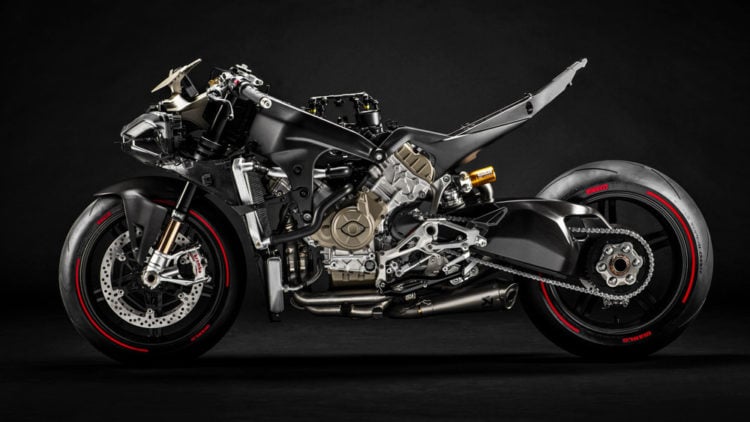 Every once in a while a very special edition motorcycle is released that turns the riding world on its ear. This is the superbike for the 2020 model year that is eyed as the biggest disruptor of the season. Consider the fact that it is an uncompromising hyperbike that is just barely street-legal, bursting with power, an ultralight carbon-fiber design that is a first for its class, and add to that the inclusion of the Akrapovic exhaust along with the new aerodynamics that enhances downforce. The bike is slated to be available for sale for the first 500 who dare in June of 2020.

The 20 Best Things to Do in Westport, CT