Home
Motorcycles
A Closer Look at the 2020 Triumph Thruxton 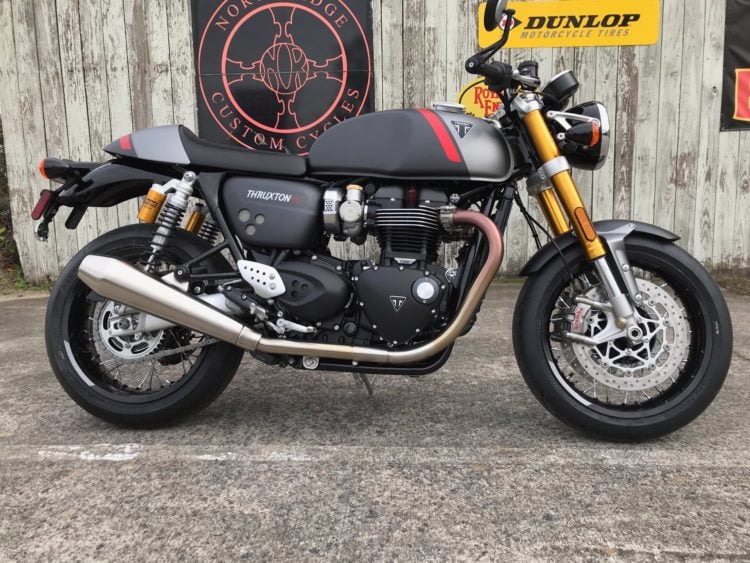 One has to wonder if John Bloor had some type of vision of the future when he started running Triumph Motorcycles in 1983. After all, the British motorcycle manufacturer hasn’t done too poorly in the years since. From their initial T300 line to the Triumph Factory Customs limited edition line, Triumph fans around the world have had the pleasure of owning and enjoying just the right bike for them, and in the process the company has become a major competitor in the United States as well.

While the model line for 2021 is so close to official release, we wanted to pay homage to another recent model and model year Triumph, the 2020 Triumph Thruxton RS. Today’s ’10 Things’ list will cover ten tidbits of information on the bike that most will not know, but you might. Don’t take a chance by not reading it, because we’re fairly certain you will be missing out on some great schooling if you do.

Maybe you’re reading for relaxation, or maybe you have had your heart set on the sporty, parallel-twin engine 2020 Triumph Thruxton RS. Either way, you’re about to learn a number of things about a bike reincarnated, and what you learn may actually close the gap between fandom and owner, and between one who thinks and one who acts. So, let’s get started and take a closer look at the 2020 Triumph Truxton RS.

You may have taken note of the model name. Yes, ‘Thruxton’ is a bit unusual to us in the States, but the fact is that there is reasoning behind the moniker. The bike is named after a Hampton racetrack, the Thruxton Circuit. In the beginning the Thruxton was an endurance racing bike, and had been since its birth in the mid-Sixties. The Thruxton happened to win the top three places in endurance in 1969 at the Thruxton 500, which happened to be the catalyst for era of ‘café racers’. 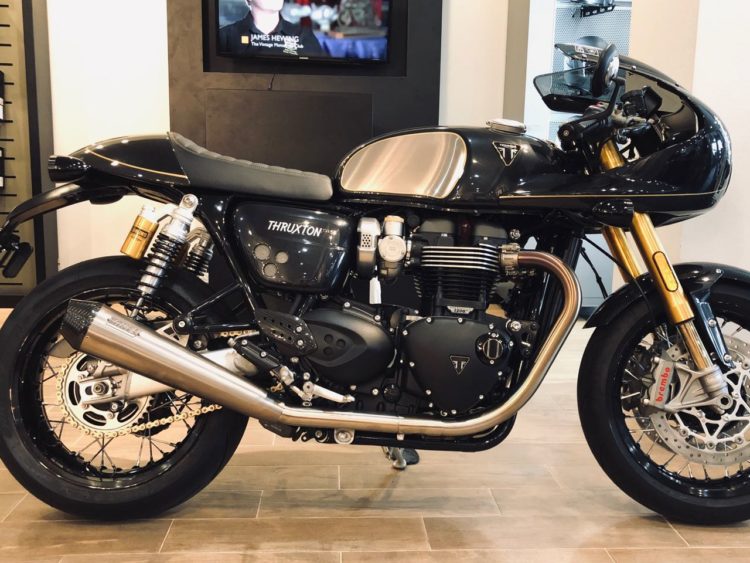 All sport models that fall under the RS sub-heading comes equipped with a quickshifter, a device which makes it possible to shift gears on a manual transmission without use of a clutch. The Thruxton RS, however, does not utilize this device. As it turns out, those at Triumph in power decided that the use of the quickshifter would not correctly convey the true spirit of the model, and therefore opted to omit it from use.

3. What About That Gearbox, Anyway?

You’re right; it wouldn’t do to mention the lack of the quickshifter without going into any detail about the gearbox itself. Speaking of such, it is a six-speed gearbox, with gear-shift assistance being provided by a new and improved, much lighter assist-and-slipper clutch. The clutch basket also got the pleasure of a bit more machining, which is a good point, not to mention the fact that they eliminated the use of the dual clutch plates. It seems that the clutch’s pull is very light and controlled, so making your way through the gears is a quick and efficient part of the process. 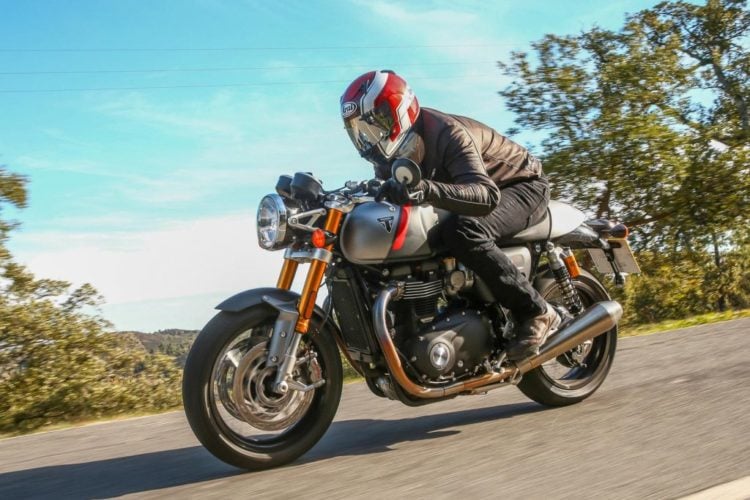 Being able to select the traction mode you want to use on your motorcycle has become run-of-the-mill these days, and the Thruxton falls right into line with the times. It boasts three different ride modes: Sport, Road, and Rain. These are easily adjustable at pretty much the drop of a hat, so you don’t have to worry if you suddenly find yourself riding in a downpour, or if you decide on the way home from work to take out some aggression off the road. When you shift modes adjustments are made to ABS intervention, the throttle map, and the traction control, so basically, Triumph didn’t leave anything out when working to make this bike all it could be for its purpose.

5. Weight Loss At Its Finest

The gearbox isn’t the only thing that’s lighter. In fact, the entire bike boasts a ‘weight loss’ of 13 lbs. Under the previous year’s model, and that loss contributes to many improvements in handling, gear-shifting, and the amount of power you feel when flying down that road…it definitely has some more zip, for lack of a better word. Of course, when it comes to bikes meant to be racers in one form or another, you can always expect it to maneuver and handle better at a lighter weight, as well as gain speed. 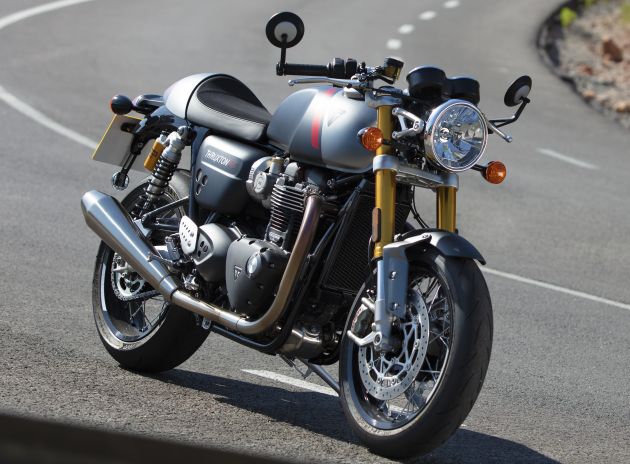 Here’s a bit more detailed information about the engine and related specs:

Indeed, all these things working together for the greater good of this awesome piece of machinery. The winning combination is really easy to feel and enjoy for the rider, which is one of the reasons for the popularity of this retro-style café racer. If you’ve had the pleasure of riding one before you know just what I mean.

Here’s a juicy little piece of information, and those of you who hold an affection for the racer bike will appreciate getting it. The 2020 Thruxton RS happens to be the most powerful motorcycle of all the British motorcycle maker’s ‘modern-classic’ bikes. Between its modern-laced-with-yesteryear appeal and its power, this particular model year’s Thruxton RS makes up one impressive package in any bike lover’s eyes. 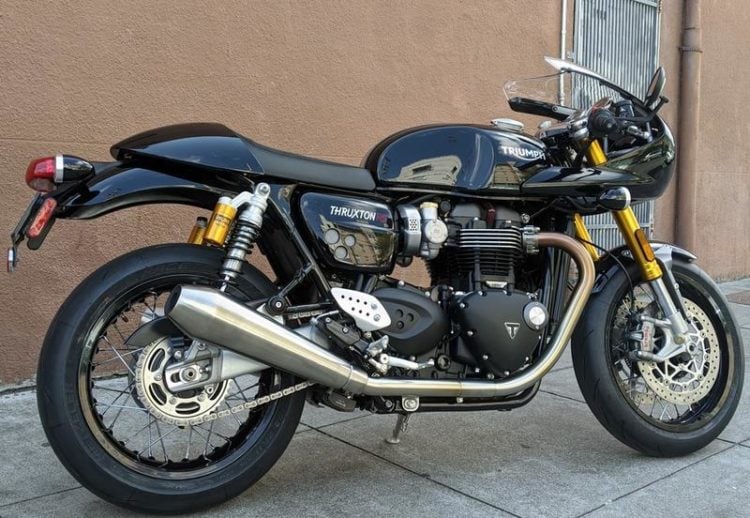 We’ve managed to cover some really nice points about this bike without getting into too much detail…kind of just skimming things over. Therefore, we thought a tidy little sub-list would give you a better idea of this bike’s positive characteristics.

• Lighter, faster, and more efficient
• A nice, new overhaul for the 2020 year
• Lots of modern extras and options
• Upgraded tires and brakes
• Retro style and silhouette
• High-performance mechanics that really pull through

These are all really good points to consider, but fair is fair. If we mention the speak-ables, well, we should probably fill you in on the other end of the scale, too.

Everyone and everything has strengths…and then there are weaknesses. Unfortunately, the 2020 Triumph Thruxton RS falls in line with all other man-made machines and comes with a few flaws. Thus far, owners of the bike have reported a dislike for the jumbled mess that the cables and leads near the front of the bike are in; it seems there is no organization on the part of Triumph when it comes to these cables, giving for a poor appearance. Some have also complained about the fact that ordering the slightest items to help personalize the bike jacks the price up so badly that it doesn’t make sense in any light. This can make it difficult for riders to really get the bike they want and love. Finally, others have complained about the riding position, in other words, the seat positioning and adjustment. It seems that the way it’s designed won’t be appealing to most riders, but something like that is certainly a matter of opinion. 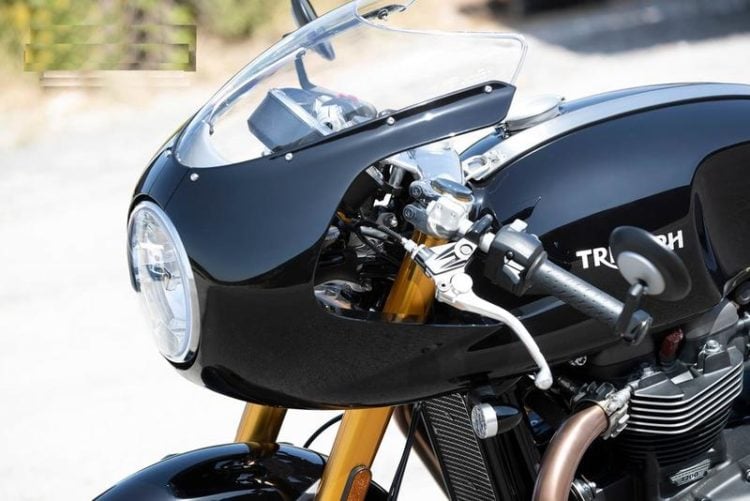 There have been Triumphs that could boast a low, affordable base price, and then there are those that are more than out of reach for many potential buyers. It’s that price range that runs right down the middle of the two that gets people thinking more than anything. This is one of those bikes. The base price for the 2020 Triumph Thruxton RS is $16,200, without any bells and whistles, of course. Personalization and other options can really jack the price up, as we’ve said, so be aware of that setback.

2020 has brought all of us a lot of unexpected ‘adventure’, to say the least. For Triumph, however, it shows them to be hard at work, and that can’t possibly be a bad thing. Buyer or not, arrange a test ride on a 2020 Triumph Thruxton RS and you’ll realize just what we mean. It’s always a good thing to get a little power into your life. Have fun out there, but above all, be safe.