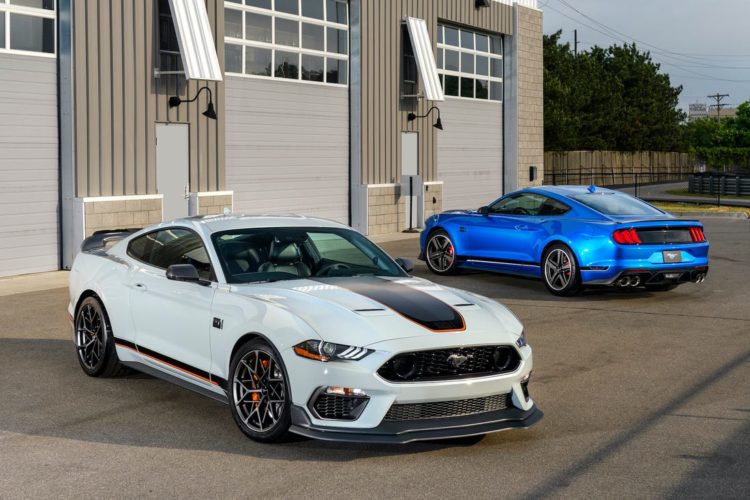 According to the Ford Corporation, the 2021 Ford Mustang Mach 1 is the the most track-capable 5.0-liter Mustang ever.” Indeed, the Mach 1 is designed to burn rubber at the track, so you’ll be happy to know that the auto designers at Ford were careful to give this Mustang the traditional Mach 1 exterior design, although we are certain some fans will miss the shaker hood. This is a fully, track-ready muscle car, one you can take to the track right out of the box, without any modifications whatsoever. The build is tough yet sporty, both inside and out, and the aerodynamic design and extra cooling systems ensure expert handing, braking and superior acceleration.

if you’re new to the phrase “bin parts car”, it simply means a car that has a mix of parts, so to speak. It means while the Mach 1 has some new and fresh parts, it’s also comprised of parts from different cars. For instance, the engine in the Mach 1 was taken from the Bullet Mustang. The rear subframe bushings, rear axle cooler, rear diffuser, along with rear toe links are from the Shelby GT500. For many, this may sound disappointing, as they were hoping for a brand new car from the ground up. But in reality, the phrase “if it ain’t broke, don’t fix it” applies here, as the Ford family of Mustangs carry with it, such a vast variety of superior, high performance parts, allows the Ford designers to make the best of both worlds. 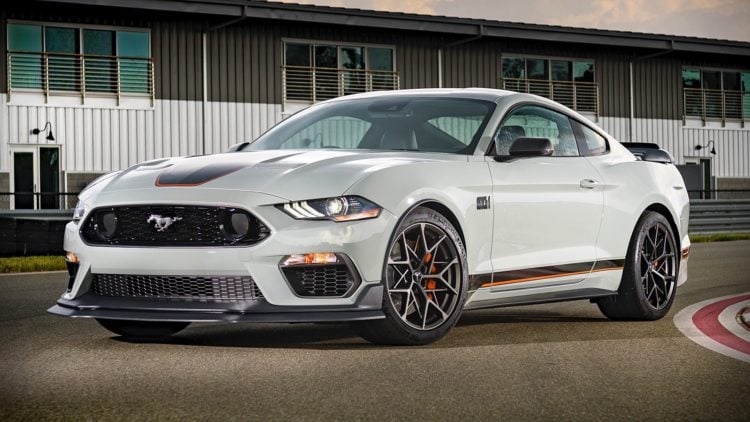 First things first, and that’s the engine. The 2021 Ford Mustang Mach 1 is said to come with a 5.0 liter, Coyote V-8 engine.  This engine houses a thundering herd of 480 horses and 420 pound-feet of torque. If you’re a Mustang aficionado, then you probably already noticed, that this is the exact same engine found in the Ford Mustang Bullet. In point of fact, the 2021 Ford Mustang Mach 1 is designed to be a replacement for the Bullet Mustang. While some fans might be a tad upset, as they were hoping for an engine with a bit more power, have no fear regarding the Mach 1’s overall performance. Whereas the Bullet was more of a road cruiser, the 2021 is specifically designed to be for the track.

First, lets look at the grille. It keeps loyal to the original design, coming with a 3 dimensional mesh sharp nosed section, and of course, the familiar Mustang logo is placed smack in the center of the grille, adding pride to performance for the Mach 1. Another item designed to improve performance is the menacing downforce front splitter, definitely designed to give a wicked powerful look to the Mach 1. Aerodynamics is ensured with the valance, side grilles, lower and two-piece upper grilles all functioning to improve engine cooling as well as help it slice through any wind resistance. 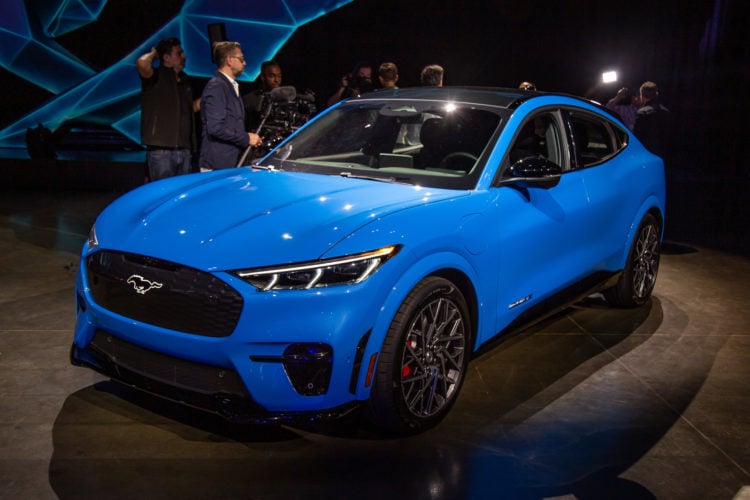 The 2021 Ford Mustang Mach 1 comes with a 6 speed manual transmission as standard. However, if you’d like, you can select a `10speed SelectShift automatic transmission. First seen in the 2018 Ford Mustang, the 10 speed was found to enhance 6the overall performance of the Mustang. The 10 speed gearbox benefits include faster acceleration with an enhanced drivability. This is due to the fact there are smaller steps between gears. So, in day to day driving commutes, the shifting will be much smoother than with a 6 speed. Finally, the 10 speed means fuel efficiency, and that equates to big savings for the pocketbook.

The designers of the 2021 Ford Mustang Mach 1 created some improvements to increase track performance. First, you have two side heat exchangers. One heat exchanger cools the engine oil, the second works to cool transmission oil. Plus, they also added a rear axle cooling system. Underneath, you have a fan which is designed to maximize air flow. These may sound like minor additions to newbies in the game, but those with experience under their belt realize the performance enhancing implications of such additions.

6. Sorry, But No Shaker Hood 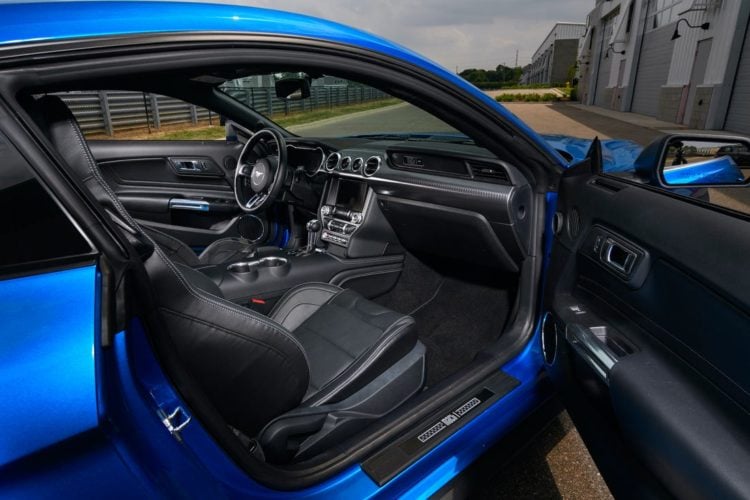 If you do a web search for insight into the exterior design of the 2021 Ford Mustang Mach 1, you may be a bit put off, as it is void of the traditional, muscle car shaker hood. Shaker hoods functioned as cooling devices, ensuring that the muscle cars powerful engine would be well aerated for optimal performance. These hood scoops also captivated onlookers via their raw, deadly and wicked appearance. Put a shaker hood on any car, and it soon took on a menacing appearance. But why no shaker on the Mach 1? According to designer Nick Terzes, “The original did not actually have a standard shaker hood, it was an optional piece of equipment for performance with carburetted engines.” The 5.0L Coyote V8, needless to say, isn’t carburetted.”

You’ve probably never given much thought to it, but suspensions are much more important than you’ve ever realized. It’s the power of suspensions that absorb the shocks when your car hits bumps or potholes. It’s the suspension that works to keep the wheels to the road, as much as possible. MagneRide is a type of suspension. It provides a comfortable, stable and secure ride via magnets. That’s right, magnet power. First seen on the Shelby GT350 in 2015, MagneRide is now found on all Ford Mustang vehicles, including the 2021 Ford Mustang Mach 1. 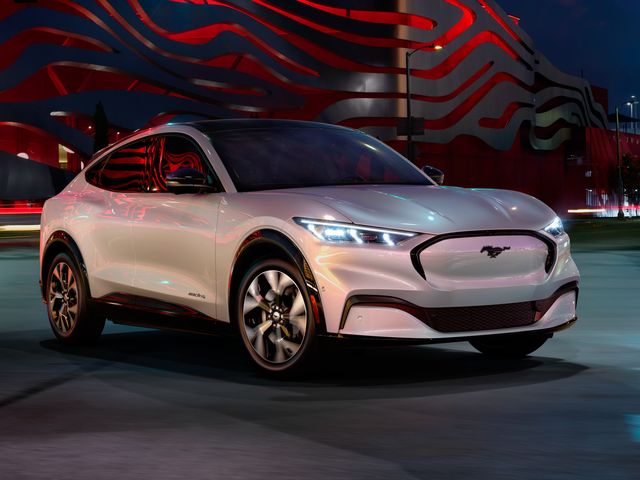 Fans of the iconic Mustang wanted a Tremec Transmission to be standard, and that’s just what Ford gave them. The 2021 Ford Mustang Mach 1 was handed the GT350 Mustang’s Tremic 3160, 6 speed manual transmission as standard. The Tremec comes with rev matching, as well as the GT350 oil cooling system, and twin disc clutch and short throw shifter.

The Handling Package is exclusive to Mach 1’s that use the Tremec, 6 speed manual transmission. Here, you get an enlarged, high downforce front splitter. Other features include a newly designed front wheel lip molding, a Gurney flap accompanies the magnetic swing spoiler, and the tire spats you see, are courtesy of the Ford Mustang Shelby, GT500. In fact, the Handling Package increases downforce to around 150 percent. But that’s not all, there’s also the 19 x 10.5 inch front and 19 x 11 inch rear aluminum wheels with the Michelin Pilot Sport Cup 2 tires.. 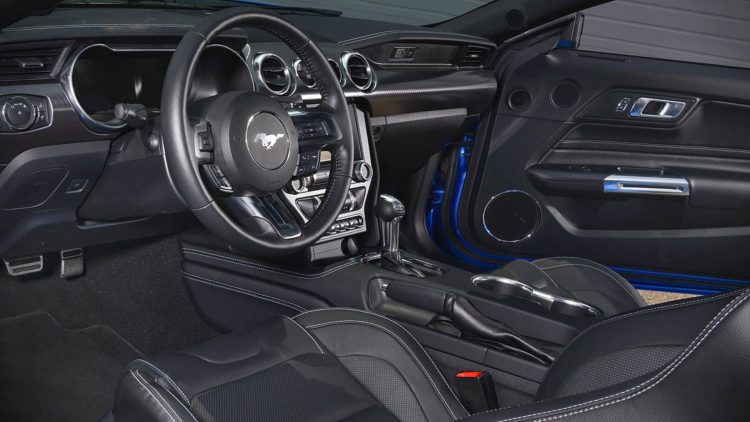 Even though this magnificent road and track monster won’t be hitting the showrooms until at least spring of 2021, the one thing we are sure of, is that the Getrag MT-82 6-speed, manual transmission won’t be in the package. This comes as a sigh of relief to Mustang fans everywhere, as the Getrag MT-82 gave many Mustang owners nothing but pain. In fact, it’s hard to imagine Ford even letting this piece of garbage even near one of their designs. The MT-82 was the source of frequent part replacements, gear lockouts and funky shifting. So, the fact that it’s nowhere near the Mach 1 is good news for prospective buyers.