Home
Cars
A Closer Look at the 2021 Hyundai Santa Fe 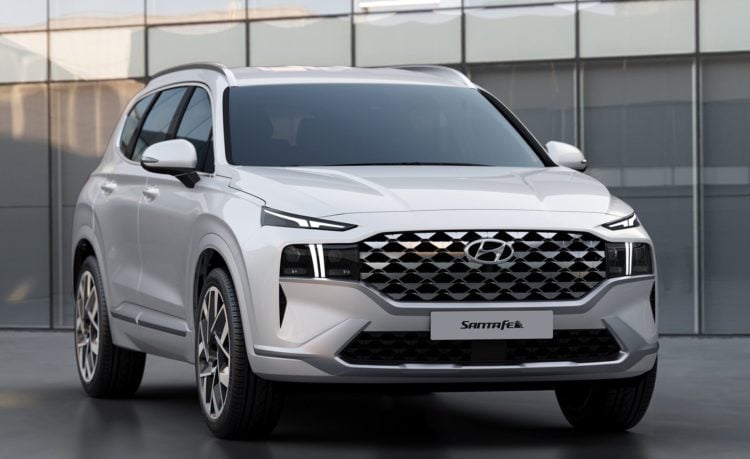 Hyundai Motor Company has experienced much success since being founded in 1967. Their first model of vehicle, the Cortina, was released in 1968, but the company has put out around 65 different models in the years since. It is one of the most popular vehicle brands on the road today, and Hyundai is proud to boast operating ‘the world’s largest integrated automobile manufacturing facility’.

In 2001 Hyundai unveiled the Santa Fe, a sport utility vehicle that is technically classed as a ‘mid-sized crossover SUV’. The vehicle was introduced to the public at the same time as the Pontiac Aztec and the Ford Escape, two vehicles with which it would compete on the market. The Santa Fe quickly became a favorite among drivers in the United States. So popular, in fact, that there were several occasions in which the company found they could not produce enough vehicles to keep up with the demand of buyers.

Today with thought we would focus on the 2021 Hyundai Santa Fe, introducing people to some of the new features and familiarizing potential new buyers with the model itself. Of course, we are going to do this by means of a ’10 Things’ list, so get ready to become educated on the ins and outs of the 2021 model of the Hyundai Santa Fe.

The 2021 Sante Fe has undergone a restructuring and a bit of restyling. According to Car & Driver, the interior has also been re-done, and there have been some very impressive mechanical changes, as well. The online magazine also states that the new Sante Fe looks ‘interesting’ compared to the model years of the past. If you liked the look and feel of this vehicle before, chances are it will win you over again. Besides a new grille and front end, it sports lights with a great new shape. The interior gets a new dashboard arrangement, a larger touchscreen display, and attractive, comfortable materials that have a much softer feel. Sounds like there’s a lot to look forward to here.

2. Beginning of a Generation? 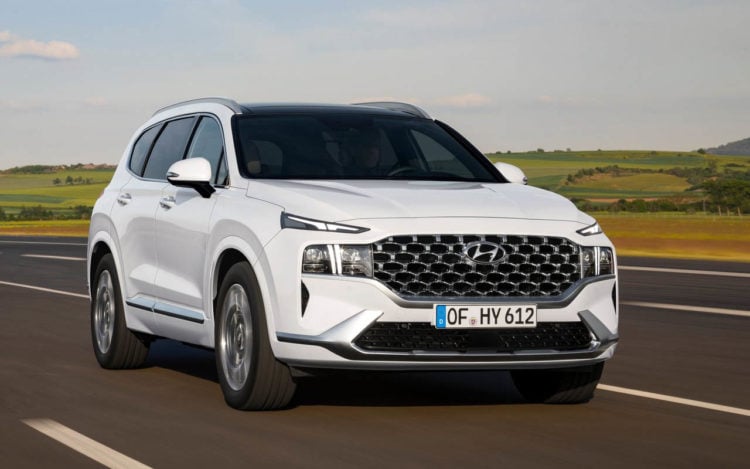 The new Sante Fe belongs to the fifth generation of the model, which was originally introduced in 2018. Typically a facelift on an automobile isn’t done until a few or more years into a generation, but this year’s model is still fairly young and has managed to get one anyway. We have to say the new model is definitely handsome, and the five generations before it have been kind, so to speak.

Well, it looks real good, but what’s it got? That’s a great question, and we’re here to fill you in. First off, some changes have been made regarding the chassis. Hyundai relocated the parts that are heaviest at the bottom. This puts all the weight at the core of the vehicle and provides for improved control. The bottom line here is that this seven-seat crossover is actually supported by a completely different platform, and it works. 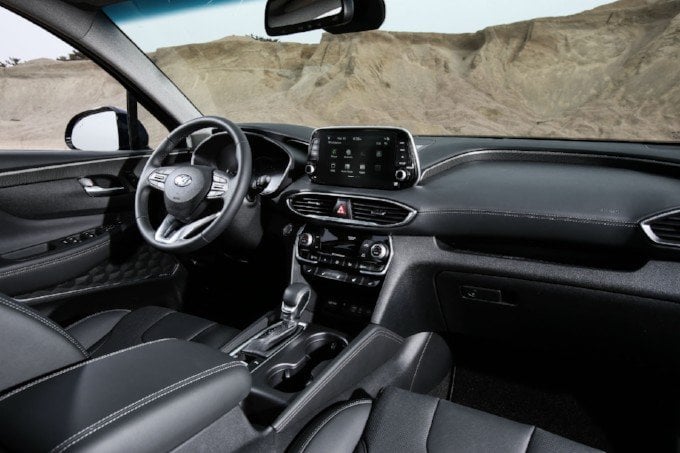 As of this writing there hasn’t been much divulged in the way of the engine, transmission, and other ‘motor-vating’ parts. It is highly likely that Hyundai will be employing the use of the same level mechanics as before. The current options when it comes to the engine are a 2.4 liter, 4-cylinder that puts out approximately 185 horses, or a 2.0 liter, 4-cylinder turbocharged engine that puts out 235 ponies. All of that power is sent to your choice of front wheels or all wheels by means of a gearbox that is an 8-speed automatic. Here’s looking at you, Kid.

5. Does It Come As Electric or Hybrid?

At the current time, it does not, but the manufacturer has it set up to easily be transferred to electric in one form or the other, so chances are that the Santa Fe will soon be available as such. As a matter of fact, this vehicle is probably going to be equipped with an electric power train in Europe very soon. As we all probably can guess, this means these options will come to the States sooner, rather than later.

6. A Variety of Modes 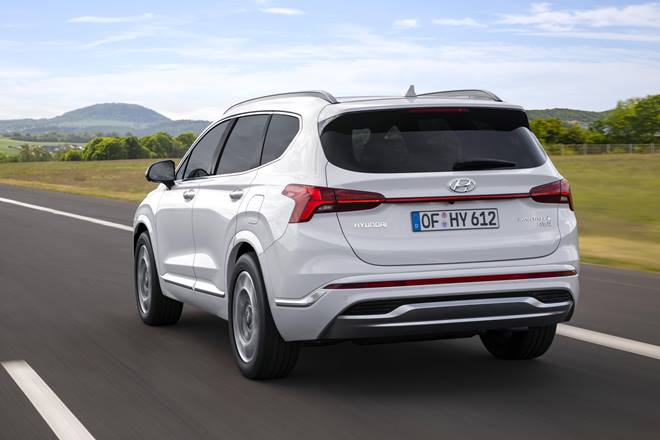 The 2021 Santa Fe manages to add some other perks, as well. The SUV comes with four drive modes, which are easily accessible to the driver by means of nothing more than the turn of a know. Choose from Comfort, Eco, Smart, or Sport, depending on the type of driving you are doing; then you have terrain options like Sand, Mud, and Snow. It seems they’ve thought of just about everything, but there is always room for improvement.

7. Then there are the Cons…

While there are tons of pluses when it comes to the new Santa Fe, there are always going to be those little details that seem to always find themselves at the end of the pointed finger. According to Edmunds, the standard 4-cylinder provides an equal amount of power as a compact-sized vehicle, and this results in it feeling weak, like it’s pulling way too much weight when it comes to the body. Unfortunately, this is an unpopular characteristic among…well, drivers in general. I think we can all agree on that. 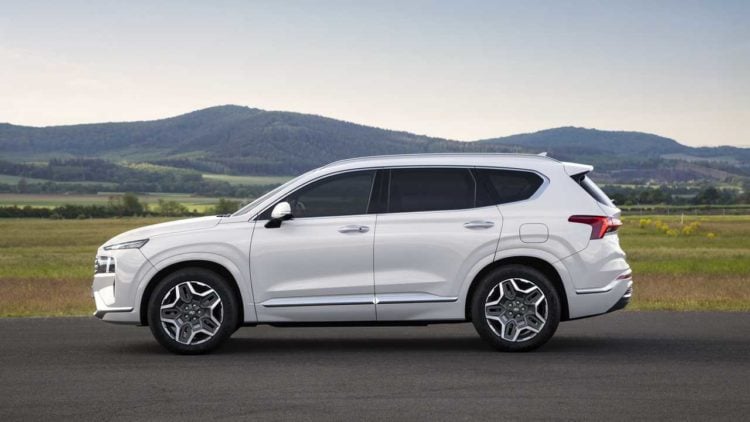 On the other side of the coin, Edmunds goes on to say that the new version is roomy and comfortable, with an attractive set up and a sleek appearance. It has a larger touchscreen, great sound system, and conveniently-located controls. Drivers will see that the interior offers many more features than some of the Santa Fe’s competitors, so these points alone actually put, and keep, this vehicle in the loop, with the electric drivetrain option being the only plus that’s missing.

9. Those Space-Aged Headlights, Though!

Well, yes. The headlamps on the new Santa Fe look like they may have come directly from an installment of ‘Star Wars’, however they are being met with mixed reviews. According to Auto Week this feature is a good thing, something to make competitors jealous. On the other hand, some are saying the design seems to take over the whole auto, almost sliding down the sides, so to speak. With that being said, we think it’s sexy and unconventional, and we love it. 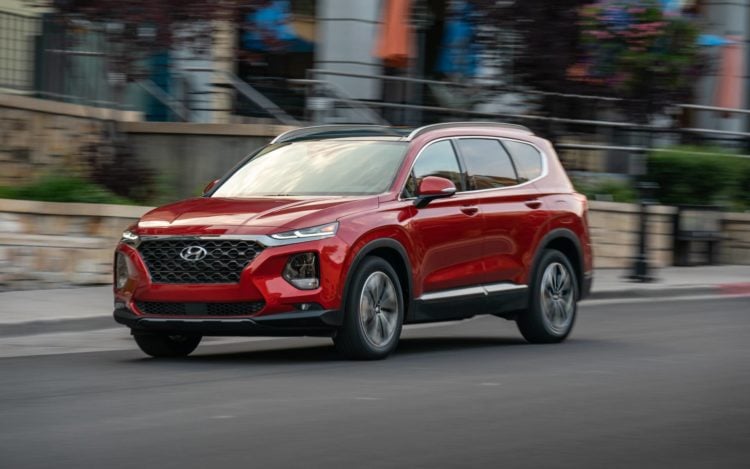 Ah, we arrive at the root of it all. Yes, for everything there is a price, and the 2021 Hyundai Santa Fe is no exception. If you go with the basic standard model, without all the bells and whistles, you are looking at spending about $26,275. If you were looking to spend a bit less, we think you should definitely consider the entire package: Despite the cons, which are easily eliminated through factory upgrade, you have a heck of a vehicle here. It’s family oriented, room, state-of-the-art, and a bit on the sporty side too. Consider the extras, and we think you’ll come to appreciate the offering.

In a nutshell, the 2021 Hyundai Santa Fe does an exceptional job of staying true to form when it comes to being a Hyundai vehicle…and this is a high point in its favor. After all, Hyundai has been a leading car manufacturer for some time. The key points to keep in mind are the cluster of improvements and features, as well as the facelift, that make this a fresh, new vehicle for anyone in the market. It’s definitely something to consider, but make sure you consider all the fine points, indeed. In the meantime, have fun on the road, and be safe.