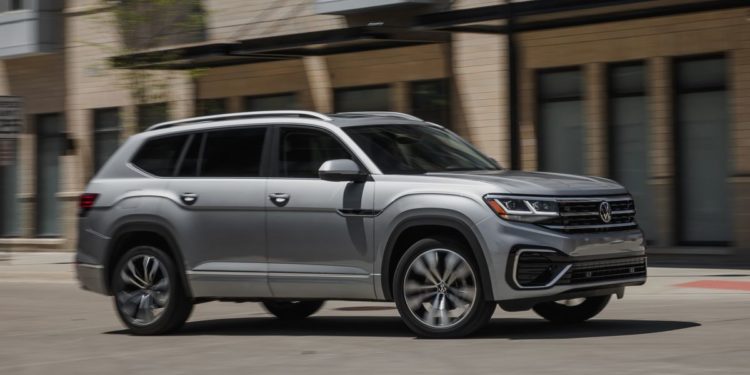 Since 1937 German auto manufacturer Volkswagen has designed and produced vehicles that have managed to set the standard for generation after generation. Even the name, which means “people’s car” in German, speaks to how they have reached out to the world through the vehicles they produce. Since the company’s humble beginnings, when only one in fifty Germans could afford an automobile, Volkswagen has put affordable and trustworthy cars on the market for the common person.

While cars, of course, remain the basis for all we see today when it comes to street vehicles on four wheels, the crossover SUV has taken a very hot spot on the popularity list. Of course, Volkswagen has to keep up with the changing times, and their crossover effort, which was first unveiled in 2017 for the 2018 model year, the Atlas, has proven formidable on the market. The Chattanooga, Tennessee manufactured crossover is the largest vehicle the Volkswagen Group produced on their MQB platform, according to Wikipedia. Now it’s 2020, and the Atlas is still a strong one for the legendary company.

So, let’s dig into this SUV a bit more, shall we? And what better way to do that than to break things down in one of our famous ’10 Things’ lists? Well, there is no better way, and because of that simple fact we have compiled a nice collection of facts about the new 2021 Volkswagen Atlas. Whether you’re shopping for a new crossover or simply like keeping up with all things “up-to-date”, you’re bound to find a tidbit of new information about an affordable crossover that pretty much offers it all. Read on to discovers 10 things you didn’t know about this car:

While it’s true that this is only the third production year for the Atlas, Volkswagen has seen fit to give the large crossover a facelift. Yes, the SUV has undergone some changes in its appearance, but some of the changes made also manage to cater to the need for pedestrian safety. One such change is the newly structured bumper, which not only adds to the overall length of the vehicle, but by design also gently pushes pedestrians out of the way, if you can imagine. Pretty cool feature, particularly since it contributes to the appealing appearance of the crossover.

With a new logo comes many opportunities to toss your brand name around, and Volkswagen takes advantage of this fact. Check out the fresh steering wheel design, which features the logo. Also on the inside are three rows of seating which are upholstered in double-stitched leather that is available in several colors, an 8” touchscreen (on all but the S model) that provides control for the infotainment center, and wireless smartphone charging. There are many more extras and comforts available that make the Atlas a killer crossover choice.

The Atlas comes in several different versions, or trims, so it’s easier than ever to discover the one that’s right for you. Each goes up in base price, as it offers more options that the previous version. Available trims are as follows:

Each offers progressively better available options, which makes the 2021 Atlas a great choice for most anyone interested in the crossover SUV, according to Car & Driver.

The R-Line is a trim option available with the SE and SEL models of the Atlas. It is a sportier trim option, with 20” wheels, and side-skirts, badging, and bumpers that are all its own. An exclusive infotainment screen, steering wheel badging, pedal caps in stainless-steel, and many, many more benefits. Check out all the new R-Line versions of the Atlas have to offer.

When You Want the Great Outdoors…

When it comes to the 2021 Volkswagen Atlas there is even more good news. If you are a traveler, love the water, or simply need to be out in the elements to be happy, this is definitely the crossover for you. Hook up your RV or watercraft easily, with no worries. You will be able to tow up to 5,000 lbs. with the Atlas, your property line at home is no longer your limit. Take to the outdoors and love it whenever you desire!

The following are the specs for the Volkswagen Atlas S for the 2021 model year:

(Information on specs courtesy of MotorTrend)

The Icing on the Cake

One of the best features of the 2021 Volkswagen Atlas doesn’t have anything to do with the spacious interior, the power the engine provides, or the sporty body style. Better than that, it is the four-year, 50,000-mile warranty that extends from bumper to bumper. In a nutshell, you can count on things working right, and if for some reason things go awry, well, Volkswagen has your back. It’s nice knowing you don’t have so much to worry about, isn’t it?

As you may have noticed, the current trend in crossover styling mostly offers a curvier body, less ‘edge’, so to speak. But the 2021 Atlas offers a body that is, indeed, of the boxy variety, giving it a larger, more imposing appearance, to say the least about its effectiveness. So for those of you who prefer the appearance of their vehicle to be more ‘SUV’ than ‘soccer family’, this is definitely the one for you.

These are actually the best things about the Atlas, even above the warranty. When it comes to safety Volkswagen is a company you can count on. The new Atlas comes with Pedestrian Monitoring, six airbags, rear traffic alert, rear-view camera, Forward Collision Warning with Autonomous Emergency Braking, 4-wheel anti-lock disc brakes with Brake Assist, a blind spot monitoring system, hill-hold control, and an Automatic Post-Braking system. The list of features is impressive, but even more so when we consider the precious cargo it carries

So When Can I Get One?

Believe it or not, there is no wait. The 2021 Volkswagen Atlas was released for sale to the public last May, so the only thing holding you back is your own frozen feet. If the Atlas is a good match for you, head on down to your local Volkswagen dealership and check out what they have to offer. We’re confident that you’ll be glad you did.

There they are…ten facts about the 2021 Volkswagen Atlas that you likely didn’t know about the crossover until now. So, here you are, equipped with knowledge, duly funded, and excited about getting a new vehicle. If you have decided on the Atlas you should be excited; we think you’ll love it for years to come. Get out there and make your purchase so you can get this show on the road, but above all, be safe doing it.