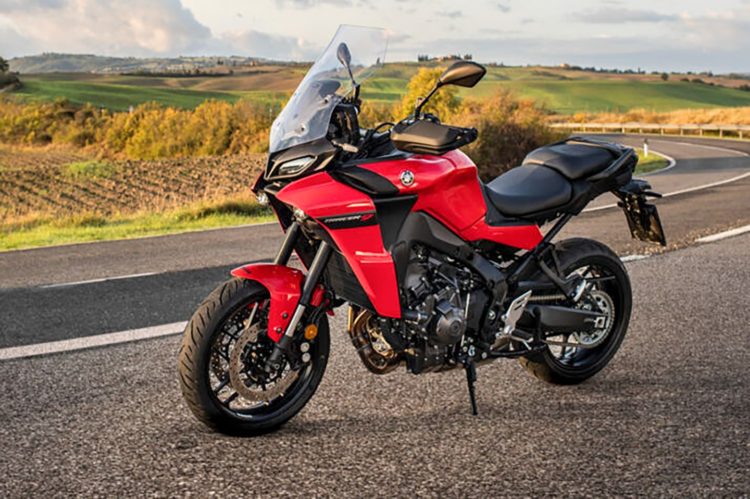 Yamaha has done it again with a new release of its middleweight sport-touring motorcycle, just entering its third generation. It’s a new model called the Tracer 9 GT, and it has built on the previous members of the family to give riders what they’re comfortable with from the past while infusing the bike with the modern performance features that are currently in demand. They built this machine new from the ground up, while it still retains the DNA of its predecessors. It’s a more powerful state-of-the-art bike that is deserving of a closer look.

Yamaha Motor Sports, confirmed that the Yamaha Tracer 9 GT is equipped with an 890 cc liquid-cooled 3-cylinder engine that is completely new for 2021. It’s a DOHC, 4-valve per cylinder with fuel injection. The engineers at the shop developed the engine in-house with a downdraft intake, a bore stroke of 78 mm, and a compression ratio of 11.5:1 for enhanced torque and improved power delivery. All of the engine components received a redesign to maximize performance. The result is an increase of nine percent in performance with a boost in fuel efficiency to 49 miles per gallon.

Yamaha also built a new frame for its middleweight touring bike. The frame is made of lightweight aluminum materials and tuned for maximum performance for its specific model. A new die-casting technology that employs the use of controlled filling processes has made it possible to create thin sections for the die-cast Yamaha frame that has cut down the weight over the 2020 edition of the tracer from the 900 series, trimming the thinnest dimension from 3.5 mm to a mere 1.7 mm with no sacrifice of strength and durability.

Yamaha joined forces with KYB to develop an electronically controlled suspension that delivers high sporty performance while retaining elements of comfort for the rider for the new Tracer 9 GT. The new suspension obtains input from the IMU along with the Engine Control Unit and the Hydraulic Unit to calculate the best settings for damping the suspension. The technology just keeps getting better. The new suspension responds to real-time conditions and makes the necessary changes to deliver the optimum ride and performance.

Rider Magazine, offers a positive review of the Tracer 9 GT with its more powerful engine and lighter frame, but it highlights the state of the art electronics package that started with the new semi0active suspension. There are a few features that merit a closer look and explanation. The new Tracer received a new tech development called the 6-Axis IMU, or Inertial Measurement Unit. It’s a revamp of the unit used in the YZF-R1 with all the functionality, with a few nifty tweaks. Yamaha engineers made it 40 percent lighter and 50 percent smaller after making improvements on the layout of the sensors. Three rider aids receive data from the IMU to optimize performance. These include the traction control system, the front wheel lift control system, and the slide control system. It’s retained the best features from the past while imparting a few new ones for the sake of evolution. The Hydraulic Control Unit controls the Brake Control System. This system modulates the brake pressure of the front and rear brakes following the information it receives from the IMU and speed sensors in the front and rear wheels. These systems all work harmoniously in sync to give riders more options and control than ever before. The rider is in charge of maximizing the bike to its maximum performance potential.

The 2021 Yamaha Tracer 9 GT celebrates its third generation by coming packed with new features. It has full LED lighting. That includes cornering lights. There’s a desirable separation of high and low beam units. Illumination spread and intensity have been improved for enhanced visibility while softening the light to avoid harsh and blinding brightness. Multiple LEDs in a complicated distribution cover a broader range of illumination. This inspires greater confidence for night riding. The new design is more highly functional for the cornering light system, carried over from the FJR1300ES.

The 2021 Yamaha Tracer 9 GT was released in April of 2021. It’s available in a choice of two models. The Liquid Metal version or the Redline. Both are offered at a starting price of $14,899. As always, you can add more options to either of these bikes to further customize your riding experience. Yamaha is to-notch at offering a host of upgrades and optional gadgets and devices to suit your personal preferences.

The 2021 Yamaha Tracer 9 GT is just what the doctor ordered for those who like to hit the open road on a middleweight machine. The design team has gone over the top of an already high bar to deliver what arguable could be one of the best midsize tourers in its lineup. It’s a sporty and lean bike with an attractive slim profile. It’s a new take on an old favorite that we think will be a big hit for 2021. They’ve carried over the best features from the 2020 edition and improved those that had room for improvement. The result is a bike that is practically new from the ground up, with a host of new technologies intended to enhance rider comfort and take the performance of the bike to the next level. Yamaha went big for its third generation of the Tracer with the new 9 GT. While it’s not the right choice for everyone, It’s likely to find a strong audience with those who prefer a lighter bike with smaller proportions. It caters to those who prefer a smaller size but who also have a strong desire for an extra punch of power when the mood strikes.