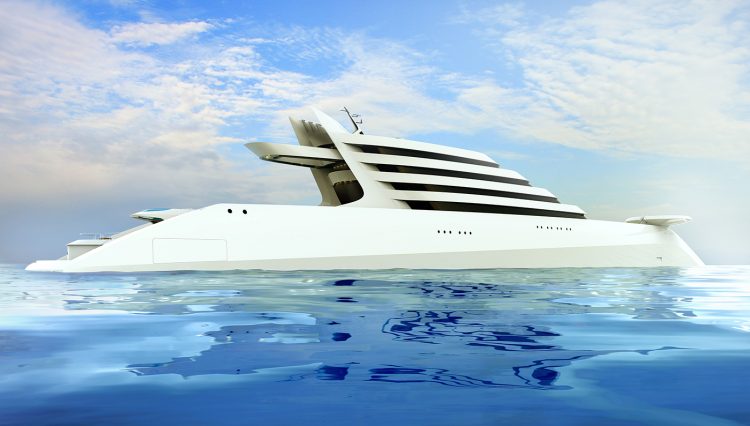 Superyachts are taking the water by storm today. Between 1997 and 2008 alone, there was an enormous increase not only in number, but in size and popularity. Today, superyachts are bigger and more luxurious than ever. Yacht builders are continuously trying to bring the future to the here and now, using the latest innovative technologies and designs to create bigger and fully customized yachts that would impress even the biggest superyacht enthusiasts. World-renowned yacht builder, HBD Studios, has recently released its newest superyacht concept, and if it is built, this 623-footer will be the second largest superyacht built to date.

HBD Studios is located in Milan and was founded by H. Bekradi in 2014. Bekradi has an interesting background that includes extensive work in car and product design. Today Bekradi has almost completely turned his focus and interest into superyacht design. And with his experience, he has brought a whole new approach to yacht building that is taking the meaning of superyachts to a whole new level. At the center of Bekradi’s creations is the desire to meet his clients’ expectations while constantly trying to maintain the perfect balance between “Style and Practicality.”

Bekradi’s design approach in the field of transportation derives from his Middle Eastern roots, his training in Italian design and the love of modern design. His work experience includes a wide range of projects in the automotive and consumer electronics field, as well as product design. He has worked as a freelance associate designer, alongside former design director, Chris Ban with the BMW Group and has collaborated on numerous projects for major companies, such as Samsung Electrons and the historical Italian lightning brand, Targetti Group.

Since HBD Studios opened in 2014, Bekradi has been successfully designing luxury yachts as well as consulting with various shipyards in various countries, such as Germany, Dubai and the United Kingdom. His approach to yacht design is much broader than the typical approach. His design factors include, user experience onboard, along with a user interface design, with both factors typically are not as focused on, according to Bekradi. This approach helps to bring designs of the future into the present. One such example of Bekradi’s visionary work is his newest superyacht concept, L’Amage. 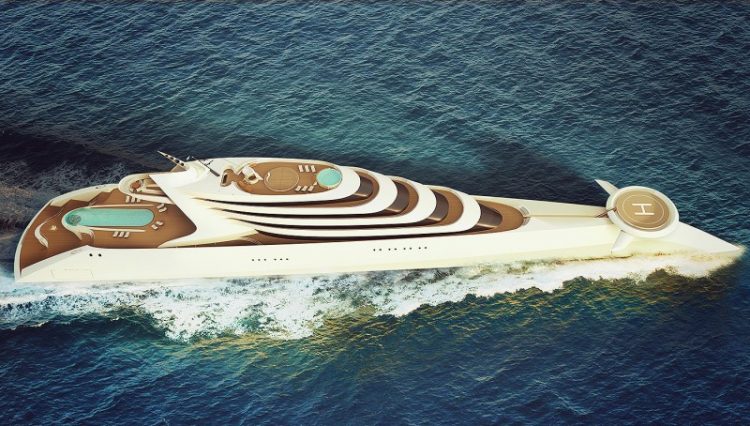 In September of this year, HBD Studios debuted its newest concept in yacht design at the Monaco Yacht Show, the L’Amage superyacht that boasts of 623 feet (190m) in length and 94 feet wide, which would make it the second largest superyacht after the Triple Deuce, which extends to 728 feet and is scheduled to be completed in 2018. L’Amage is an extraordinary luxury yacht that has been given a futuristic design using current technology and the collaboration of naval architects. The newly developed conception of smooth angles in combination with soft, beautiful contours created a breathtaking vessel that will be the envy of the waterways for sure.

The luxury superyacht is designed to accommodate up to 28 guests and 70 crew members. It is said that there are many high end features Bekradi will be including in his thoughtful design plan, both inside and out for the L’Amage that will make this one of the most innovative, luxurious and functional superyachts on the water. Some of the most impressive features that we know of that will appear on L’Amage include:

One of the most forward-thinking propulsion technologies available today in the nautical industry was used for L’Amage; CODAG, or (combination of diesel engines and gas and turbines). This technology combined with controllable-pitch propellers will give the L’Amage the ability to reach a maximum speed of 32 knots. This is possible due to the 95000hp it gets via 2 diesel engines that are designed to run simultaneously with 2 gas turbines, a propulsion system that is typically seen in warships where a speed that is faster than the average cruising speed would be needed. A unique plan for a unique superyacht.

The yacht will have a fuel capacity of 1500 tons and will allow the yacht to attain approximately 6000 nautical miles independently without needing to refuel. Of course, when he does, it will only cost him about $6000. One of the major players in this design was Christoph Kuhnert of the Yacht Naval Architects (YNA). He was consulted on the feasibility of the propulsion concept as well as the design and shape throughout the design process.

Although there are other futuristic design-type superyachts already out on the waterways today, this one will set them apart with everything from the unique body style and design to the amenities it boasts it will be full of. This will truly be a one-of-a-kind superyacht that will set the bar high for future yacht builders and will earn Bekradi and HBD Studios some serious accolades for his accomplishment in designing one of the largest and said to be one of the most luxurious superyachts out there, to date. There’s not many available today that fall in both of those categories.

Bekradi admits that there aren’t many out there that could afford a superyacht to this magnitude and its design features, but says that the design solutions he and his designers have created can be scaled down to fit smaller vessels as well, including a 90 meter superyacht or 75 metre explorer version. Bekradi has the ability to allow for customers to envision their ideas for which he is able to come up with solutions to help new yacht owners create the superyacht of their dreams and maintain the budget they have set.