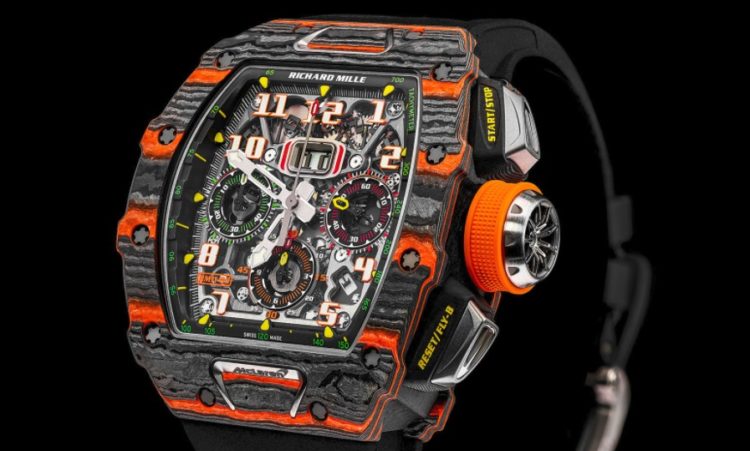 There’s nothing more exclusive than a watch that’s only available to select current owners of a specific brand. That’s the logic behind the sales of the new McLaren Chronograph—the Richard Mille RM 11-03 McLaren Automatic Flyback. Richard Mille has been designing and making watches for McLaren since 2016. Their first collaboration, the RM 50-03 McLaren F1, sold for a million dollars, the same price the McLaren Formula 1 was selling for. The RM 50-03 broke records as being the lightest split-second chronograph with a tourbillon ever made. That watch is a technical marvel that’s been unrivaled since its release last year—at least up until now.

Famous watchmaker Richard Mille has recently activated their partnership with McLaren Automotive to create a stunning limited edition watch that is only available for sale to a very specific clientele—owners of McLaren’s Ultimate Series. This series of performance cars include only 3 models, all of which are sold out. The first two models are the F1 and P1, and both have been sold out for a while. The last model, Sienna P15, was launched alongside the watch during the most recent Geneva International Motor Show, but it has since been sold out as well.

The latest Richard Mille has all the design aspects that would strike anyone to be exclusively Richard Mille’s. The RM 11-03’s design is actually based on the stock second generation RM 11, but with the wonderworks put in by McLaren Design Director Rob Melville and Fabrice Namura, a Richard Mille engineer, the watch has become representative of everything that is McLaren.

The RM 11-03 is another lightweight piece, using a combination of two carbon composites that can only be found in Richard Mille watches: Carbon TPT and Orange Quartz TPT or Thin Ply Technology. TPT is made of ultra-light carbon composites layered with silica fibers at various angles to each other. This creates a unique striped pattern once the materials are cut. The watch itself measures 49.94mm in length, 44.50mm wide, and 16.23mm thick.

The pushers on the titanium chronograph are designed to mimic the look of the McLaren 720S headlights. The titanium bezel inlays at 6 and 12 o’clock are also modeled after a McLaren, specifically the F1’s air intake snorkel. Another McLaren feature that is clearly evident in the watch is the titanium crown that is formed like the wheel rim of a McLaren, just covered in bright orange rubber.

The specs of the RM 11-03 are very similar to a standard RM 11. This includes double barrels for a power reserve that can last 55 hours and an annual calendar that features flyback function and oversized date and month. There’s a 60-minute countdown timer at 9 o’clock and a 12-hour totalizer. Famous movement maker Vaucher built the base caliber for the watch and Dubois-Depraz, a complications specialist, designed and built the chronograph module. Both the base plate and bridges on the RM 11-03 are in black-coated grade 5 titanium, a design factor that not only sets the movement of this watch apart; it also gives it a greater rigidity. The end result of everything is a watch that feels extremely light and well balanced, which in turns results into a highly improved wearability.

The partnership between Richard Mille and McLaren began after McLaren’s split with TAG Heuer after 30 years of working together. Richard Mille and McLaren have since created a couple of timepieces together, and we expect them to do so for at least a few more years. The Richard Mille RM 11-03 McLaren Automatic Flyback Chronograph is limited to production of only 500 pieces and each one is priced at just under US$190k. As mentioned previously, it is only available to owners of the McLaren Ultimate Series, and recent purchasers of the Senna P15 can choose watches that have the same serial number as their cars, quite a sentimental touch coming from both companies. That’s as much uniqueness as you can get out of the watch though, since all of them will come in only black and orange. If you’re not the biggest fan of the color combination, at least we hope you’re a fan of innovation because this watch will be the best in Swiss innovation right on your wrist.