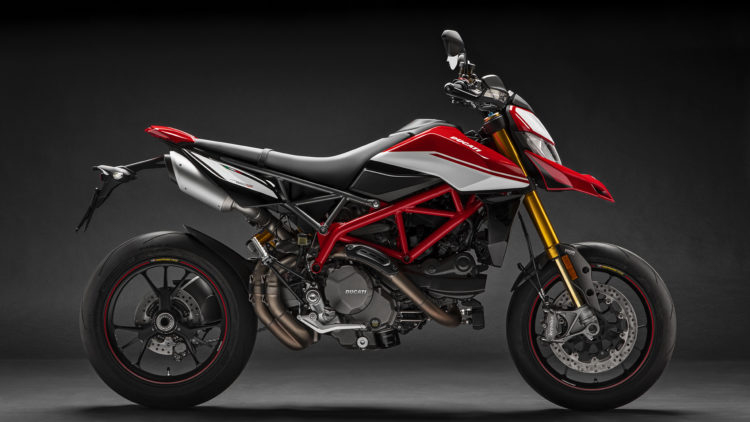 When it comes to hooligan racing the Ducati Hypermotard sport twin has been a top contender and it’s now in its third generation with its sport naked iterations. The Hypermotard 950 is their latest rendition with updates and redesigns that perform three important functions. The satisfaction of the upcoming Euro 5 regulations along with improvements to the bike’s versatility and civility are what’s new and the engineering team has done so without losing any of the credibility of the wild and rugged street bike that shows up on the track to compete.

The 2019 Ducati Hypermotard 950 SP has had a few tweaks to lighten its overall weight by 9 pounds thanks to a slimming of the fuel tank which also reduced its capacity. Updates to the chassis, engine and electronics of the bike have given it a performance boost as well. The bike is equipped with a 937cc Testastretta 11 degree twin cylinder engine which is the same as the Hypermotard 939 which came before, with the exception of some refinements in the tuning that are seen int he Ducati SuperSport.. It gets a bump in the compression ration along with a revision of the exhaust cam profile, bigger throttle bodies and the horsepower is bumped up by four over the 939 nudging them up to 114 @ 3,000 rpm.

The Hypermotard 950 also receives the Ducati EVO electronic rider aid package which uses a six axis Bosh IMU for improvements in traction control precision, cornering ABS and wheelie control. The IMU is used for the Quick Shift EVO as standard issue on the SP model and it’s optional at your discretion for the Hypermotard 950. Thanks to the EVO suite, the bike is outfitted with eight level adjustment along with three cornering settings for the ABS. The suite allows you to make changes in the modes without the need to come to a stop.

The Hypermotard 950 receives a brand new TFT instrument display that you might find comparable to that of the Panigale V4 with analog style tachometer surrounding the gear position indicator. When the rev move past 6,000 rpm the color of the tachometer changes and it conveniently flashes when you’re approaching the rev limit. The traction and wheelie control intervention presents a yellow indicator light

The handlebar is wide and offers agility for making hairpin turns with communicative suspension for side to side movements. When testing the bike you discover that the bumps in the road are handled well and the braking support is hard and efficient. The saddle height of the SP version is 35 inches which is about .8 inch taller than on the standard Hypermotard 950.

The Marzocchi fork is more plush and the Sachs shock for the SP model combined with the reduced seat height make the SP a bit more comfortable as a cruise. Either version of the Ducati Hypermotard 950 are excellent choices but there are a few notable differences that could steer you in one direction or the other. The one note of caution that we would be remiss not to mention is that you’ll need to keep an eye on the speed if your intention is to keep it legal while you’re cruising with the Hypermotard 950, either edition.

The fuel capacity of the tank is 3.8 gallons which isn’t bad considering there’s been a slight slimming of the design. The Sachs monoshock adjustable is an enhancement to the rear suspension combined with the 45 mm Marzocchi Fork and a 34.2 inch seat height, it’s a bike that is comfortable to ride, is incredibly agile and when your dress up the standard 950 with the optional electronic driver aid package it’s totally sweet. When you show up at a dealer to make a purchase ge ready to pay $13,295 for the standard Hypermotard 950 as the base price without the EVO aid suite as an add on package. If you set your sights on ownign the Hypermotard 950 SP edition it will set you back $16,695,