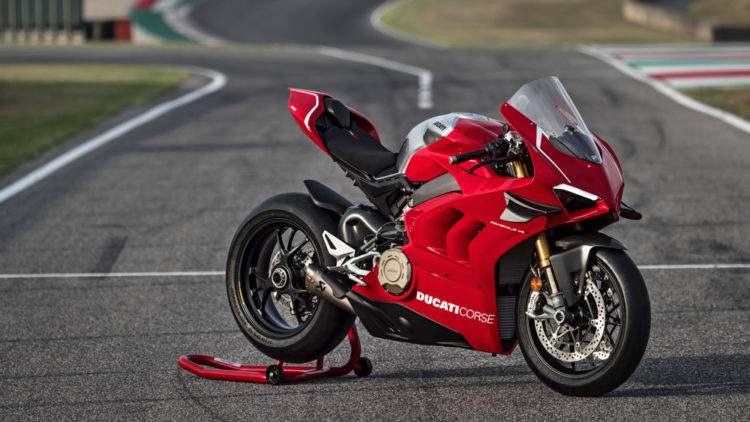 The 2018 version of the Ducati Panigale V4 S was arguably among the top 10 superbike models in the world. The power and torque paired with the unique sound of the engine were remarkable to riders who gave it high ranking for performance and aesthetic. The 1,103 displacement made its impression in the superbike class of racing. It was a machine that was well-suited form track domination, but it may well be unseated by it’s younger sibling, the new 2019 Panigale V4 R. In compliance with rules governing FIM homologation, 500 of these bikes will need to be produced within the next 2 years. There must be 125 of them before the first race.

Ducati’s most powerful superbike ever

The 2019 Panigale 4 R is promoted as and expected to be the most powerful superbike that the Ducati brand has made yet. The potential conflict for Ducati in in engineering this powerful superbike was in finding a way to comply with the noise regulations for the North American model of the R. This made it necessary for the manufacturer to do a bit of tempering to the exhaust. Still it will offer 209 horsepower at 13,250 rpm. The maker dispensed with the Akrapovic titanium racing exhaust which gives the other versions of the R a hp rating of 234 at 15,500 rpm. We’re obliged to take a closer look at the new bike

The fork is an Ohlins pressurized NPX 25/30 and other parts of the chassis feature a TTX 36 shock and manually adjustable steering damper. The swing arm pivot brackets are made of forged aluminum with four position adjustment. A race kit item that is available is a CNC machined STM-Evo dry clutch which is compatible with the V4 engine’s wet clutch. The.re’s no need to worry about the clatter of the dry clutch because a standard noise dampened cover takes care of the issue. The carbon fiber cover adds a pleasant aesthetic.

The frame is designed for the maximum cornering capability along with improvements in rider feeling by engineering large holes cut from the main spars n the bare frame. The connecting rods are Titanium with short skirt box in box pistons, a polished crankshaft and higher lift cams that are essential for the boost in horsepower of the Panigale V4 R.The engine used in the new 2019 Panigale 4- R is known as R specific and was intentionally developed with its potential for boosting power, as well as imparting the aesthetics of beauty. Each part is made in this fashion. The intention of saving weight is the driver behind the downsizing of the drive chain of the R to a #520 from the previous #525.

Riding for speed and taking control

One could imagine that they are in control of the new Panigale V4-R sportbike, and to some extent this is true, but it takes self-control to leash the beast that is found in the new model. The R has the capability of tearing down the track and it takes a bit of knowledge of the controls offered to fully master its full potential.

The new Panigale V4-R has a comfortably padded saddle with electronic rider assistance setting offering DTC for traction control, tempered Sport-mode throttle response and 8 levels of DSC for slide control along with 2 levels of DWC for wheelie control, and 3 levels of engine brake control (EBC). It also has cornering ABS which is active in the rear and the front. All of this is located on the TFT dash of the Panigale.

Production is underway for the new Ducati Panigale V4-R and the United States will see a slightly less powerful version. We’re doubtful that American owners will be able to resist the urge to outfit their bikes with the Akrapovic exhaust, but that’s between them and their maker. The sacrifice of 30 hp will make a difference for some and others will go by the rules and be happy with the prospect of ownership. The new 2019 Panigale 4V-R will set you bac kabout $39,995.