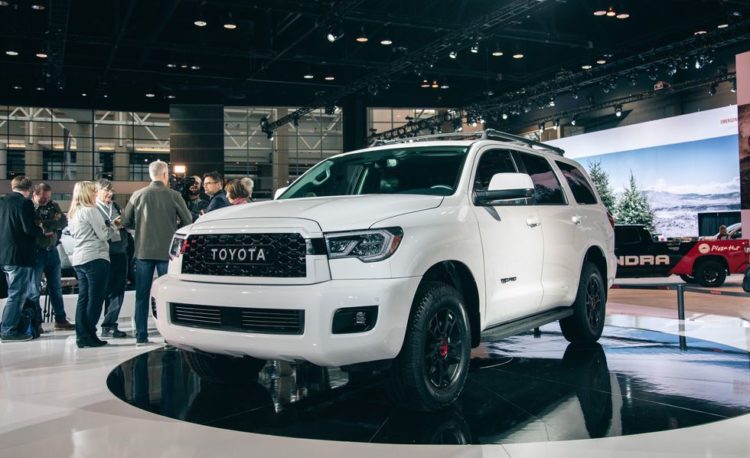 Toyota is coming out with a new Sequoia that has the size of a behemoth in a capable and attractive new off road model in a full size truck based SUV that they’re welcoming into the TRD Pro fold. It’s their latest contribution to the lineup of Toyota’s most hard core off road capable vehicles.

All in the family design

The new 2020 Sequoia will bear the DNA of the Tundra in an edition that is more akin to a full size pickup with a few major tweaks that add to its ruggedness and tough capabilities. It gets the upgrade to stronger Fox internal bypass dampers in both the front and in the rear. It will also come standard with BBS wheels in an 18 inch size with a front skid plate, a roof rack and running boards that give it a more rugged aesthetic. To add to the visual appeal, the grille design has been altered and the new update will include the Toyota logo. The automaker is also offering it in some cool different colors such as black, white, gray and an Army Green which is being billed as an exclusive hue that is particular to the TRD.

The new Sequoia will be offered with a 5.7 liter V-8 engine with the power to pull this beast and propel it through multiple environments. This will be paired with a six speed automatic transmission. They decided to stay with these options because there was no need to change what was already working with no complaints. All wheel drive will come as a standard feature. It’s an option in the standard models which come with standard two wheel drive. The new Sequoia will also feature a Torsen limited slip center differential along with a two speed transfer case which is what is offered in the standard models as well.

The option to change up the sound

If you’re into the whole sound aesthetic you’ll have the options of going with a cat back exhaust which enhances the sound and makes it more distinct and set apart from the crowd. This is one of those small options that can mean so much when it comes to personalizing your ride. 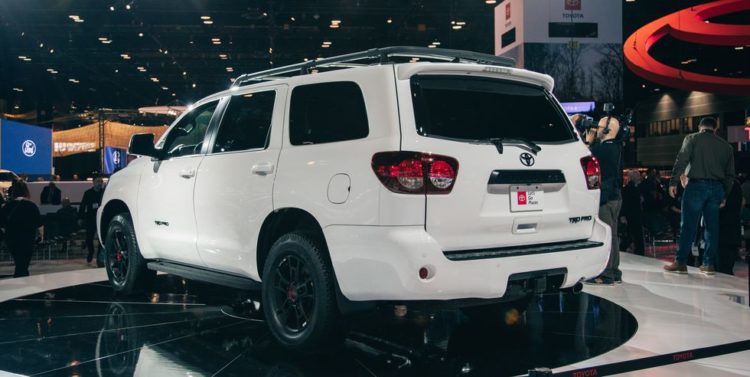 The interior of the 2020 Seqoia TRD Pro

The seating layout accommodates up to seven passengers and features a row of captains chairs in the middle along with a three place third row bench. The headrests will feature really cool embroidered TRD Pro logos to add a note of distinction. The floor mats get the same treatment and the red stitching for teh seats adds a really classy contrast.

Some really great features will come with the new Sequoia TRD Pro including push button start, keyless entry, tri zone automatic climate control, a sunroof, a touch screen with capability for Android Auto and Apple CarPlay and leather upholstery. This will be the first time that Apple CarPlay and Android Auto are options in the lineup of Toyota trucks.

The new 2020 Sequoia TRD Pro is expected to make its official appearance at dealerships sometime later in the year, although the precise date has not yet been confirmed. The base price will begin somewhere in the middle of the $60,000 price range with top of the line models offered at $68,930.

Toyota is at it again and they just keep getting better and better. The new 2020 Sequoia TRD Pro is their latest offering for those who need to have enough room for 7 with comfortable interior accommodations and plenty of leg and head room. It’s a tough model that will offer rugged good looks and off road capability which is nothing new for Toyota, but this edition is made a little tougher. It’s not a budget vehicle and it’s a little on the expensive side but like the old saying goes, you get what you pay for and when it comes to quality and performance, this has all of the earmarks of being a success.