This is an exciting era for all of the lines of designer shoes but especially for the footwear called Adidas Originals. They’re oh-so-popular with everybody from kids to celebs. In fact, numerous celebs have their very own shoe line with Adidas. I guess that makes them better shoes, just having a celebrity name attached to them. On the other hand, the company has always made some pretty high-quality shoes but never have they been more of a smash hit than they are lately.

The fact is that all the major sneaker-producing companies these days are coming out with celebrity shoes and everybody, especially kids and teens, are going crazy for them. So here’s a list of the whos-who of the celeb sneaker frenzy:

The Adidas Yeezy line, as well as the Nite Jogger, are very distinctive offering from the Adidas lifestyle division. But now, all eyes are on their newest design, the LX Con, which is truly eye-catching. The first time they were seen in public was on the feet of one of our fave actor/directors, Jonah Hill. He wore them to the Hypefest in 2018. It’s truly a style that is considered to be a little less UltraBoost and much for Y-3. The shoe offers a brand new silhouette, featuring lightweight mesh uppers and delicate stitching on the cloth stripes. In addition, this shoe offers something called a “technical lacing system” What is that? It has plastic tubes that run literally from heel to toe as well as around the throat of the shoe. Add to all of that an adiPRENE midsole that’s pretty chunky plus a piece that’s high-cut on the lateral-foxing, and you’ve got a truly new hybrid looking sneaker. 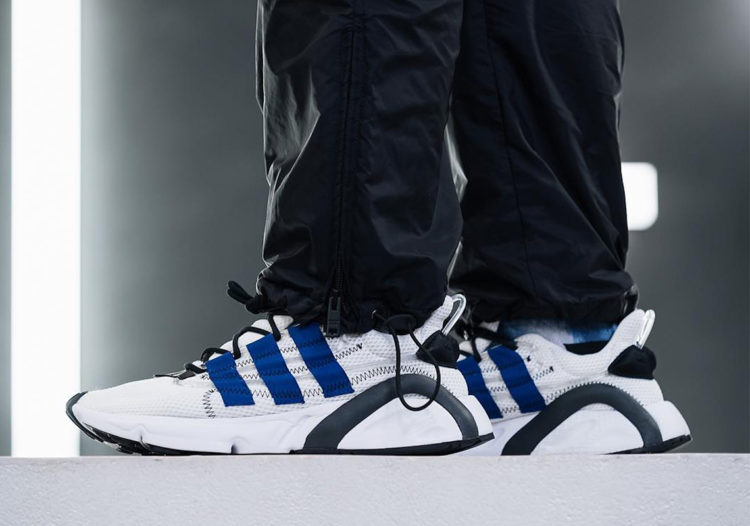 To date, the LX Con has only been seen in three cool color combos:

Many of us remember the good old days when fairly high-quality sneakers were cheap and easy to get your hands on. Well, gone are those days and here instead are the days of “status sneakers”. When they first burst onto the landscape, shoes like Air Jordans weren’t just shoes anymore. They were status symbols. Sadly, teens and even younger kids were beating each other up and, yes, even killing each other to get them. That’s died down a bit by now but young people everywhere still crave the latest status sneaker to put on their young feet. Good for the shoe manufacturers, like Adidas, Nike, etc., but not so good for the parents. That’s because gone are the good old days of $20 shoes for your kids as well. Prices are out-of-control and kids are bleeding their parents’ pocketbooks to get the very latest pair of celeb or trending shoes. So, what happens to parents who just bought their kid a $200 pair of designer sneakers when they come home a few days later after finding out that a newer shoe is trending and they just can’t live without them? I guess they just dig a little deeper and buy, buy, buy.

Yes, folks, that’s what keeps the designer sneaker biz going strong. For every pair of $200 shoes they sell, there are thousands of kids (and adults, too) lining up for the next pair. And, the one thing that keeps those designer shoemakers hopping is the massive amount of competition that they have to contend with. For every successful shoe line, there’s another just as innovative waiting in the wings. The Adidas LX Con just might be that new shooting star of the shoe market for this year or at least for the first half of it. Will they soar as high as Air Jordan or even Yeezy? Well, only time will tell if being “Jonah Hill-approved” will propel it to the top.