Home
Watches
A Closer Look at The Breitling Navitimer Super 8 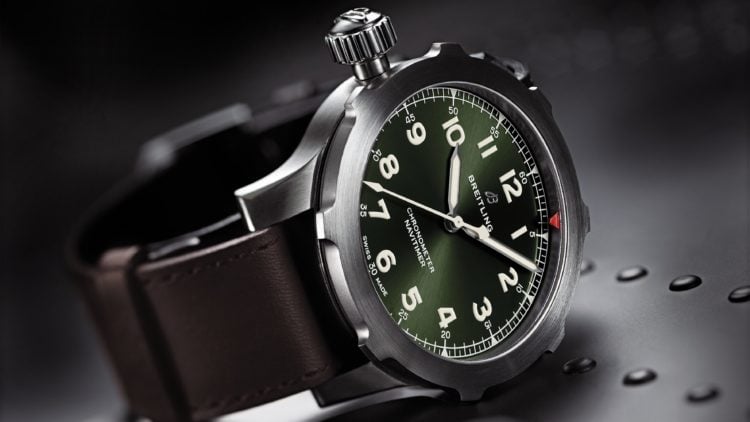 When it comes to watches and other sentimental objects, consistency of their design plays a big role on how we view and value them. That because we consider the first memories we have of such objects to be precious and worth cherishing. That’s why any change in their design makes us feel as if we are being robbed or cheated into taking something that we don’t care about. That was what happened when Breitling released the Navitimer 8 collection earlier this year.

Their streamlined, elegant and vintage -influenced design was a clear sign Breitling was heading to a new direction. However, it didn’t amuse the Breitling purists who saw it as an attempt to by Breitling to change from the bigger, hyper-masculine aviation watches, from which it got its present notoriety. Even after the Breitling CEO tried to assure them that was not the case, the general feeling was among fans was that the original design was perfect as it was.

That is why the release of the new Navitimer Super 8 during this week’s Baselworld 2018 is good news for them, and it should clear all doubt from their mind and possibly make their hearts joyful. One of the first things that will strike you about the watch is its green military dial with in a titanium case.

The watch is inspired by the Breitling’s Reference 637 stopwatch worn by World War II bomber pilots. They would strap the stopwatch on their thighs during missions, which ensured that they would be able to read it with ease. Moreover, it had a huge left-hand crown that allowed the bomber pilots to operate it even when wearing gloves.

The huge crown meant that even though the timepiece was strapped to onto their thighs, they could operate the crown from the “top” of the case. Another notable feature was the pusher which they used to activate the countdown and count-up functions in order to accurately execute their wartime missions. Moreover, just like the watches that inspired the design of the Navitimer 8 models, the Reference 637 is a product of Huit Aviation, a department of Breitling brand. Willy Breitling founded Huit Aviation in 1983 and he is credited for laying the foundation for the Brand’s achievement. He worked hard in the earlier years to make sure that Breitling’s timepieces were reliable and tough for use in military and civil applications.

The Breitling Navitimer Super 8 still bears the historical blueprint; it has a 46-mm case with a large rotating unidirectional bezel, which brings the watch’s total diameter to 50 mm, and can be either titanium or stainless steel. To make the Reference 637 water-resistant for a depth of up to 30 meters, Breitling used a solid, screwed caseback, and screw-locked crown located on the left flank of the case.

While the titanium model has a military green dial, a black dial is used on the stainless steel model. However, both watches make use of large and luminescent Arabic numerals, as well as luminescent minute hand and hour hand. Other notable features are a prominent red triangle pointer located on the rotating bezel’s inner flange, and it can be used along with the hands to monitor elapsed time.

Inside the Breitling Navitimer Super 8’s 14.4 mm thick casing, you will find Breitling’s Caliber B20, which is a chronometer-certified movement that’s based on the Caliber MT 5612. Fans of the Tudor will recall that it’s the same movement that was used in 2017’s Tudor Black Bay Chronograph. The B20’s power reserve lasts for 70 hours, its wound using a dual-acting ball bearing rotor, and makes 28,800 a/h. Both the Titanium and Stainless Steel models are worn on the wrist using brown NATO straps.

The crown is positioned at 9 o’clock to make it comfortable to wear on the left wrist. However, due to its sheer size, it definitely wasn’t meant to be a discreet dress timepiece. However, that is intentional because it’s an authentic pilot watch whose main purpose was to be a timepiece that’s readability under harsh conditions.

While the Breitling Navitimer Super 8 isn’t designed to be worn on the thighs, it still brings back lots of wartime memories of its predecessors. As at the time of press, the price tags of the Stainless Steel, and Titanium Navitimer Super 8 models hadn’t been released.

20 Things You Didn’t Know About Pieter Van Der Does

The 20 Best Places to Live in New Zealand

The 20 Best Things to Do in Tennessee for First Timers