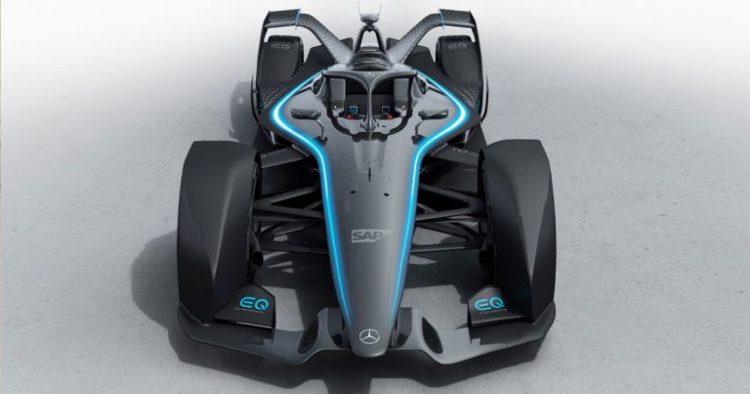 Mercedes-Benz is known for its production of comfortable riding luxury cars and they’re one of the bigger names in the industry. They’re recently made history by designing end engineering what we believe is their most clever innovation to date. We’ve just taken a closer look at their new Formula E all electric race car which puts them in a new class of auto making on two different fronts. We’re actually impressed with the new little beast that is fully equipped and quite capable of tearing up the race track.

A surprise at Geneva

The revelation made by Mercedes-Benz came at the 2019 Geneva Motor Show. They proudly paraded their new creation which is impressively small yet capable. For an all electric car we were impressed with its unbelievable acceleration that allows it to achieve a lightning like speed running from zero to 60 miles per hour in an unbelievable 2.7 seconds. You don’t dare blink when the tiny racer goes by or you’ll certainly miss the show but you’ll hear it coming and feel the movement of air as it whizzes past. They’re calling it their Silver Arrow and the name certainly does it justice as it slices through the elements at a decent clip.

Conservation without being conservative

Who says you need a fuel powered engine to be fast? Mercedes-Benz has just proven that you can build a high performing Formula E racecar and present it in an electric format. It’s kinder and gentler for the planet but it doesn’t put the racing team at a disadvantage for power or speed. The new Silver Arrow was introduced to the world at the 2019 Geneva Motor Show to be a teaser of things to come.

What’s the difference between Formula E and Formula 1 Racing?

There is a distinction between Formula E and Formula 1 race cars. A group of Formula E contenders include special vehicles that have been manufactured by Jaguar, Nissan, Nio, BMW, Audi and now Mercedes-Benz. We recently heard rumors that Germany’s Porsche is considering joining into the fray with their own unique creation. The new Mercedes-Benz Silver Arrow All Electric has a total curb weight of almost 2,000 pounds. It’s powered with a 52kWh battery back that will achieve a top speed of 174 mph.

Formula 1 regulations specify that the qualified race cars must weigh at least 1,636 pounds with engines that are near 1000 horsepower. The major difference with Formula E races is that each automaker is allowed to develop their own drive trains, meaning each brand can determine their own battery pack.

Are we making history yet?

Formula E racing is attracting a following of those who prefer a more conversationalist approach to auto racing. EV automakers can all get in on the action and it gives them the opportunity to showcase their new electric cars as well as to show off their drive trains to the world. As we’re approaching the start of the Formula E season it will be interesting to see who shows up to compete. The 2019-2020 season is set to swing into session with its kickoff starter race at the Ad Diriyah Street Circuit in Saudi Arabia in December. If you’re not familiar with this division of the sport, it’s just entered its sixth year so it’s been going for a while now.

Formula E racing is gaining more popularity throughout the world. Mercedes has thrown its hat in the ring with their new 2019 Silver Arrow, all electric race car. It’s a beautiful vehicle that features a fast acceleration time and it’s equipped like a little beast. We anticipate that it will give the competition a real run for their money in the upcoming Formula E series racing season. It will be exciting to follow the all electric car to see how it stacks up against the crowd. Even more importantly, it shows us how Mercedes-Benz is forward looking in their technology and their innovations that are making a supreme effort to aid in bringing the world into a new age where fossil fuels are no longer depended on for necessity or for recreation.