Home
Sneakers
A Closer Look at the LeBron 16 “SB Blue” 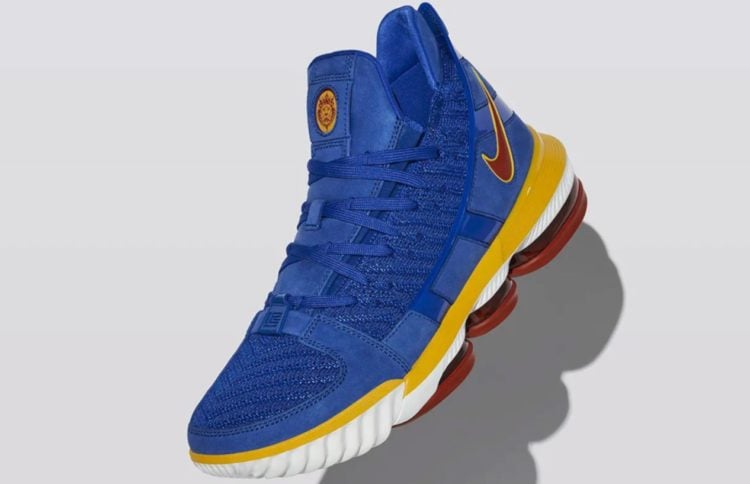 Nike just keeps rolling out the new sneaker lines for 2019 and they’ve made the official announcement that the new LeBron 16 is available in their “SB Blue” colorway. This is perhaps one of the most vibrant blue sneakers we’ve seen in some time and it is packed with so many features and attributes that the shoe is well deserving of a closer look.

When Nike partnered with LeBron James it was an epic event in the history of sneaker design. James is well known for his maneuvers on the court which have been nothing short of amazing and even bordering superhuman. He’s one of the most talented athletes to hit the courts and his expertise in facilitating new designs for high performance along with impeccable taste in styling has been a great benefit for fans of the Nike brand of sneakers. His endorsement alone is enough to let the world know that his inspirations are going to be high performers on the court. Who better to consult that an expert?

We start with the construction of the new LeBron 16 SB Blue. It’s a shoe that is designed to fit snugly against the foot with the lacing system designed to give the wearer complete control over the snugness of the fit to ensure optimal performance and comfort. LeBron wore the predecessor for this model in a match against the Boston Celtics. The 2019 edition features all of the support, cushioned comfort and springy performance features of the previous shoe from which it takes its inspiration, with a brand new look.

The LeBron 16 SB Blue is a striking shoe with a unique color scheme featuring a bright and vibrant blue upper that is made of a combination of fly knit material with generous overlays of patent leather and suede that gives it visual appeal. It looks similar to the Zoom LeBron 3 with the addition of Red and yellow colors in sparing amounts that gives the shoe a nice contrast. The accents are bold but not overdone.

The 2019 Nike LeBron 16 SB Blue sneakers are offered at a manufacturer’s suggested retail price of $200 per pair. They were released for sale to the public on March 9, 2019. They haven’t been out for long and we’ve already heard that the highly anticipated new release has already sold out n many locations. This overwhelming response to the release took place within just a few short days’ time. You might be able to find a few pairs available through online vendors and auction sites if you’re luck but be prepared to pay prices that are above the suggested retail price. As with many of Nike’s very special models, the demand for this particular shoe has been much higher than the supply. There are some vendors who buy up as many as they can in advance because they know that these highly desired sneakers will only increase in value as the supply becomes more scarce.

If you missed out on the first release, you may need to wait if you want to get your pair of the LeBron 16 SB Blue’s at the regular retail price. Most of them are already sold out for the initial wave so now we’re waiting for news from Nike about a possible restocking of the model but that won’t come until later in the season if it does at all. The greatest issue won’t be with finding them online, it will be in finding the right size and on top of that, finding a pair for a reasonable price. Popular sites such as eBay.com will offer a few and there are also other auctions and online vendors who are bound to have a few pair in reserve. You can’t really blame them for being savvy entrepreneurs but it’s not likely that you’ll find the LeBron 16 SB Blue sneakers for under $200. Plan on them going for between $250 and whatever bidders are willing to pay for them. We wish you luck and advise you to stay tuned for more news on a re-release later this season.