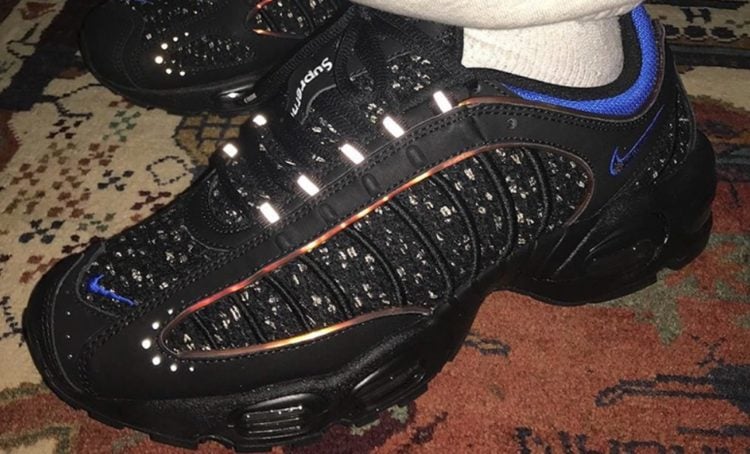 It’s that time of year again and Nike is hard at work in their creativity department designing some of the sweetest new sneakers that we’ve ever seen throughout their history. If you’re a fan of the Nike Air Max model then you’re going to be in for a real treat. Nike has recently announced the impending release of their new Supreme x Nike Air Max Tailwind 4.

A sneak peek at the new sneaker reveals that it’s a re-issue of a silhouette in the form of a running shoe that became popular about two decades ago. It’s a retro salute to a 1999 model that made the grade to top pick with enthusiasts back then and it’s time for a reprisal. This will be the first time that this style has been showcased since the 1990s era and the predictions call for it to be a big hit. After taking a look at the preview of the shoe we must say that we heartily agree with that outlook. It may jog the memory of some enthusiasts who still remember the styling but for many it’s going to be a brand new style that may well bring back a popular trend to a whole new audience.

he new Supreme x Nike Air Max Tailwind 4 is a collaboration between Nike and Supreme Paris. It will present with a unique and somewhat mysterious blue colorway with black and orange with a material that is more reminiscent of tweed for the upper with an attractive and decorative bronze finished piping. The brand logo is smartly stitched in an italicized design with strategic placement on the lace stay portion of the tongue. The Nike swoosh has been miniaturized and placed subtly on the side heel portion of the upper just below the ankle with a second, both in a vibrant blue coloring at the toe near the area where the lacing begins. It’s a bit understated but the color contrast stands out against the dark tweed uppers presenting a magnificent contrasting effect when combined with the

Upon first glance we were tempted to refer to certain elements of the shoe’s accents as bling but this wouldn’t really do it real justice. It borders this aesthetic but is a little more subtle than that. You can take a look and draw your own observations about that but it is certainly one of the most unique and attractive iterations that Nike has produced in some time.

Nike has not seen fit to nail down any particular time for the official release date of the Supreme x Nike Air Max Tailwind 4 yet, but they have offered an approximation that could give us a sense of when to expect it in local retailers. Because of the timing of their announcement, we’re all assuming that the release date will be sometime in the late spring of early summer of 2019. Also keep in mind that Nike will also be re-issuing the GG colorways in their upcoming offerings of the Air Max Tailwind 4 in addition.

The Supreme x Nike Air Max Tailwind 4 is likely to be priced at about $160 per pair, from what we have gathered but opinion is just speculative. The part of the pricing that we are fairly sure of is the fact that this is going to be a popular model and we’re predicting that sales will soar and it may be difficult with the manufacturer to keep up with the demand. We’re certain that there will be vendors who also anticipate this as being the situation and they’re likely to scoop up all of the pairs that they can get their hands on to re-sell them when sup-plies get low. What this means is that if you want to get your pair at the regular retail price, it’s going to pay to be among the first in line when they’re first made available instead of paying auction prices later.