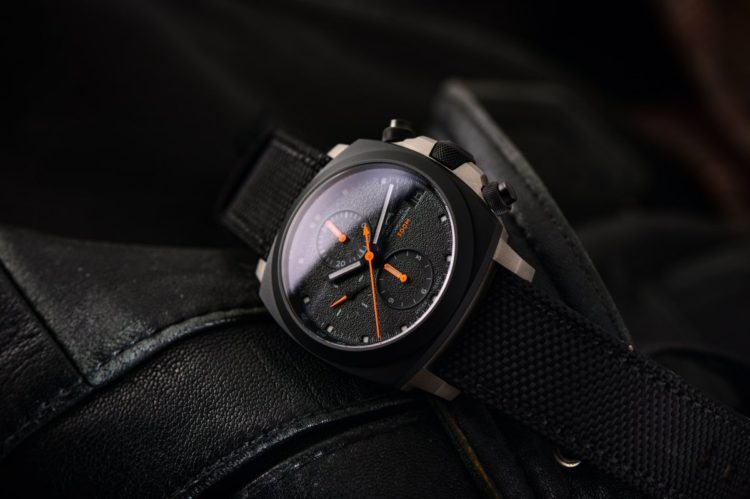 Andersmann is a Swiss luxury watchmaker that has recently announced the debut of its latest new timepiece. The Andersmann Chronograph DLC is the most recent model from a young company that has been making waves in the watch industry. The company hails from Hong Kong, founded by Raymond Chan. Although the company is headquartered in Asia, the watches produced are fully made and assembled in the country of Switzerland, so you can depend on Swiss quality. The brand has just announced the new diver that has piqued the interest of water enthusiasts who have found the new brand to be worthy of their patronage.

A closer look at the Andersmann Chronograph DLC

A Blog to Watch reveals the details of Andersmann’s latest offering. The Chronograph DLC is a magnificently complicated timepiece that provides a wealth of nifty functions with modern yet simple styling. This is an eyecatching example that appears different at first glance. The aesthetics draw the eyes in for a closer look and inspection of its finer points. Andersmann has taken every pain to ensure that the details of the Chronograph DLC capture the attention of casual observers, but some facts are not visually evident that lend to their inherent value.

Specifications of the Andersmann Chronograph DLC

The Chronograph DLC first and foremost is made with the comfort of the wearer in mind. The case is constructed of lightweight titanium that makes it feel light on the wrist for all-day comfort. The case is notably different with a multi-piece design. The outer portion of the case that joins the lugs and the bezel is square with contrasting colors and materials. It measures 44 mm in width, crafted of Grade 2 titanium in multiple layers. The watch has a chunky profile with a thickness of 16.5 mm, most suitable for larger wrist sizes, but if you like a large watch, the weight is minimal. The case back is an exhibition style, protected with a flat sapphire crystal lens that is resistant to scratching and allows a clear view of the inner workings of the movement beneath. Uniquely, the 1.7 mm sapphire crystal in the back is tinted grey, yet still extremely see-through. At the front, the face of the watch is topped with a double curved sapphire crystal with a thickness of 3.8 mm, and coated with anti-reflective treatment. The middle portion of the case is made of DLC titanium with the majority of the case finished with bead blasting.

The dial offers a fair degree of legibility with a background that is a black-grained texture with blue luminous hour markers. The use of grey and white outlines makes it easy to see the time at first glance because of the wondrous contrast between light and dark features. The minute counter is set at the noon position with an hours indicator at 6 o’clock and the seconds counter at 9 o’clock.

The Andersmann Chronograph DLC is powered with a Swiss-made caliber ETA A07.211 automatic movement featuring an ETACHRON regulator for impeccable accuracy and reliability. It’s a rare movement called the Valgranges caliber A07.211 to be more specific. According to the official Andersmann website, it features an engraved logo on the rotor which is lovely to view through the clear exhibition case back. The functions of the movement include hours, minutes, seconds, and a date. The power reserve is 46 hours.

The strap for the Andersmann Chronograph DLC is made of FKM rubber. It securely affixes to the wrist with a tongue buckle with an engraved logo. The buckle is also made of grade 2 titanium material.

Other features of the Andersmann Chronograph DLC

This is perhaps one of the most outstanding new models released for 2021. The timepiece has water resistance to 30 bar which is approximately 300 meters, making it a true diver. All components of the watch are assembled in Switzerland. The new Chronograph DLC collection offers Andersmann enthusiasts a new and modern twist with a super lightweight chronograph diver that weighs just 135 grams for ultra-light comfort on the wrist. The Andersmann Chronograph DLC is currently available from the official website for a price of just $1,680. It’s worth noting that this is a strictly limited edition timepiece. There will only be 80 pieces ever made for distribution throughout the world. Once they’re sold out, the model is likely to be hard to get your hands on. It is listed as reference ANN0688.

Andersmann is a young brand that hasn’t been around for as long as some of the larger more well-known upscale brands that have their roots going back for a few hundred years, but it’s risen to the status of a competitor in today’s watch market. The brand has established itself within just a few short years as a quality and dependable Swiss watchmaker. Although the company originates in Hong Kong, all of the timepieces produced by the brand are made and assembled in Switzerland. Uniquely, the movement used in the Chronograph DLC limited edition collection is one of the most accurate and reliable powerhouses that are fairly rare. This feature adds to the overall value of each example. Great attention to detail has gone into the design and craftsmanship of each Chronograph DLC from the engraved logos to the distinct design features that make it stand out when compared to other diver watches. We fully expect the value of these watches to continue to increase as time passes. Each is rare from the moment it is produced because of the limited number of examples that are going to be made. This increases its desirability with collectors as well as those who like ownership of a watch that isn’t commonly seen on the wrists of others. It’s one of the more affordable options if you’re looking for a luxury divers’ watch.