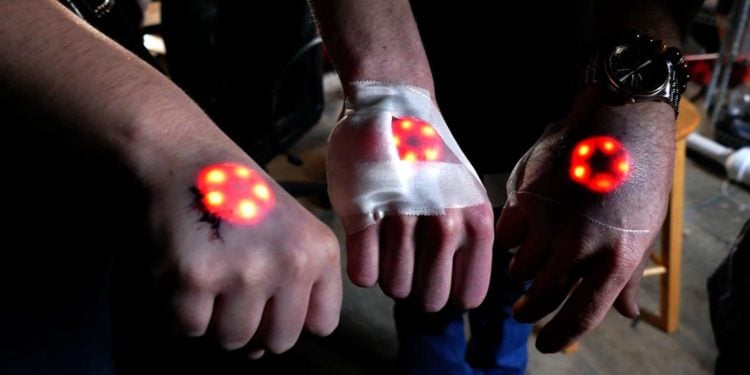 Most of us have watched films and television shows that feature futuristic high-tech warriors that have enhanced abilities for warfare. While this might be little more than a fantasy muse in the minds of viewers, it’s something that really isn’t that far off. The United States military has been working on plans to create an army of these cyborg warriors by developing their strength, wiring their brains into computers and enhancing their natural senses. While this may sound like a positive for our national defense, “augmented human beings” could pose a serious problem.

What we know so far.

A recent report has outlined the military’s plans for creating augmented human beings to make them battle-ready by the year 2050. According to Army Times reports, this information has recently been declassified and is being made public. From what we can gather, there are plans to create a fusion of human and machine that will create a new class of cyborg warriors. This is a thirty-year plan that includes creating enhancements to the hearing and eyesight of soldiers as well as making them physically stronger and equipping them with an array of wearable technology that will give them an improved performance that goes far beyond what humans are currently capable of.

Another form of technology that the military is developing is in the area of neural enhancement to make the human brain a conduit for a transfer of data from the brain to another source and back two the brain. The very brains of soldiers would be connected to computers for a two way data transfer.

It is an established fact that scientists are now capable of conducting gene editing procedures in the development of a human fetus. Although the ethics of this practice still come strongly under question, it’s a technology that is being developed. Modern science can not only create specific sex of a child, but they can also alter the genetic design to make the person more resistant to disease, physically stronger, and to bear certain physical characteristics. These are the things that the public is aware of and it’s likely that there are far more genetic experiments that are not yet being discussed in an open format.

With augmented humans, there is going to be the risk of an increase in social dichotomy and separation of the classes. There will be the haves and the have nots. The embedding of technology into the human body will give some an unfair advantage and it can have tremendous social implications for the current class structure. Could this be something that will threaten the very tenets of democracy? This is one of the potential consequences. There are many pros and cons when we consider the topic that bears discussion prior to the advent of the creation of augmented human beings.

What are the implications for augmenting humans?

First, we must look at the potential benefits of augmented humans. On the battlefield, there is little doubt that having special abilities would give any military force a definitive advantage over their adversaries. Technology is advancing at such a rapid pace that medical science is now extending life through the transplant of organs and other procedures that were once considered to be futuristic. These improved beings will likely become more productive in all segments of society and there are some wonderful and positive implications, but there is another side to the situation that we must also consider.

Enhanced senses that give a person super hearing and visual capacity, not to mention the ability to share information back and forth with a computer would create a human that would take on new dimensions. It’s unclear how this type of augmentation would affect the physiology of the persons undergoing the enhancement. Another concern is how will this impact society as a whole? Once this type of technology is perfected, what is going to prevent it from falling into the wrong hands? Will the enhanced people function with a moral compass within society or will some of them use their abilities to gain an advantage over the citizenry? Will they even be able to function normally in society? With human nature being what it is it is likely to at least be a great temptation to use these special functions for personal gain, at the expense of others who are more vulnerable. While we may gain an advantage on the battlefield for a period of time, it’s a sure thing that spy activity will increase and when other countries gain this technology there is a potential for another tech war that will rival that of the space race.

Does the potential for good outweigh the risks?

Augmented reality can cause problems in perception and judgment. As humans, we are accustomed to seeing, hearing and feeling things at a certain level. When these senses are changed, we will be required to adapt to them and this may be something that creates an entirely new set of problems. Augmented reality has been known to mimic some common vision problems and to interfere with the eyes’ ability to properly focus. This leads us to yet another question that remains to be answered. Do the potential benefits outweigh all of the risks?

There are a lot of things to consider when augmenting the senses and abilities of human beings. The kind of embedded technology that is being investigated brings the potential for creating some advantages and some very good things. In the same token, it can bring about a host of problems. We may be asking for a lot more trouble than we will be able to handle. We’re still three decades away from the military’s plans becoming a reality, according to the most recent reports, but we’re fairly sure that at least some experiments are already being conducted on live humans. This could signal a new chapter in human development and forever change the world that we all live in.