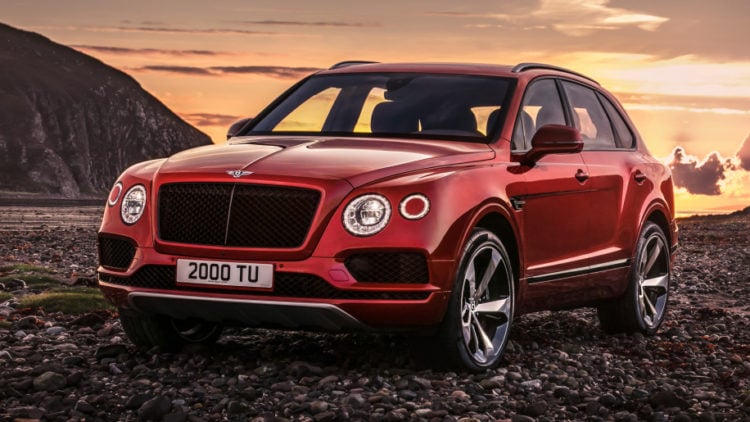 Bentley is a name commonly associated with top-of-the-line British automobiles, bringing to mind images of luxury, speed, and class. They have been in business since 1919 – so almost 100 years – and continue to produce some of the best vehicles to grace 21st-century roads. Back in 2016, Bentley introduced a new line of SUVs, known as the Bentayga range. These were quite well-received, and mark the British manufacturer’s success in the new market. The vehicles offered two engine options: A diesel V8 and a gasoline W12. Bentley is now expanding the line to include a gasoline V8-powered SUV. Though it will retain most of the stylings already popularized by the Bentayga, the new SUV will offer a great V8 choice for those looking to buy a gasoline-powered car.

The new Bentley Bentayga V8 will feature a 4.0-liter twin-turbo engine. It will produce incredible power – up to 542 horsepower and 569 foot-pounds of torque. Plus, the vehicle will fly. Currently, it boasts a 4.5 second 0-60 time and a top speed of 180 miles per hour. This motor is likely based on a similar motor from Porsche – after all, the VW Group owns both brands. The Porsche Cayenne Turbo also uses a V8 motor that has similar stats to the new Bentley offering. However, the Bentley motor has been beefed up for application to the heavier Bentayga, and will offer a higher top speed (but a lower rate of acceleration).

Another important factor of the new V8 is that it offers greatly-improved fuel efficiency. Compared to the other two motor options, it will make much better gas mileage (just about 25 miles per gallon). This is likely due to another new technology implemented in this motor. The Bentayga V8 will be able to turn off four of the eight cylinders when they are not needed. Plus, it will be able to turn them back on instantly, offering perfect pedal response when you need to cut it loose. Emissions from the new V8 have been cut down, meaning that this engine is also more environmentally-friendly than other offerings. Overall, the mix of power, efficiency, and cleanliness from the gasoline-powered V8 mark it as a valuable new option for the Bentayga SUV.

Though the new motor configuration will be placed into a Bentayga that is mostly-unchanged from previous years, there are a few notable cosmetic differences that the gasoline-powered V8 equipped SUV will display. First off, the brake calipers in the front will be painted red – a nod at the new engine. Speaking of brakes, they can also be upgraded from the standard option. If upgraded, the Bentayga will be equipped with carbon-ceramic brakes that take the title of the world’s largest front brakes on a production car.

These massive brakes will feature 17.3-inch discs on the front, with 14.6-inch discs on the back. Altogether, the four braking set-ups will create 4425 foot-pounds of stopping force (more than enough to stop the car from nearly any speed). Some cosmetic changes that will be made on this model include a new 22-inch wheel design, as well as new styles for both the grille and tail-pipes. Interior cosmetics have also gotten an update, with new options including carbon trim for the doors, center console, and dashboard. There is also a new color of leather called “cricket ball” that will be available from the new model of Bentayga.

The Bentley Bentayga gasoline V8 will come in at a Bentley-level price. The SUV is set to be sold at $189,000, and will be available at the end of March. It is a great price for the performance that it offers, especially when you consider the speed, fuel efficiency, and lowered emissions. If you are looking to purchase a luxury SUV, the Bentley Bentayga is a great choice. However, you should keep in mind that they will be releasing another version of the Bentayga sometime in 2018. The next version will be a hybrid, featuring a 410 horsepower 3.0-liter gasoline V6 hybrid powertrain. The fuel efficiency numbers will be way better, and emissions will be lower. Of course, you will sacrifice a lot of power if you choose this car. But with rising gasoline prices, and the general trend towards the creation of hybrid vehicles, it might be a better investment in the future.

Bentley’s Bentayga line of SUVs offers considerable performance and unmatched luxury. Anyone who wants to drive a luxury SUV would do well to look to the British manufacturer for a prime vehicle. Though the price is steep, it is about on-par with other top-end vehicles. Overall, the engine, design, and performance all meet the standards we have come to expect from this top manufacturer.