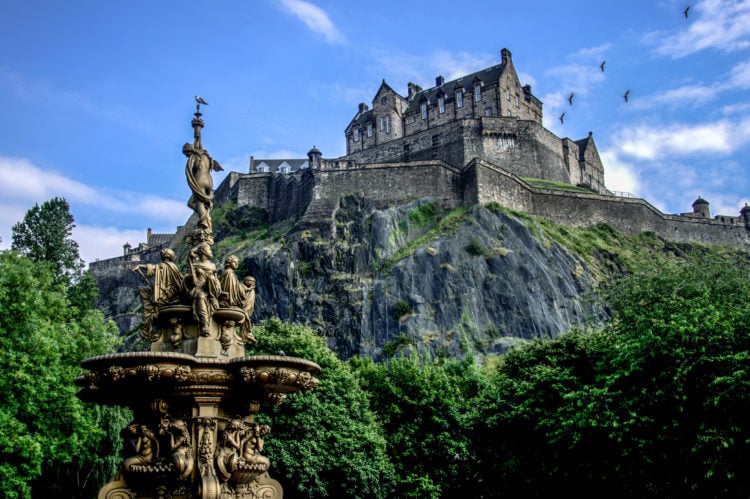 Are you planning to make a visit to the city of Edinburgh, Scotland in the future? If so, and this is your first time then there are some amazing things to see and do that you’re probably not aware of. There are some must-see attractions for everyone, but Edinburgh is filled with hidden treasures that will make your trip memorable for years to come. We have some advice about places to see and things to do that you might want to investigate further before locking down your itinerary. Here are the 20 best things to do in Edinburgh for first-timers.

Caton Hill is the famed favorite viewpoint of writer Robert Louis Stevenson. Fans are drawn to the site from all over the world. It has been designated as a UNESCO World Heritage site because it was one of the author’s favorite places to be. You’ll understand why when you take in the panoramic view that it offers of Edinburgh. You can see many of the city’s attractions from the viewpoint and it’s a great place to start your sight-seeing adventures. It’s not far from the Waverly Train Station so whether you book a tour or decide to go on your own, it won’t be difficult to find. Arthur’s Seat is another popular tourist attraction that is situated within Edinburgh’s Holyrood Park. This is the venue’s highest point that towers 800 feet above sea level and it also offers some spectacular views of the city and surrounding area. We recommend this for anyone who loves panoramic views of the local attractions as well as a breathtaking view of the sea. This is a tour that is recommended for the able-bodied who don’t mind a good uphill hike because it takes a bit to reach the top. There are tons of walking trails at the site that at one time was a volcano. 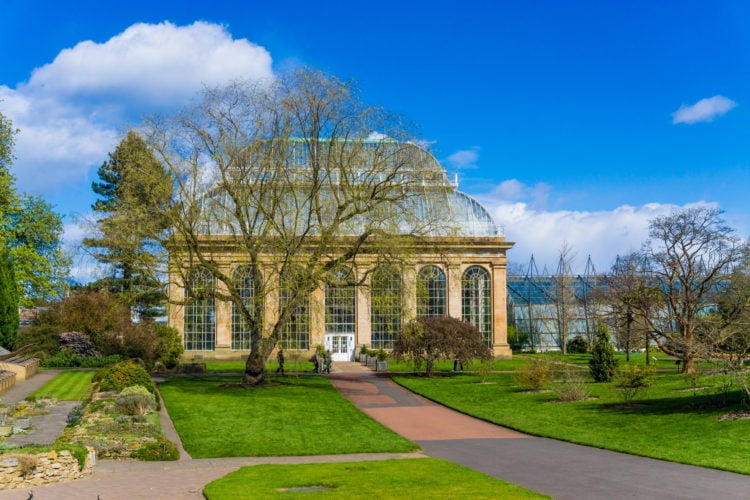 The Royal Botanic Garden is the ideal place for tourists to spend an hour or so taking a break from a busy tour itinerary. It’s a peaceful spot to take a load off and admire the 70 acres of botanic delights. There are over 3,000 exotic plants in addition to several garden houses, each with their own climatic zones. Some of the most beautiful flowers in the world can be found at the Royal Botanic Garden. On the outside, there are some amazing giant redwood trees growing in the Woodland Garden that is just adjacent. 17. Tour the National Museum of Scotland

The National Museum of Scotland is filled with more than twenty thousand historical artifacts. This is a massive museum filled with interesting exhibits that include archaeological finds including the skeleton of a T. Rex, a sheep display, the first cloned mammal, and much more. This is a tour that you should plan on spending half of a day at if you want to see everything. The admission is absolutely free. 16. Visit the Palace of Holyrood House

The Palace of Holyroodhouse is the residence of the Scottish Queen and it is a significant landmark with great historic significance. It served as residence to a variety of notable Scottish royals throughout history. It was the home of Mary, Queen of Scots, Charles I, King George V, and others. We recommend scheduling a tour to learn interesting facts about the historical usages for each of the many rooms and galleries in the palace. There are some amazing portraits in the residence of the kings of Scotland. 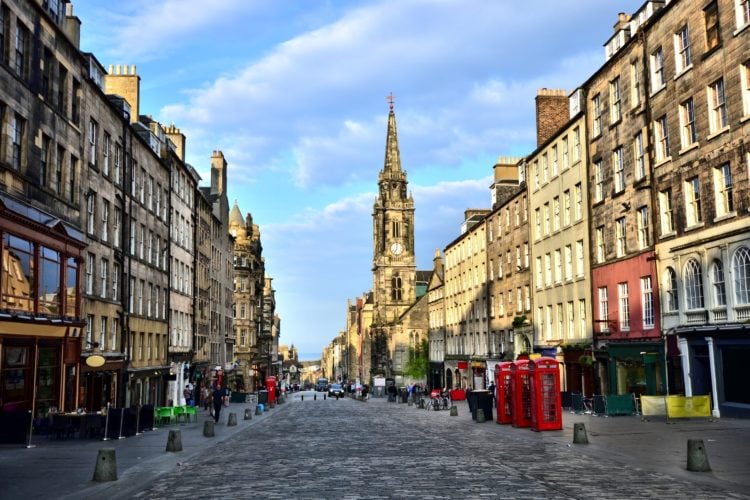 This is a free activity that many tourists find interesting. You can go on a self-tour or go with a guided excursion that starts at Edinburgh Castle and concludes at the Holyroodhouse Palace. This is the main thoroughfare of Edinburgh and the mile is loaded with several big attractions. It’s a great way to find new things to do and places to see. There are also some great places to eat along with way. This is the vessel that Prince Charles and Princess Diana spent their honeymoon aboard. The Duke and Duchess of York also spent time aboard the ship. It has been a favorite of the royals for decades. Visitors are welcome to tour the boat with a full tour along with tea in the Royal Deck Tea Room and more. It’s a part of the recent history of Scotland. This is one of the most highly recommended tours for newcomers to Edinburgh. It takes between one to 2 hours to disover the secrets of the whiskey distilling. There are a variety of different tours to choose from. Some of them offer a barrel ride that takes you through the process of scotch whiskey production as well as an overview of the aromas, and you’ll get to see thousands of scotch whiskeys that are housed in the largest collection in the world. There is also a taste component included if you’re fond of fine scotch whiskey. This is a tour that is highly recommended for families that are visiting Scotland with children. Camera Obscura is situated at the top of the Royal Mile and it features a collection of optical illusions, games, and colorful puzzles that will thrill both old and young alike. This attraction was first opened in the year 1835. There are so many different weird and magical experiences that it is one of the most highly recommended visits, even if you don’t have the kids along. 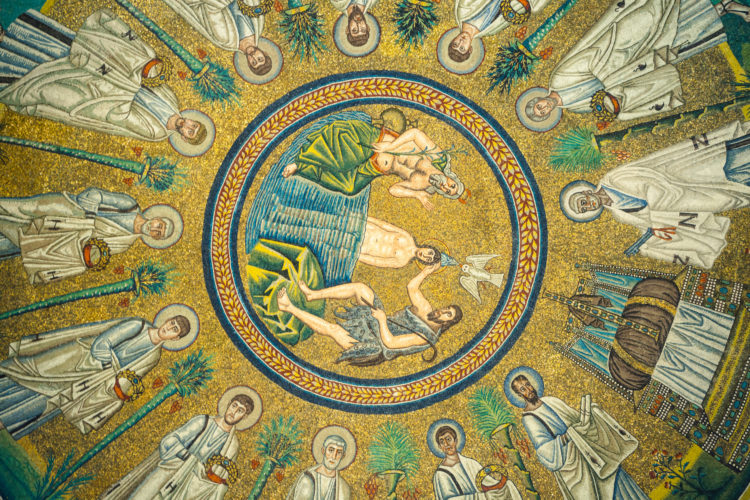 Mary King’s Close is located in a hidden part of the city of Edinburgh and it’s beneath the modern city streets. It’s not something that you would ordinarily see unless you knew that it existed. Tours of this hidden part of the city are offered. This is the former medieval street and it is reputed to have been the busiest of that time. The area is named after Mary King, a woman who conducted business in the 1630’s era. If you’re a fan of history then this is a tour that you will definitely want to book in advance. St. Giles Cathedral is not far from Mary King’s Close. This is one of the most beautiful structures in the city. We highly recommend visiting this church. Although the exterior is amazing, there is a lot to see on the inside. This church was established in the fourteenth century, also previously referred to as the High Kirk of Edinburgh. Thistle Chapel is one of the newer additions to the church that was built in 1911. It’s a good idea to give a donation when you visit but there is no admission charged. The Scott Monument is located on Princes Street in Edinburgh. This monument was placed in honor of the great writers of Scotland and it is the largest of its kind in the world. It’s a spectacular sight with many figures carved into the monument from Scott’s novels. There are also other figures of famous Scottish poets, writers, and other distinguished historical figures. While you’re there be sure to visit the Princes Street Gardens and the small museum room that is dedicated to the works and the life of writer Sir Walter Scott. 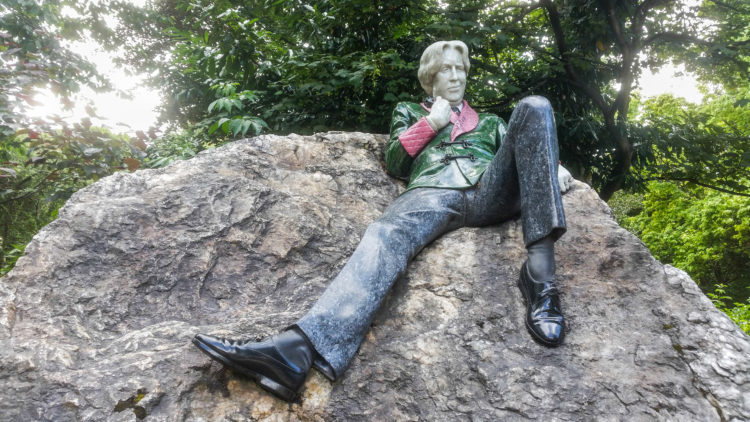 The Writers’ Museum is another popular attraction that we recommend. It’s not far from the Royal Mile. This is a place that you can go to learn more about a variety of important Scottish writers as well as Sir Walter Scott, who lived and died in Scotland. This is a must-see for anyone who loves Scottish writing and history. 7. Go to the Edinburgh Zoo

The Edinburgh Zoo is home to more than 1,000 animals. It’s a great excursion for families who are visiting the city for the first time. This is one of the most popular attractions for both locals and tourists as the zoo is the home to giant pandas, penguins, chimps, wallabies, lions, tigers, monkeys, and many more exotic creatures. The Scottish National Gallery is the ideal attraction for art lovers as well as historians. The gallery is free adn it is located near the Scott Monument. Here you’ll find a huge collection of art including paintings that go all the way back to the Renaissance period and extend to the beginning of the 20th century. The building that it is housed in is neoclassical in design dating back to the year 1859. If you’re an even bigger fan of modern art, then you might want to visit the Scottish National Gallery of Modern Art. This is a separate gallery that features paintings and other artworks that begin in the 18th century through the present. There is a good-sized collection of Impressionist and Italian paintings. You can spend more than a full day here so it’s a good idea to go when you have plenty of time on your hands. After walking around and viewing the art, you can relax and have a meal or a cup of coffee at the restaurant and coffee shop that are housed here. There is no charge for admission but donations are gladly accepted. This is yet another popular attraction for those who love art and/or history. The Scottish National Portrait Gallery was established in 1889 and it contains portraits of many significant figures from Scotland. Although not all of the artists are Scottish, the portraits are exquisite. Any fan of the works of J.K. Rowling will be thrilled to learn that the author wrote her book series in local cafes in Edinburgh. There are several sites that are dedicated to the “Harry Potter” theme and author in the city. One of them is Nicolson’s Cafe, where the first novel was rumored to have been written. Another is The Elephant House, and there is also a J.K. Rowling suite at Balmoral Hotel. There are tours that you can book to get the most out of the “Harry Potter” sites. The Edinburgh Dungeon offers historical walking tours that are 80 minutes in duration. The tour takes visitors through 2 short underground rides and a total of 11 shows that are led by actors. The Edinburgh Dungeon tour gives an overview along with some re-enactments of some of the grimmest historical events that have taken place in Scotland, including stories about witches, murder, cannibalism, plague, and more. It’s a scary tour and you’ll need to make reservations online. The most highly recommended place to visit is the Edinburgh Castle. This is the most popular attraction in Edinburgh. From the castle, you can get a great view of the city. This is one of the most historically significant sites as the former home of a variety of the country’s royals and other dignitaries. The Mons Meg medieval gun is on display. There is a fee for admission and you should purchase your ticket in advance.