Home
Travel
When Is The Best Time To Visit Seattle?
Prev Article Next Article 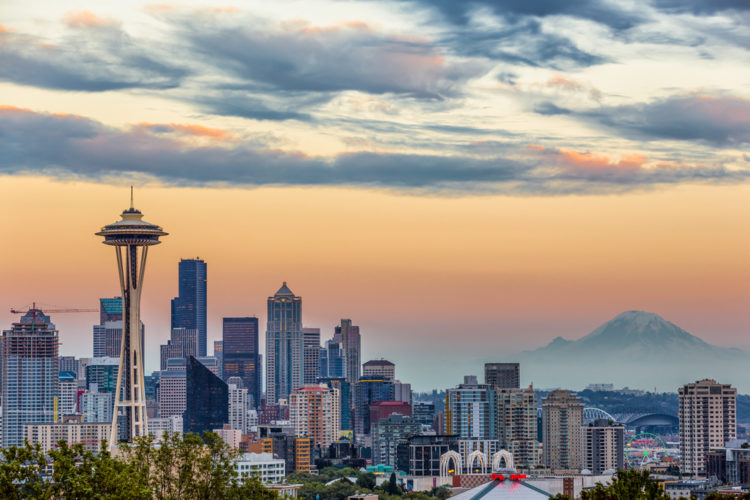 Even though Olympia is the capital of Washington, most people who visit the state prefer Seattle. After all, it has an abundance of fresh seafood from Puget Sound, not limited to the fish throwers at Pike Place Market. Tourists can also experience a rich history, including a tour of the early underground city in Pioneer Square. Throughout the city, you’ll find park oasis located throughout the urban metropolis like Greenlake Park. Close enough for a day trip is the Olympic Peninsula which offers a respite from the hustle and bustle of the city. Yet, there is one thing that detours people from visiting the town, all the rain. So, when is the best time to visit Seattle?

According to Trip Savvy, the driest months in Seattle are June, July, and August. However, don’t leave your rain gear at home because Seattle’s weather is unpredictable, and raindrops are likely to fall anytime. One of the most popular events during the summer is Bumbershoot, an American slang term for an umbrella. Summer is also an ideal time to visit because there are many more things to do when the weather is nice. During the sunnier months, Seattle is host to a variety of festivals and other outdoor events. Some like Chief Seattle Days celebrate the city’s history. Other’s like Washington Brewers Festival, Seattle International Beerfest, Seattle Street Food Festival, and Kirkland Uncorked are connoisseurs of spirits and fine food who want to sample Pacific Northwest offerings.

Most people know about the revolutionary music period, which took place in the 90s, the Seattle Grunge Era. So, if it gets rainy, there’s always The Museum of Pop Culture, formerly known as the Experience Music Project. According to Visit a City, Paul Allen, co-founder of Microsoft and owner, founded the museum in 2000. Famed architect Frank O. Gehry built it from 21000 stainless steel and aluminum shingles. The building is 140000 square feet with exhibits ranging from horror cinema, sci-cinema. The MoPop also offers the most extensive collection of items and handwritten song lyrics from famed Seattle musicians Jimi Hendrix and Kurt Cobain. The museum also has the Sky Church, a concert venue, and hands-on exhibits such as On Stage, where you get to play rock star for a little while. The MoPop is located in the Seattle Center, which also features many additional rainy and sunny activities.

Heart of The City

The Seattle Center first opened in 1927. The original Civic Auditorium is now Marion Oliver McCaw Hall, and Civic Arena is now the Seattle Opera at the Center. Many of the buildings were initially built for the 1962 Seattle World’s fair. One of the most famous structures is the Space Needle. According to Space Needle, in 1959, Edward E. Carlson, who was organizing the World’s Fair, went to Stuttgart, Germany, and saw a broadcast tower that featured a restaurant. He began to sketch an idea, feeling that a similar structure could quite possibly be a lasting monument in the city. Some of his early ideas included a building designed to look like a UFO and a cocktail shaker. Additionally, instead of the elevator that takes people to the top, he wanted a tram similar to one that would take skiers to the top of mountains. Carlson’s vision certainly fit the theme of the 1962 World’s Fair, The Age of Space. Additionally, it was a harbinger for Seattle, which would later be at the forefront of technology with companies like Microsoft, Boeing, and Amazon. The Space Needle has both indoor and outdoor observation decks, so even if the weather surprises you, you’ll still be able to enjoy panoramic views of the city and Mount Ranier. Another fun place at the Seattle Center is the Pacific Science Center, a non-profit dedicated to creating an environment of learning with hands-on exhibits that can be enjoyed by all ages. Additionally, it offers conservation programs to help people learn about ways to help keep Seattle and the environment clean. The Pacific Science Center is eight-building in one, including two Imax theaters, the world’s largest Laser Dome, a tropical butterfly house, and a planetarium. Throughout the year, the Center adds temporary exhibits to their expansive collection of permanent exhibits.

Public Market Center, also known as Pike Place Market, opened on August 17, 1907, and is the longest-running public market in the United States. Aside from the largest market, which features many local farmers, craftspeople, and quirky stores, there is also a lot of activity outside for people to enjoy on sunny days. Additionally, the area around the market houses a few other destinations filed under only in Seattle. Across the street from the market is the original Starbucks that opened in 1971. The interior and exterior haven’t changed and remain a historical tribute to Seattle’s best offering, coffee. So, if you need a warm beverage because you got stuck in the rain, this is a great place to dry off and soak up another piece of Seattle history. Another landmark in Seattle is the famed gum wall. Yes, it’s not for everyone, but it’s a short walk away from the market and maybe worth a look. Pike Place Market Preservation and Development Authority tried to stop the wall since they found it unsightly. Yet, people quickly started building it back up with pieces of chewed gum, and the PDA gave up. The rest is Seattle history and another site to see in the city. So, if you are interested in leaving a mark in Seattle, this may be the way to do it.

Seattle is a beautiful city year-round. During the winter, much of the rain turns to snow, and people who enjoy activities like skiing will find the city a great place to stop over before heading to the slopes. If you visit in September, you may want to start an earthquake in Century Link Field, home of the Super Bowl Champions, Seattle Seahawks. The stadium was built for fans. It holds the Guinness World Record for loudest crowd noise which peaked at 137.6 dB, causing an earthquake. Nonetheless, if you want to enjoy the broadest range of activities, summer is the best time. Don’t forget your umbrella. After all, it is Seattle, and you never know when a chance rainshower will happen. If you do, you’ll find a coffee shop on nearly every corner or a short sprint out of the rain.