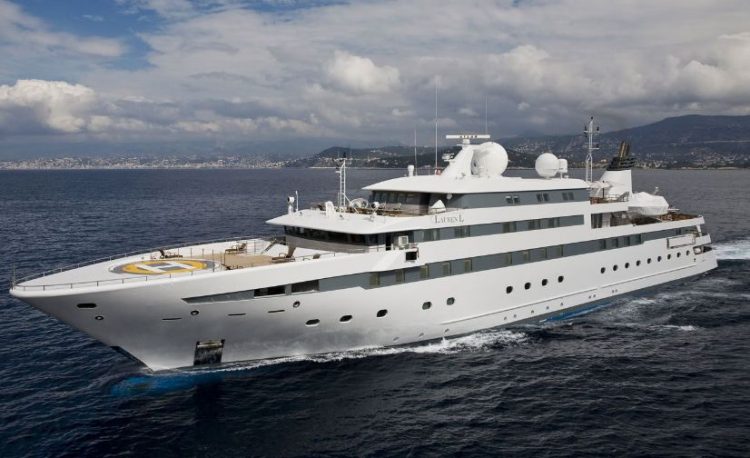 Sometimes you just want to escape the chaotic world in a big immaculate boat. And very few vessels say BIG as loudly as the 90m superyacht “Lauren L”. Launched in 2002 as a passenger cruise yacht, the boat could originally accommodate up to 100 people. She received a significant makeover two years later that saw her function change from commercial to private. Constructed by the German-based shipyard “Cassens- Werth,” the yacht was passed over to her third owner in 2007, subsequently entering the charter market and undergoing several notable renovations.

These changes included extending her length by 5 feet, relocating the helideck to the bow, reconfiguring the guest cabins, and expanding the top deck to incorporate a new beauty and health spa. However, she retained her capacity to entertain on an unparalleled level. She features twenty staterooms that can accommodate up to a stunning forty guests at sea, and up to three hundred people at dockside. Let’s take a closer look at Cassen’s Werft’s Lauren L. 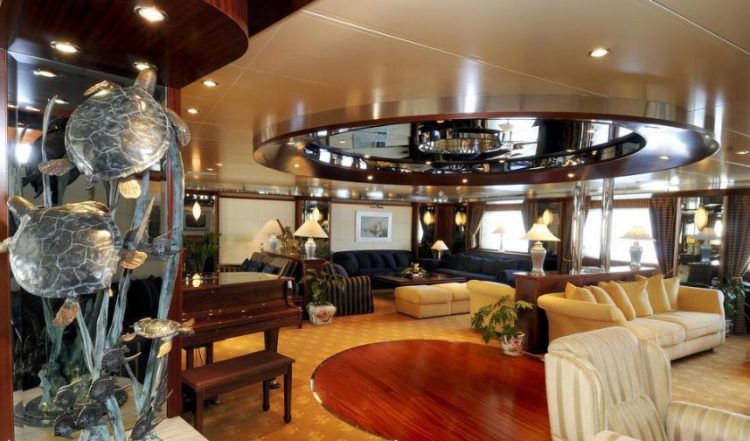 After making a name for himself in large charter yachts, Andreas Liveras was still in distress. The Greek owner of Liveras Yachts (which is based in Monaco) had 15 vessels under his name since 1985 and a couple of skyscrapers that he’d established from scratch. His next big ambition was to construct two 354-ft sister ships, a project that begun in late 2008 with an aim of joining the top ten, if not five, largest charter yachts on the planet. However, while still in the design stages, Liveras realized that time was not on his side.

His clients were impatient, and the ships would not launch until 2011/12. They needed to charter NOW, and were planning to bring thirty to forty guests per trip paying up to $1 million a week. He recalled that, back in 2003, he had seen a 290-ft yacht dubbed Constellation, which had fatefully turned from a commercial to private vessel. Built in 2002 as a German cruise ship, she had passed hands to a private Russian owner and received a significant makeover. Although the facelift was spectacular, it was based on his personal requirements. This basically meant that it was not ideal for charter. When Liveras bought the ship, he put her into charter for a couple of months for testing, and then sent her for an 8 ½ month renovation in a Greek shipyard.

The refit, which involved stretching the then Constellation up to 295 feet from 290, meant to incorporate the requirements of charter clients in a stratospheric price range, at a luxurious quality. The interior was supervised by Sophia Liveras Dafnia (Liveras’ niece), working closely with her husband – who was surprisingly the naval architect. The pair had also been in charge of Liveras’ other yachts. The result was an elegant charter yacht that matched perfectly with the clients’ demands, now commonly referred to as Lauren L. 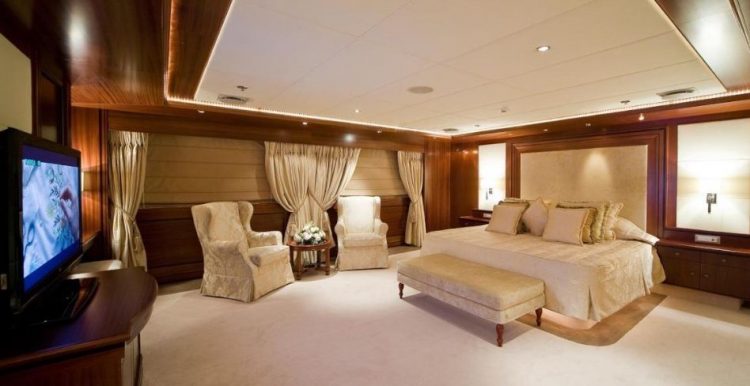 The Lauren L extends up to 295 feet in length, and comes with a variety of luxuries to ensure exceptional and personalized service. She boasts a full gym & spa, a helipad pad, a Jacuzzi, and a top deck bar that comes with a sunbathing platform. The boat’s magnificent layout is spread over 4 decks, occupying a total of about 20,000 sq. ft. It is made up of twenty staterooms, with the spectacular owner’s suite sitting 1,200 ft. on the bridge deck, also featuring a lounge, a balcony, king size Californian bed, latest entertainment system, a separate office, a walk-in wardrobe, and a spacious en-suite bathroom equipped with a double-size spa.

The recent refit oozes a feeling of luxury and elegance. The main salon represents style and relaxation, where guests are treated to a cocktail as they listen to the grand piano or unwind in one of the several seating areas. Onboard, there are numerous multimedia systems and 50” plasma TVs fitted throughout the ship, including in the conference center, the library, and the main lounge. An exquisite formal dining room on the interior allows visitors to enjoy lavish gourmet meals, reminiscent of 5 star restaurants, cooked by the boat’s own chef. There’s another dining area outside, with a 50-people capacity, which allows you to experience the best of al fresco dining. Kids also get to enjoy a wide range of activities in the children’s playroom, while adults exercise their muscles in an elite gym with state-of-the-art sporting equipment. Professional beauticians are also available on request, at an extra charge of course.

The spacious conference room on Lauren L’s main deck can be converted into a cinema, while the library can provide a perfect meeting venue for conducting business. Consequently, the yacht is ideal for holding events such as: large private gatherings, cocktail parties, buffet diners, luncheons, celebrations, board meetings, product launches, and receptions, among others. The exterior comprises a steel hull and wood/steel superstructure, featuring an ultra-modern stabilization system that ensures maximum comfort throughout the charter vacation while reducing roll motion effect. 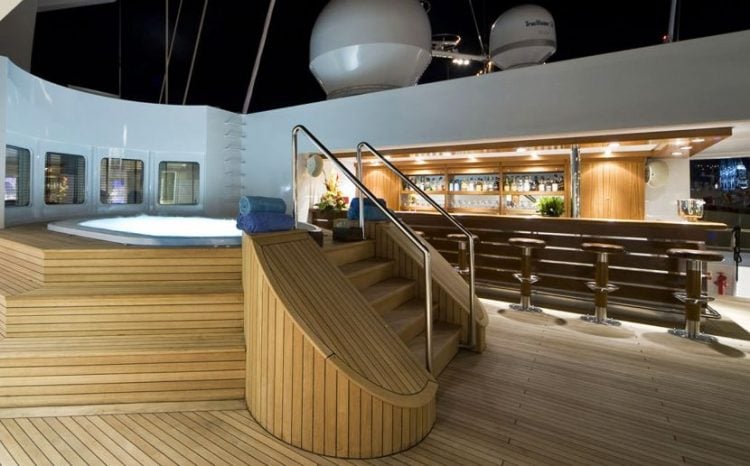 It costs about $750,000 per week to charter Lauren L. The luxury motor-yacht is a great choice for renting in Turkey, Greece, Montenegro, Croatia, Spain Balearics, Spain, France Corsica, France, Monaco, Italy Sicily, Italy Sardegna, and Italy as a whole. It is the perfect private yacht for a memorable family vacation, a spectacular conference meeting, or an ideal corporate venue. Winter charters are also available in the Indian Ocean and South-East Asia, while summer charters can be booked in Mediterranean ports.

20 Things You Didn’t Know About Pieter Van Der Does

The 20 Best Places to Live in New Zealand