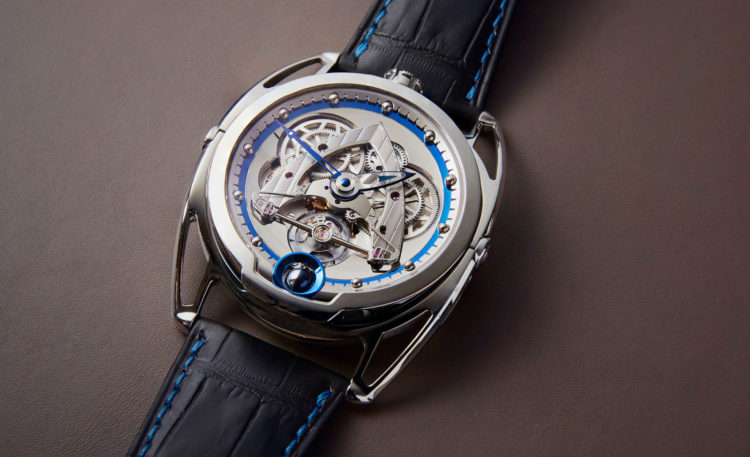 De Bethune is a revolutionary watch brand. The company was originally established on the idea that the initial founders David Zanetta and Denis Flageollet had to create their own movements – a blatant affront to the Nivarox-dominated world of the early 2000s. With the founding of De Bethune in 2004, they even released their own balance wheel that performed 20% better than comparable wheels. The atelier recently underwent a change in ownership, but the brains behind their awesome designs – Denis Flageollet – is still in charge of the brunt of the watchmaking work. He recently put the finishing touches on a new watch design that is sure to impress even the most seasoned watch collector.

The De Bethune DB28 Steel Wheels Skeleton is Flageollet’s take on creating a skeletonized version of the original DB28. Though it pulls bits and pieces from older designs from De Bethune, as well as obviously taking a heavy influence from the DB28, this watch emerges as something that is distinctly its own. This offering from De Bethune is definitely one of the top timepieces we’ve seen so far this year. 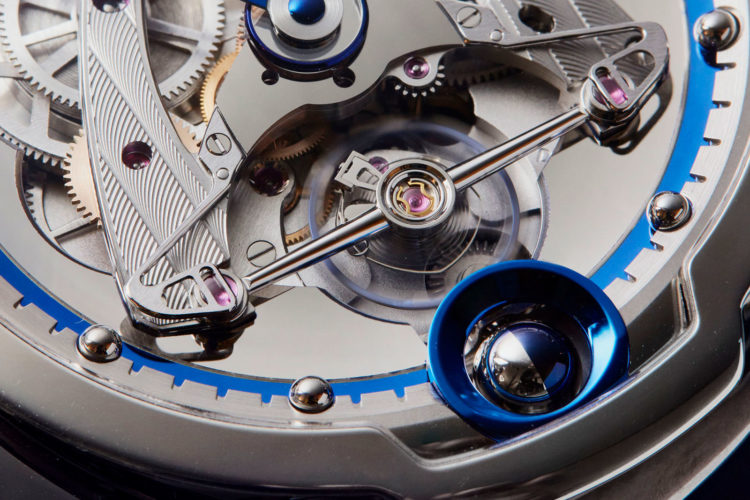 The very first thing you will notice about this watch is that it has a distinctly futuristic look. The exposed-mechanism construction almost makes it look like some steampunk technology or perhaps something that someone from 2118 would wear. The watch makes use of just the right angles and curves to provide a nice, active design that looks great on anyone’s wrist. The hour markers on this watch have been created from titanium spheres that have been polished to a distinctive shine. They contrast excellently with the blued titanium rim and accents, making this watch pretty easy to read despite its avant-garde design.

This watch also includes a moon phase indicator. The ball used to indicate the phase of the moon is half blued titanium and half polished titanium. This provides a pretty neat effect at the six o’clock position on the DB28 Steel Wheels. You will also notice that the triangular bridge has been engraved with a repeating pattern reminiscent of the Cotes de Geneve pattern. However, it is much more brash than the original Cotes, so it ends up being its own distinctive thing. It looks great on this watch, and really ties together the “active” vibe that this watch exudes.

The hands on this watch are blue titanium, making them quite easy to read against all of the polished titanium and steel. The hour hand is particularly cool due to its semi-transparent design. The blued titanium merely makes up the rim on this hand. 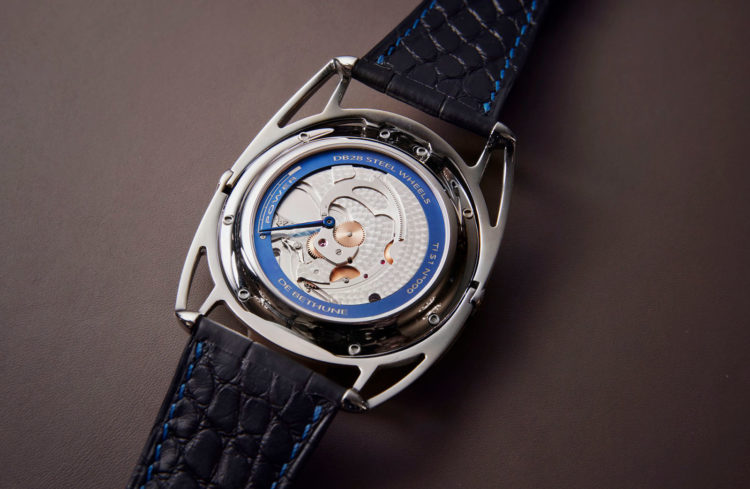 Encased in a gorgeous grade 5 polished titanium case, this watch makes use of the same exact DB2115V4 movement that its predecessor (the DB28) used. Though it looks more mechanical and complex, this is simply due to the skeletonized construction used on this watch. The De Bethune DB28 Steel Wheels features most of the visual action on the front of the watch. You can also see this watch in action from the back, though it is much plainer. The reverse side of the watch does feature a blued steel hand that is indicative of the remaining power reserve. Speaking of which, this watch boasts an incredible six days of power on a full wind.

A watch can’t really be considered a De Bethune timepiece unless it incorporates some of the revolutionary designs that this atelier loves. In this particular piece, the mechanism includes a balance spring with a flat terminal curve, an escape wheel constructed of silicon, a triple pare-chute shock-absorbing system, a high-performance titanium balance wheel, and optimization for air penetration and temperature. These innovations have copyrights dating to 2005.

The Strap and Price

The De Bethune DB28 Steel Wheels will be sold with a black leather strap. Included on the strap will be some blue stitches that match the blued titanium used so frequently throughout the piece. It should be coming out in April 2018. The production run of this watch will be limited to 25 pieces. Each will cost approximately $80,000 – which isn’t too bad for a piece of art like this. The value of these watches will hold pretty well, as they are definitely collector’s pieces.

If you are looking to buy a high-end luxury watch, and you like skeletonized designs, your top choice is probably going to be the DB28 Steel Wheels. It is aesthetically-appealing while sticking out from the crowd, and flips many watchmaking traditions on their heads. Any discerning collector would appreciate this watch – even at the $80,000 price.