Home
Cars
A Closer Look at the Nissan 370Zki 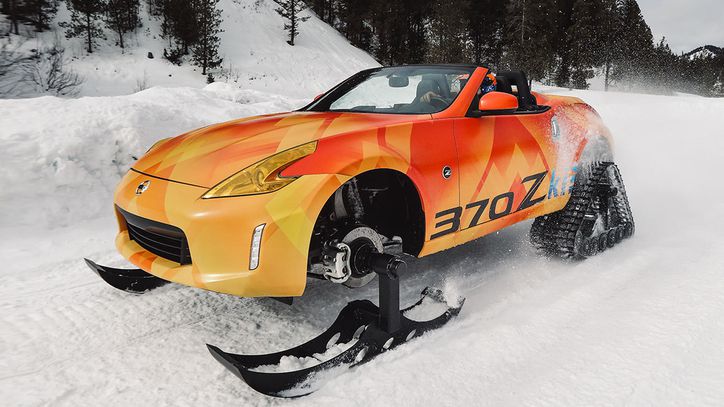 For tackling winter conditions, your first instincts might be to get some snow tires, drive something with four-wheel drive, or throw some sandbags in your trunk at the very least. You might even decide to just wait for the plows to come through and take a personal snow-day. But if you’re an engineer at Nissan, you’d just convert a 330-horsepower 370Z into the world’s coolest snowmobile. Now known as the 370Zki – pronounced ‘370-Ski’—the car has been retrofitted with skis on the front, and purpose-built ‘Dominator’ tracks on the rear.

Nissan was originally meant to introduce this vehicle at the Chicago Auto Show, which is to take place from February 10 to 19, and will be held at the McCormick Place convention center. However, they just couldn’t resist showing off this testament to Nissan’s penchant for upping the ante with their winter vehicles. Read on to learn a little more about the engineering behind this slope-conquering 370Z conversion.

How Did They Pull It Off?

The first thing you will notice about the 370Zki is that it rides considerably higher than a stock model. This is due to the 3-inch lift kit that was installed in the vehicle. This allowed enough room for the tracks and skis. Engineers modified the front-end suspension to accommodate for the lift. They created some adaptors as well. This ensured that the skis had enough suspension travel and the proper ability to rotate. In the end, this meant that the car was easily controlled and basically glides in the snow.

The body was also slightly redesigned, with the fender wells being cut down to accommodate for the new kit. The rear wells took the brunt of it, as they needed to make way for the large, powerful snow Defender snow tracks. Interestingly, they used the factory brakes. However, it required rerouting the factory brake lines. In addition, the exhaust system had to be modified to ensure a proper fit. More custom modifications included custom engine and transmission mounts, as well as a front skid plate to protect valuable parts from damage.

This thing will tear through the snow with the 3.7-litre V6 motor. Though it is bone stock, it is still aggressive and fast. There haven’t been any problems navigating this ride through tough trail It also has a classic Japanese sports car exhaust note – serving as the cherry on top. The Nissan 370Zki sends all of its impressive horsepower to the rear wheels – well, tracks that is. It accomplishes this through a seven-speed automatic transmission that was originally meant for racing. Though there isn’t too much information available from Nissan on the specifics, we do know that this vehicle has already proved itself in deep snow and harsh conditions.

The exterior design on the Nissan 370Zki was custom-created by Icon Image Graphics. This company is based in Cerritos, California and boasts some of the best custom designs on the market. It was applied to this car via a vinyl wrap. The design was also complemented by the yellow tint that they elected to include on the headlights. This was meant to give the impression that the car is wearing ski goggles – and it pulls it off. The tint looks really nice with the rest of the design. Sometimes, colored headlights can be distracting, but they work here.

Will It Be Available to the Public?

While there is always the possibility that massive demand will lead Nissan to release this concept as a production model, it is highly unlikely. Instead, it will probably remain a one-off for this years Chicago Auto Show. However, a truly dedicated gearhead could develop a similar build on a 370Z at home.

This innovative ride from Nissan is sure to be a hit at the Chicago Auto Show. Though it may just be a one-off, it represents far more than just itself. What the 370Zki proves is that the engineers at Nissan are capable of much m than just creating cars that are fast on the tarmac. They are capable of rising to any challenge, and meeting and exceeding it. If you check out the Chicago Auto Show, be sure to make some time to watch the Nissan 370Zki tear through the snow. The show starts on the 10th and will end on the 19th, and will take place at the McCormick Place convention center in Chicago.