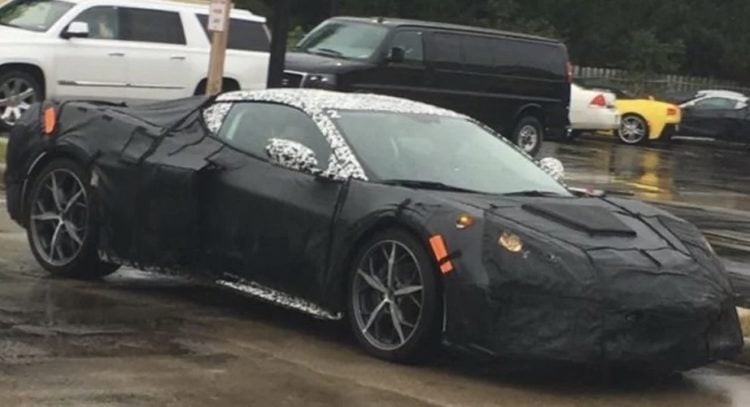 Most manufacturers are racing to create a next-generation model that will help them stay competitive in whatever market they operate. GM being one of the leading manufacturers in the world isn’t taking chances either, if rumors of their new Corvette is anything to go by. The new 2020 Chevrolet Corvette seem to have finally materialized after a prototype that resembled a Chevrolet Corvette with an engine in the middle was seen being tested. This model is expected to be the next-generation Corvette to be released in 2020. It was initially thought that theC8 going to go into production in 2019, however, the 2019 model has already gone into production.

When you compare expected lifespan of the 2019 model with that of the present C7 Corvette, the C7 has had a relatively long lifespan since its arrival as 2014’s model. The explanation for such a speedy changeover is that, General Motors scuttled plans for a mid-range engine it had already began designing it, before it faced the 2009 economic crunch. GM used the C7 was therefore used as a placeholder as it fast tracked the new model that would have next-generation features.

From the new photos of the C8 prototype, its size will be closer to the present C7, but will have a lower and wider stance. However, it doesn’t look like that it will have the exotic doors that lift vertically commonly seen with high-end sports cars. However, it does seem to have a front overhang that’s short. Two chunky buttresses will flank the engine comportment, and designers are planning to make the engine visible from the top of the hood by making a section covered with glass. The only challenge they are tackling is managing the heat emitted from the engine.

Most of those who have managed to get shots of the prototype have managed to do so at night because GM wants to avoid giving away the design too soon. With long-distance camera lenses and resolutions as high as 50 megapixels, you cannot blame them for being too careful. Moreover, the design has only been circulated to a limited number of employees who include engineers and designers. That was also the situation with the GT supercar from Ford.

However, the 2020 Corvette isn’t going to be a limited edition model or even pricey such as GT. Unlike other brands that choose the middle-engine design for their pricey models, GM chose the design because it chose to use the aluminum space-frame structure, instead of a new design. Moreover, there are rumors that the 2020 Corvette may feature a LT7 with a twin-turbo aerated V-8 engine, and after some time, a hybrid engine. However, the initial engine will be LT1 V-8, used by the C7.

One of the reasons that GM has chosen to make such a theatrical change, is it believes a rear-wheel-drive design, with front a front engine has been stretched to its limits. Moreover, the Camaro from its Alpha platform seems to be on its heels, and therefore a more exotic design will help to distinguish the future models of the Corvette from Camaros. Others believe that the mid-engine history is associated with the Z. Arkus-Duntov, who is the father to the Corvette, is also a motivation because they know it has proofed itself in past tests.

He liked the design especially when used for motorsports. GM’s initial middle engine designs were built with some of his ideas, with the Chevrolet Engineering Research Vehicle or CERV, being the first to be manufactured in 1960. It’s therefore won’t be a surprise the Corvette ZR1’s successor got branded after him.

While using the mid-engine will be a unique change for the C8, there will be another change as well that’s equally important; and that’s its pricing. The C7 was selling for about $60k, the C8 is set to sell at an initial price offer of about $80k. The new price will cater for the changes in design of the car, which will help to distinguish it from the Camaro. Moreover, the changes will make the 2020 C8 become Chevrolet’s global halo model, which is what Nissan has in its GT-R model, and what the NSX model is to Honda and Acura.

Bowling Green, which is Corvette’s home in Kentucky, will also be the car’s production base. Close to $750 million has been invested in the plat by GM to make it ready for production of the C8. While it’s sad news that the present C7 is expected to be the final C series with a front- mounted engine, the ZR1 may have been introduced to make the send off more pompous.

We all look forward to the release of the C8 and excited about the hope it brings for GM fans.