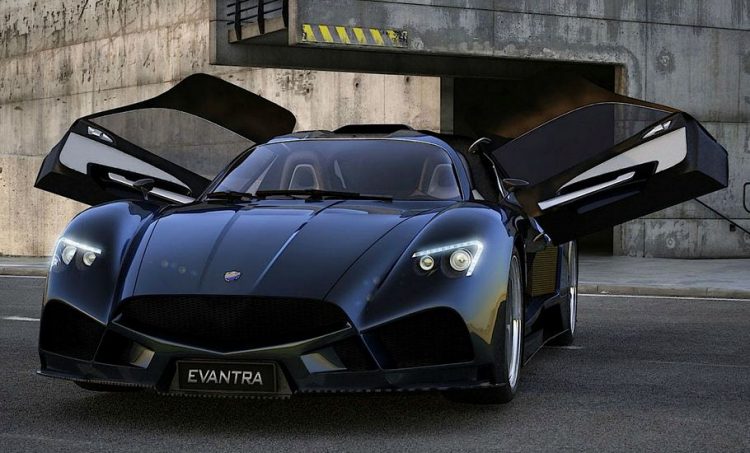 When supercar designer Luca Mazzanti teamed up with classic car restoration specialist Walter Faralli in 2002, the result would eventually become Mazzanti Automobili. The Italian boutique automaker focuses on creating handcrafted cars that have high end looks, premium features, and superb performance. The car that helped Mazzanti Automobili gain international exposure is the Evantra, a coupe with gorgeous style and power that commands attention. The Evantra has a fairly brief history and has only been around since 2013, but in the short time since its debut the car has already undergone a number of key changes. Luca Mazzanti worked with designer Zsolt Tarnok for three years before finalizing plans for the Evantra concept in 2011. Because it was made to have such a high degree of customization, the production target for each year was set to a low of five and construction on the first model started in 2012. By 2013 the Evantra concept was ready for the public and it became an instant hit. A prominent fan of the concept was Sony Entertainment, which bought rights to include the Evantra in its hit driving simulation video game DriveClub. This was a huge milestone for the brand, and having the car featured in such a popular game brought Mazzanti some much needed credibility. The press coverage and interest from auto aficionados that the car garnered gave Mazzanti Automobili the boost it needed to press forward, reorganize its production for efficiency, and move on to the next phase. Mazzanti Automobili’s Evantra is a two seater coupe with a boxed steel chassis. A framework of chrome and molybdenum tubes connect to the chassis as well as the car’s gearbox compartment. This setup is important because with a car that has the speed and power of the Evantra, extra measures to ensure safety had to be taken. As a result of its structure, the car’s chassis is rigid and safe for the road.

The body of the Evantra is partially handmade, which is part of the reason why the car takes so long to produce and production is limited to five vehicles per year. Hand forged aluminum, elements that can be customized to the buyer’s liking, and technologically advanced carbon fiber help give the car its exclusive look and feel. Being comprised of such materials and containing handmade elements is also what gives the Evantra a price tag that exceeds $800,000.

Inside of this Mazzanti Automobili creation is a wealth of lavish features. The instrument panel is integrated into a central console that has a distinctive, sporty look, and it comes with unique trim and a multimedia system. The engine start button’s function and placement was borrowed from the Antas, the Mazzanti Automobili vehicle that preceded the Evantra.

The central console also has a feature that allows the driver to choose between two different modes: road or race. Complementing the interior is an AIM steering wheel that displays both the car’s speed and its current gear. As is the case with most pricey supercars, the Mazzanti Automobili Evantra has loads of options and elements that can be customized by the buyer. This is especially true for the car’s interior, of which nearly all aspects can be customized.

To reach a power of 701 hp, Mazzanti Automobili put a 7.0 liter aspirated V8 engine into the Evantra. Power is one thing that the brand wants the model to be known for, and the other is speed. The first iteration of the Evantra was designed to exceed 217 miles per hour and it can accelerate from 0 to 100 in an impressive 3.2 seconds. To keep up with these numbers the car had to be fitted with high performance tires and a top of the line Brembo braking system. In 2014, just a year after the Evantra was first made available, Mazzanti Automobili started thinking forward and aimed to become apart of Italy’s most esteemed supercar marques. First, however, the brand had to work on getting it’s name into the minds of the masses, which lead to the production of an Evantra prototype that was more powerful than the original. The car impressed at the Top Marques Monaco Show when it was initially revealed, and Mazzanti Automobili started introducing upgrades to the Evantra each year.

After the 2014 prototype, next up was the 2015 Evantra that sported a white dolomite paint job and had 751 hp. That’s quite a powerful car, but Mazzanti Automobili didn’t stop there on its quest to make a name for itself and become a household name.

Mazzanti Automobili continues to produce the Evantra today, and the automaker has maintained its tradition of only producing up to five of the cars per year. 2016 marks the debut of the Mazzanti Evantra Millecavalli, a souped up iteration of the car with an engine that produces a staggering 1,000 hp. With the Evantra Millecavalli, Mazzanti hopes to propel its status and become known for creating what it calls Italy’s “most powerful street-legal supercar ever”.

How does this incredible ride get its power? From a 7.2 liter twin turbo V8 engine with an output that pushes straight to the car’s rear wheels. To help it along, Mazzanti specially designed a six speed sequential transmission just for this model. Without a doubt, this version of the Evantra is a hypercar. It can reach a top speed of 250 miles per hour, goes from 0 to 60 in 2.7 seconds, and has super efficient carbon ceramic brakes that can bring the vehicle to a stop from 186 miles per hour in just seven seconds.

The exterior of the Evantra Millecavalli is more aerodynamic with vented and flared arches, a centralized quad exhaust, front bumper canards, and a front splitter, plus it has an overall aesthetic that makes it look like it belongs on a race track. Mazzanti Automobili unveiled the car on June 12, 2016 at the Salone dell’Auto di Torino Parco Valentino, and it’s been turning heads and causing buzz ever since. While the Evantra’s production has traditionally been limited to five cars per year, the Evantra Millecavalli’s production will be limited to 25 vehicles period. The standard Evantra costs over $873,000, but the latest version of the car is estimated to cost as much as $1.2 million once it’s available for sale.