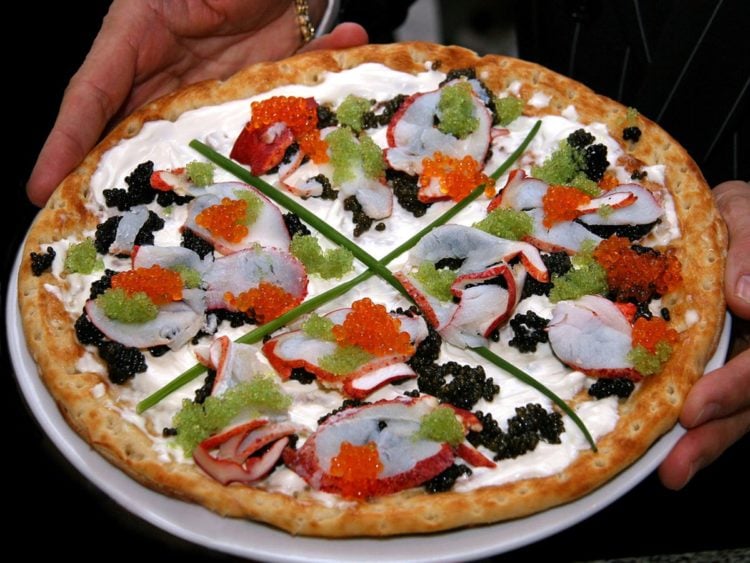 Pizza is one of the most popular types of food in America and many other areas of the world. The modern version of the food was invented in Southern Italy, which consists of a flat pie that is made of a yeast dough and topped with toppings, such as cheese, meats, vegetables, seasonings, among many other ingredients. There are a number of variants to the food, and you can get pretty creative with this dish to make your own specialty pizzas. If you are a pizza fan, you may have tried pizza from all kinds of restaurants and from 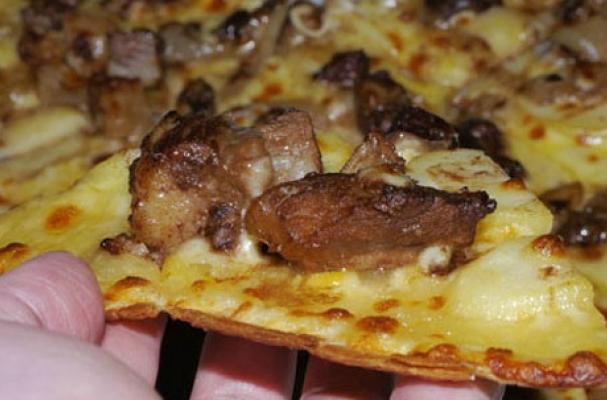 You’re going to hear about gold flakes being laid atop the ingredients on some of the following pizzas, but this one does not have that kind of extravagance. It is kind of basic, comparatively, but it’s still a lot more than a regular Dominoes pizza restaurant. At $66, it would be considered quite expensive, but it’s because it’s made with Kobe beef and it’s sold at, yes, Dominoes, however, only in Japan. It’s considered to be a luxury pizza, and apparently the cows that provide the beef, are said to actually be fed beer, and then they are given massages in order to achieve a marbled meat that is more juicy and tender than other beef. Along with the Kobe beef, potatoes and onions are on this pie and it is a popular choice for customers. 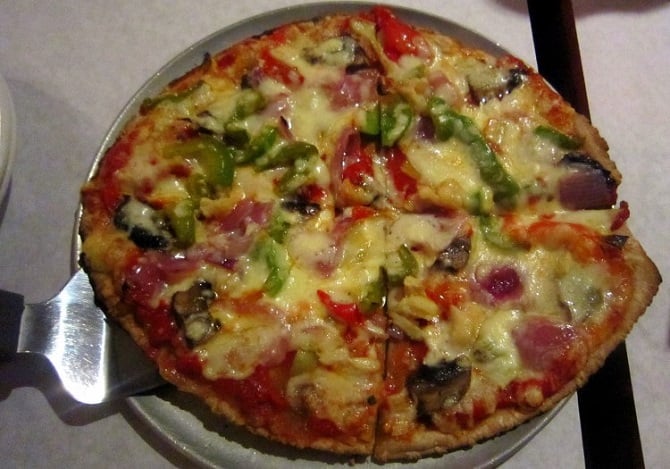 We all think of pizza as being a bit unhealthy, and that is due to all the dough, cheeses, pepperoni and other fattening ingredients that can be put on pizzas. But this one happens to actually be a bit healthier. It is found in a restaurant in Toronto, Canada, and it is not only gluten free, but vegans can partake in this pizza delight, too. All of the ingredients are organic, and for an extra expensive garnish, you get a gold leaf on your pizza that you can eat, too. This pizza costs $108, which although not as expensive as some on the list, it is definitely a top contender. 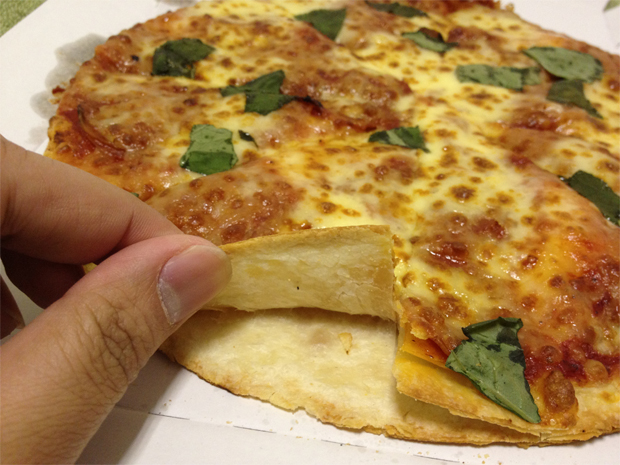 The unique difference with this pizza, that is in Japan, is the layers of crust and what is between the layers. It is a tri-tiered crusted pizza where delicious cheeses can be found tucked inside. Ordering just a plain cheese pizza won’t cost you the full $140, however, it is when you order the pizza with all of the ingredients that they offer, on it, that will jack the price up to $140. One downfall to ordering it with the full load, it will be a lot harder to eat, but there are a lot of people that do because it is a very popular menu item in Japan. 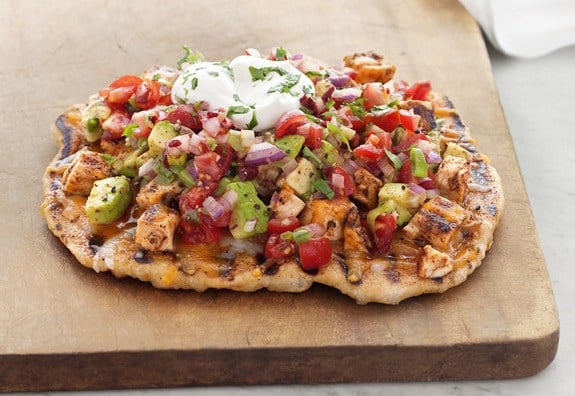 If you know Gordon Ramsay, then you already know he has been ruling the culinary world for some years. One of the most popular chefs in the world, there is a pizza that has been named after him, and it is in his own restaurant, the renowned Maze restaurant, located in London. Although it had been listed as the most expensive pizza at one point, it has moved down in the chain of pricey pizzas. What makes this pizza so expensive is the truffles that you get on this pie. It is then topped with Italian onion puree, a white truffle pasta, fontina cheese, fresh herbs, buffalo mozzarella, and cep mushrooms. Yes, it sounds like a lot, but the flavors supposedly work very well together to create a delightful pizza that will cost you $250 to try. 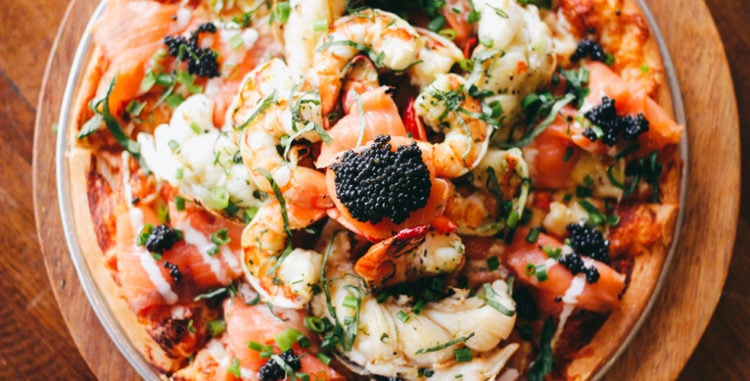 The C6 almost sounds like the name of a fighter plane, but it is actually the name of an expensive pizza that can be found at Stevetson Pizza in the British Columbia, Canada. This is another pie that uses the lobster as a main ingredient. Other ingredients you’ll find on the pizza, include, smoked salmon, tiger prawns, Russian Osetra caviar, and Alaskan cod. Sounds like a seafood delight, really. If you are into seafood on your pizza, you can give it a try and it will only cost you $450 to get a sampling of this very expensive and highly recommended pizza pie.

If you love lobster, this is a pizza after your own heart. This pizza is not only beautiful in its design and colors, but it boasts two lobster tails, plus you get six types of caviar on the pizza to satisfy even the most expensive taste buds. You can only get this particular pizza at Gino’s Restaurant, located on the Upper East Side in Manhattan. It is the traditional, 12 inches and is made with a thin crust, which is probably a good thing, considering that it is loaded with so much lobster and caviar – thick crust would probably be too filling. It has been said that it actually costs about $720 just to make the pizza, so when you pay $1000, the restaurant only makes $280 for each one that is sold. 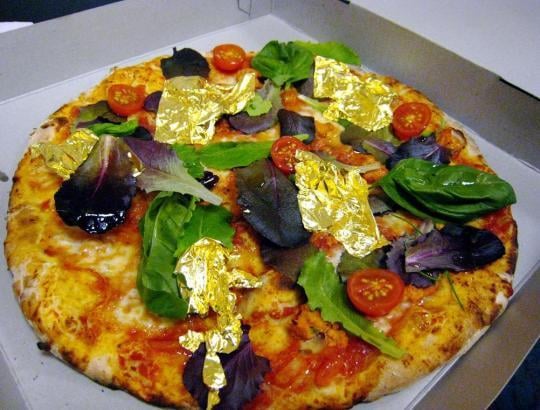 Fans of the infamous spy James Bond will love this Italian pie since he is the inspiration behind this creation. Created at a restaurant in Domenico Crolla Restaurant in Haggis, Glasgow, UK, this is a 12 inch pizza that has some of the most unique flavors, and unique ways of preparing the ingredients, like the caviar that is pre-soaked in Dom Perignon, there is also the flavor of Scottish smoked Salmon, and lobster that has been marinated in 100-year cognac. Other ingredients include, venison medallions and prosciutto. To complete the pizza, 24-carat gold flakes are overlaid on top of the pizza. If you want to treat yourself to a high-priced pizza that goes above and beyond pepperoni and anchovies, this one definitely does, but it would set you back a cool $4,200 if you do. 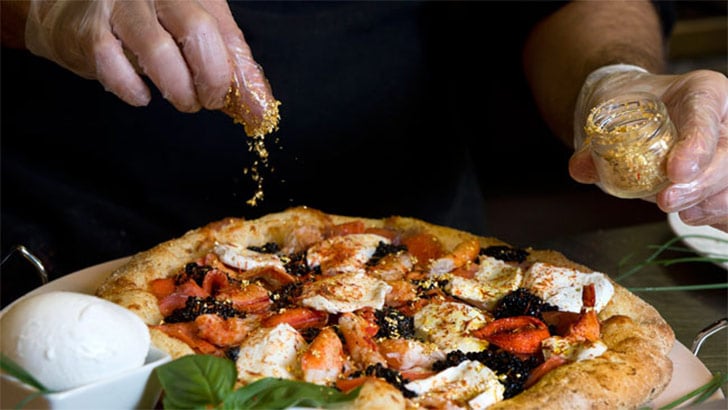 The Miss Verdun created a spectacular pizza that gives you a range of high end ingredients. These ingredients are uniquely put together on a pizza crust, but not only do you get one of the most incredible pizzas ever, but you get a personal chef sent to your home to make the pizza in your own home. And if you like to be entertained with music while you eat, you can enjoy the Chamber Orchestra, who also come to your home to play with you while you delight in your pricey pizza. The unique blend of lobster, caviar, and white truffles are all the flavors you’ll experience on this Italian delight, and to top it off, gold flakes are dusted over the whole pie. This pizza will cost you $4,250, but think of all you get with this particular deal. 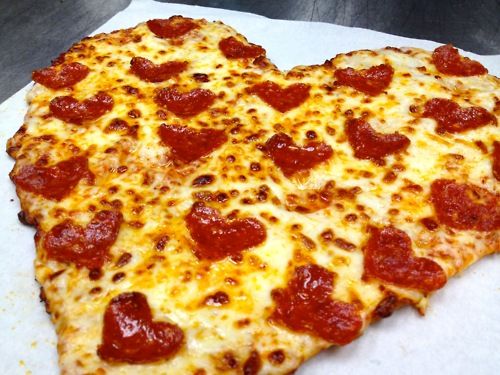 In Henrietta, New York, outside of Rochester, a pizzeria known as Favitta’s Family Pizzeria, which happens to be out of business now, since 2008, got a marketing idea, and that was to create a pizza for the holiday for lovers, Valentine’s Day. The pizza was then sprinkled with diamonds, and what goes better with a diamond-sprinkled pizza than an actual diamond ring and a bottle of Dom Perignon. There wasn’t too many pieces sold, as the owner was hoping that there would be couples ordering slices and popping the question – getting engaged over a slice of pizza, which would cost you $8,180 a slice if you wanted to ask your special someone to marry you this way. 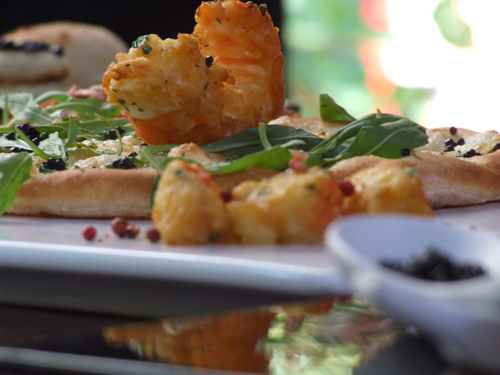 The Louis XIII is the most expensive pizza in the world and was created by Renato Viola, who created it for a select group of people. It was made for two, at just 20 cm, with a dough that takes 72 hours to rise, and allowing it to rest for a long time prior to being cooked. Once the dough’s ready, the ingredients are all prepared at the moment and put on the pizza. Speaking of the ingredients, what you’ll find on this extremely expensive pizza, are, three types of caviar, which include: Oscietra Royal Prestige, Kaspia Oscietra Royal Classic from the Iranian coast, and Kaspia Beluga. These are all very expensive caviars and are all very rare. You’ll also find a very expensive Lobster on this pizza, lobster that has been shipped from Norway. To top it off, there is lots of cheese, seven types to be exact, with the most common for any pizza,  being, Mozzarella. This is a $12,000 pizza, and it can only be found in Salerno, Italy. 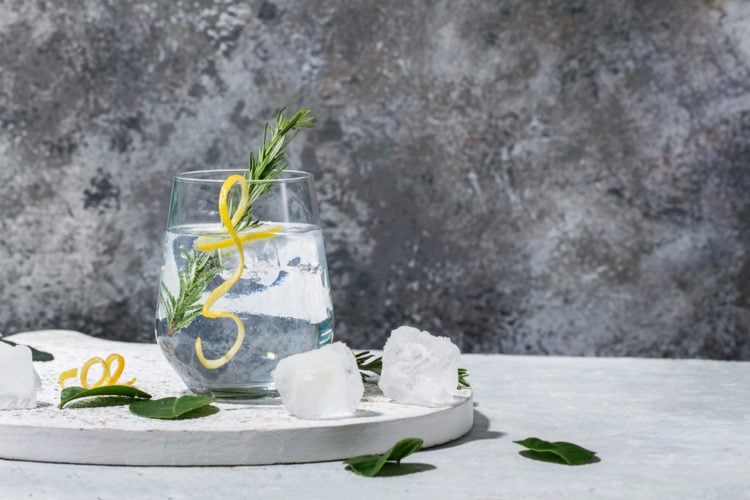 Mixologists are always on the search for the best ingredients to make outstanding signature cocktails. We can make the French 75 cocktail in a few different ways. You can include simple syrup, lemon juice, lemon… 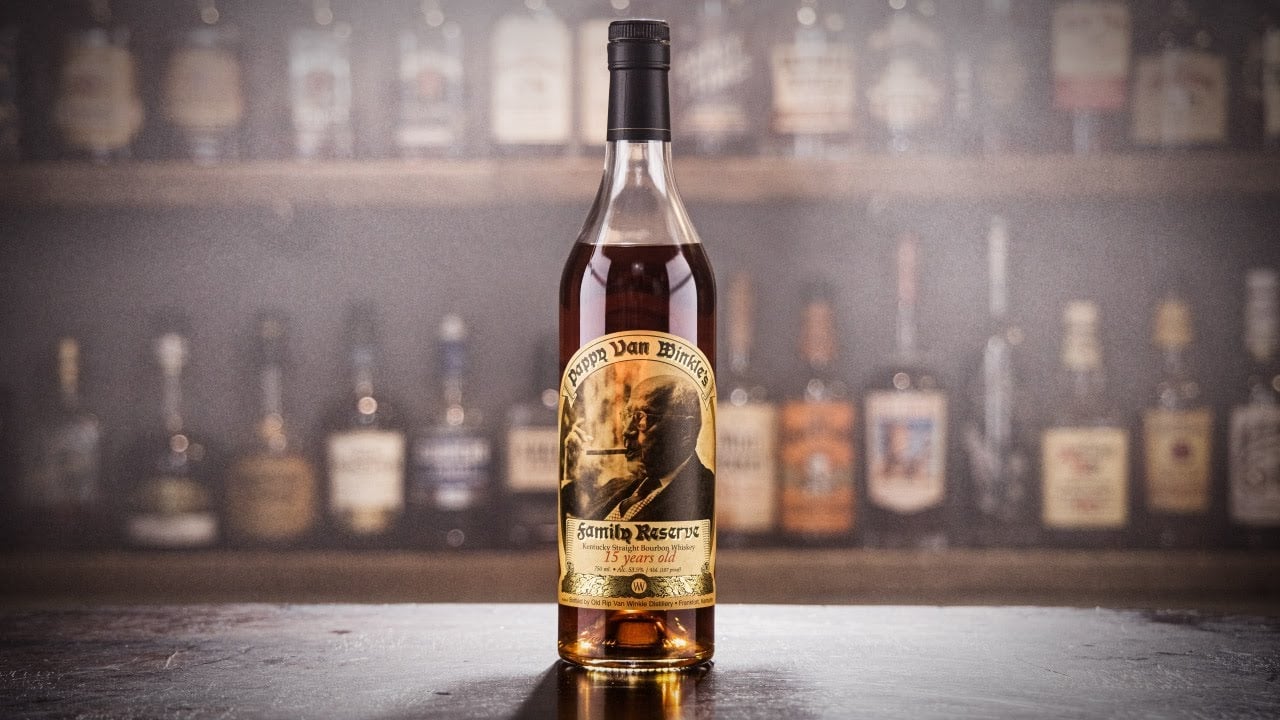 Technically, bourbon is defined as American whiskey. It’s not a flavor that every person enjoys, but for those who do, there are plenty of options available. If you’ve never really had the opportunity to enjoy… 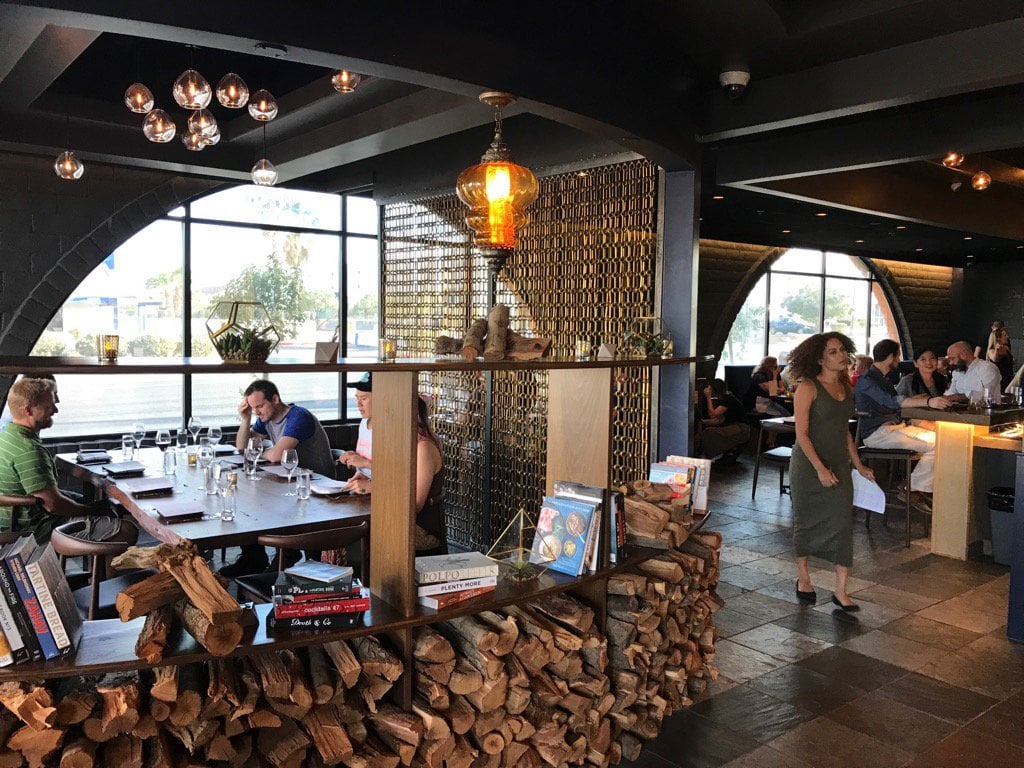 Las Vegas is a fantastic city to visit for many reasons. Located in the Nevada Desert, most people who head to this city do so to enjoy the world-famous casinos. Other reasons people choose a… 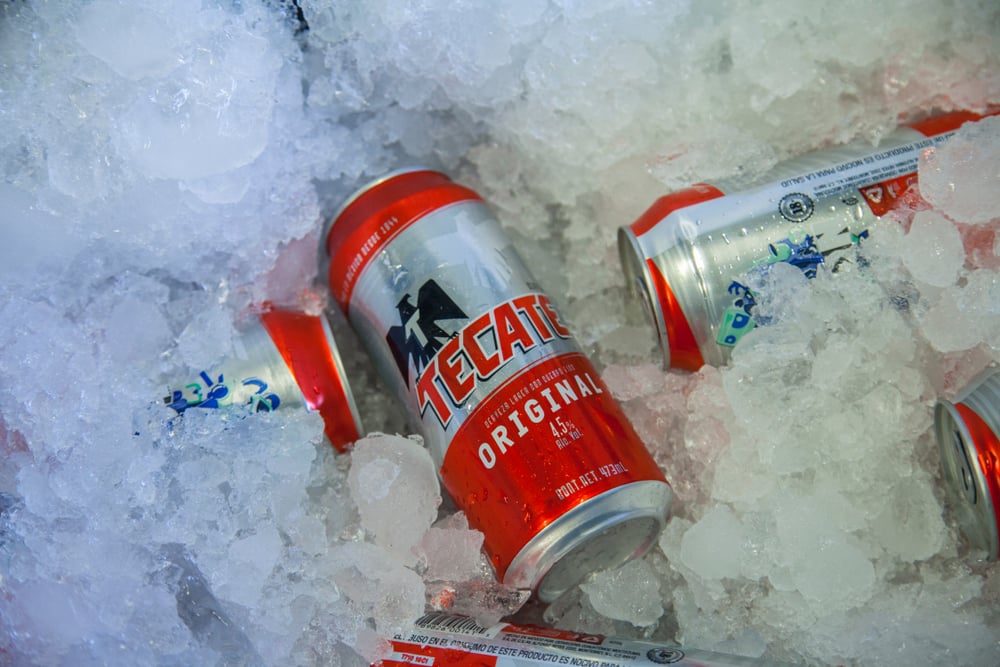 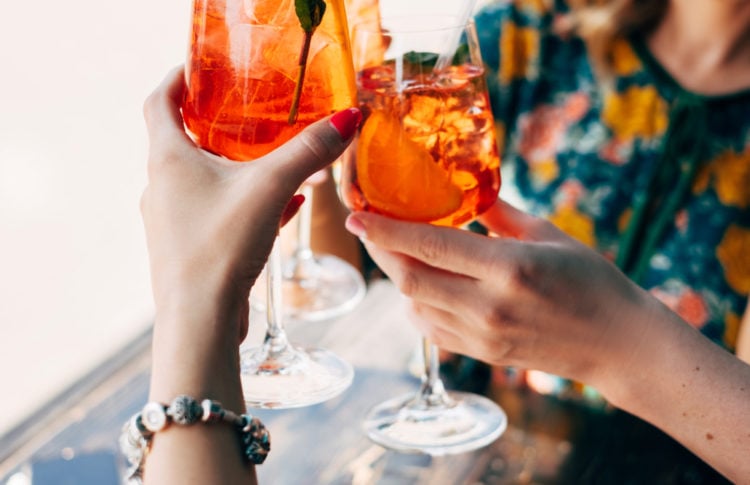 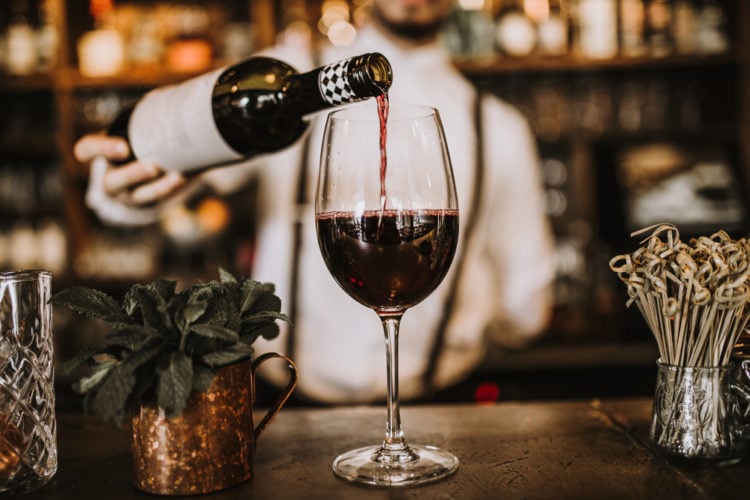 Italy might be smaller than California, but what it lacks in size it makes up for in quality. The country boasts over 2000 native grape varieties – not all of them are used in winemaking,…