Home
Travel
Family Adventure: A Weekend Away in Southeast Ohio 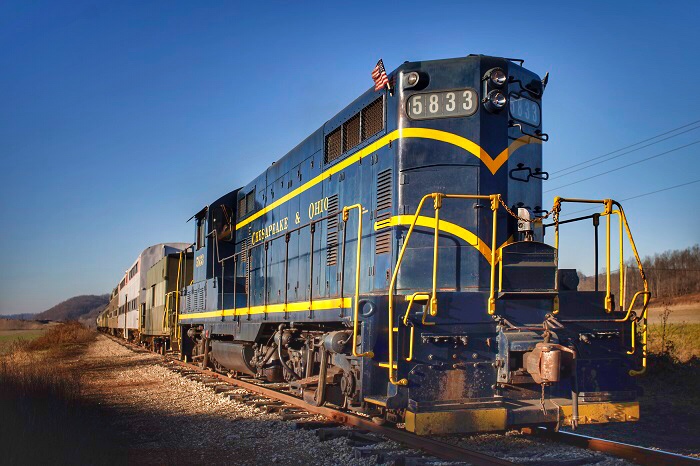 At the edge of the rolling green Hocking Hills of southeast Ohio, Athens and nearby Nelsonville, make for a great multigenerational family getaway. With a population of just around 26,000 people, Athens is a small town with big personality and a youthful vibe thanks to the 22,000 students attending Ohio University, which is located here. The school was founded in 1804 and has the distinction of being the first university to open west of the Appalachian Mountains.

Located just 10 minutes from Athens, Nelsonville is a picturesque town with a slower pace of life than Athens and a distinct family friendly feel. It’s also home to a beautiful and historic downtown where the sidewalks are lined with distinct star patterned glazed bricks known as “Star Bricks,” that even won first prize at the St. Louis Worlds Fair in 1904. 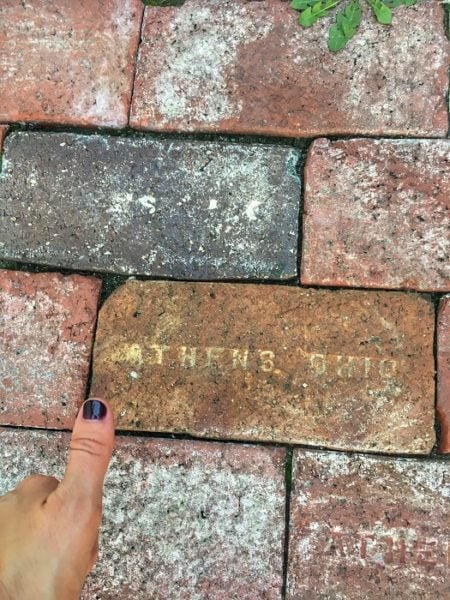 My mom, infant son Everett and I decided to check out this pretty region on a recent trip that put us in town just in time for the leaves to put on their magical autumn color show. We planned for three nights in the region, so we’d have two full days to experience the best of both places. Here’s how we spent our time.

We decided to start with a bike ride, so we headed over to Athens Bicycle to rent our ride. Owned by locals, the company is housed in a historic home that was once part of the Athens Brick Company and within easy access of the Brewed on the Bikeway path we were about to ride. Since we had Everett in a Burley on the back of my bike, it was especially important to not have to cross busy streets to reach the path, and I loved that I didn’t have to worry about it here. The staff is also super friendly and gave us the scoop on where to stop along the path, and what to order. 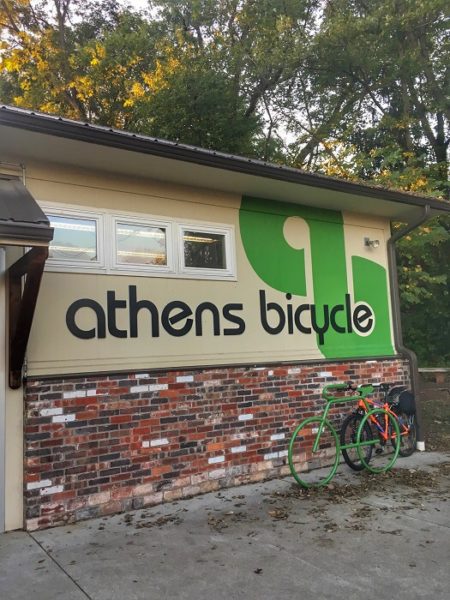 What to order you say? Yep. This isn’t just any bike path, the Hockhocking Adena Brewed on the Bikeway is a 21-mile trail that was constructed to take you to several award-winning craft breweries, cider house and other regional attractions along the way. We began by heading towards Nelsonville with our first stop 6-miles out at the Eclipse Company Store, which is also a brewery. Upon arrival we found more than 30 beers on tap and a food menu. We had worked up an appetite , so we ordered dumplings and a kolsh and stout. It was a perfect fall day with a clear blue sky and just the right amount of crispness, and all three of us enjoyed soaking up the country surroundings while two of us sipped our brew on the outdoor patio. The brewery is located in the town Hocking, which was a thriving coal town during the first half of the 20th-century. The building it is in really was an old company store that was operational between 1902 and 1948, closing for just two years between 1938 and 1940, and the interior retains the original hardwood floors and walls and has a rustic charm about it.

Our next stop was Little Fish Brewing Company, where we loved the family atmosphere with a large yard and plenty of toys for young kids to play with. The brewery is also very eco-friendly using 100 percent wind power sourced electricity and purchasing Ohio grown specialty grains like corn and spelt. They are known for meticulously crafted farmhouse ales and sours. We ended up staying for a while, chatting with local families, who said we had to try the Cajun Clucker food truck parked out front. The truck specializes in classic Cajun dishes like jambalaya and a delicious gumbo that I ordered. They also do po’boys plus New Orleans inspired twists on chicken strips and wings. After we’d returned our bikes, it was time for some ghostly on the grounds of the old Athens Asylum. Athens is known as one of the most haunted cities in the US, and is home not only to a one-time insane asylum, but also five cemeteries that surround it in the shape of a pentagram. As if this isn’t enough, the city is also built on top of a Native American burial ground. We didn’t go looking for ghosts on this trip, because we had Everett, but should you go looking there are plenty of ways to get the living daylights scared out of you here. Starting with an organized Athens Asylum Walking Tour that takes place on the third Sunday of the month between 2pm and 4pm on the Ohio University campus. On these local history expert George Eberts introduces visitors to all the haunted tales. But if you’re not in town for one, you can still do a self-guided walk and also check out the Kennedy Museum of Art on the campus grounds. Here you’ll find impressive contemporary print and Southwest Native American textile collections. On a Saturday morning you also don’t want to miss a trip to the Athen’s Farmer’s Market, which runs from 9am to noon on Saturdays year-round and also on Wednesdays from 9am to 1pm between April and December. It is a fun spot to wander with a little one, as there is plenty to keep them distracted, and my mom and I were able to sample some of the delicious food. A few favorites included Jackie O’s Pub & Brewery, which serves artisan sourdough, yeasted breads, sweet rolls and pies among other baked goods from their in-house bake shop. In season produce from the company’s farm is also on sale with many beautiful heirloom vegetables on offer. Since it was early, I was craving coffee and Silver Bridge Coffee Company delivered with fair trade, organic, fresh roasted coffee that I could purchase either a cup or a full bag of. After I’d woken up, I couldn’t help sampling the tamales and tacos from Nixtamalized. They are made completely from scratch with whole, local, sustainable organic ingredients, and I absolutely loved the peach paw paw BBQ chicken for its mix of sweet and savory tastes. 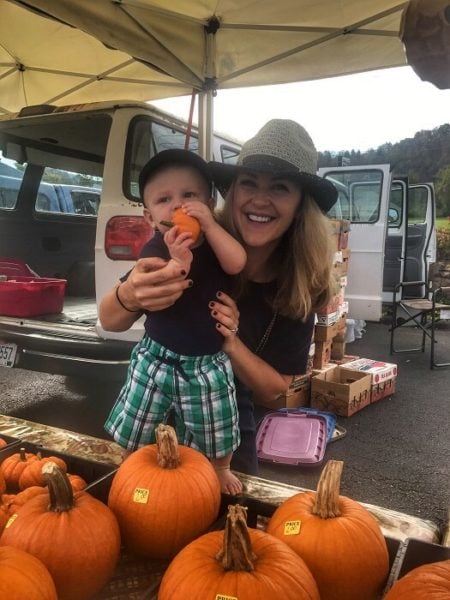 Nelsonville is just a 10-minute drive from Athens, but the city has a slower paced vibe that’s great for families. A former coal mining and brick making town, Nelsonville is steeped in history. Begin with a visit to Stuart’s Opera House, which is part of the Nelsonville Historic District. It’s a beautifully restored theater that puts on more than 75 live performance events each year, and has a history dating back to 1879. Between 1879 and 1924 the opera house was the place to come for vaudeville, melodrama and minstrel shows. But the theater closed in 1924 when the coal-mining industry began to collapse, and sat vacant until a non-profit group brought it back to life, first in 1977 for a three year stint before a fire nearly destroyed the building in 1980; and then in 1997, when it re-opened as its current incarnation, which now hosts regional, national and internationally acclaimed theater and musical performances.

Stroll around the Historic Public Square next, where the sidewalks are lined with blocks of beautiful star bricks from Nelsonville’s glazed brick-making days in the 1870s and a landmark fountain. The square is also home to more than a dozen art galleries and shops selling some of Ohio’s most unique products. Many of the shops are arts focused and offer classes to bring out your inner ceramics goddess or painter. My mom, Everett and I had a great time browsing, and even purchasing some beautiful star brick replicated ceramic gifts at The Emporium. Also on the square is Fullbrooks Cafe, where we paused for some fresh brewed coffee, warm soup and a home made sandwich.

After we’d finished on with the square we headed over to the Rocky Boots Outdoor Store, which has been selling footwear and outdoor gear since 1932. The shop began as a shoe factory during the Great Depression when brothers William (Bill) and F.M (Mike) Brooks moved their families from Columbus to Nelsonville in hopes of a better future. They ended up succeeding and the William Brooks Shoe Co. began. During its heyday the factory employed some 225 people and produced more than 2,000 pairs of boots per day. The factory supplied more than one million pairs of shoes and boots to soldiers fighting in WWII and the Korean War, and the company also built relationships with the top footwear retailers of the era – JCPenney, Kinney Shoe and Sears, Roebuck and Co. all stocked their shoes and boots. In 1979 the company decided to brand itself as Rocky, and today it remains a great place to shop for shoes and history.

After a half day of shopping it was time to do something Everett would enjoy and that meant riding the rails with the Hocking Valley Scenic Railway. The historic trains are run entirely by volunteers and depart from the Nelsonville Depot. The trips vary depending on the day and time of year, but all follow a scenic route. We tried the East Logan train, which is a two hour roundtrip ride that includes local history narration — we passed through Ohio’s last company town, one of the only remaining Hocking Canal locks and an active gravel mine, all the while marveling at the changing leaf colors on the trees.

Where To Stay: Ohio University Inn and Conference Center

This is Athens only full-service hotel, and features clean and comfortable rooms and suites with free WiFi.

Where to Eat: Casa Nueva

This cool worker-owned coop offers Mexican-inspired fare, including lots of vegan and gluten free choices, as well as live music and art show.

What to Eat: Stacked Enchiladas Inside Ohio University Inn, this restaurant does excellent steaks and seafood as well as some unexpected global options.

What to Eat: Moroccan Stewed Garbanzos