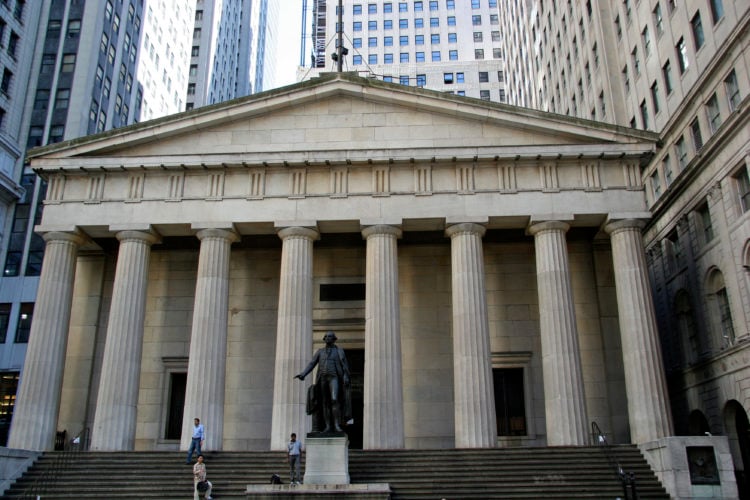 Whether you’re a permanent fixture in NYC, an out-of-towner on a day trip, or an international thrill seeker, the Federal Hall National Memorial should be on everyone’s to-do-list. The site is positively bursting at the seams with the history of America and the culture of New York City. From the inauguration of America’s first president to Barack Obama’s 2009 scolding of Wall Street’s elite, the National Memorial has seen it, done it, and made the T-shirt for you to buy on your way out. Best of all, it’s free (the entry, that is- the t-shirt you’ll need to buy). To find out more reasons to visit, keep reading.

When was the last time you had a great day out without spending a dime? If the answer is “too long ago to remember”, then all the more reason to take a trip to the Federal Hall National Memorial. Access to the memorial is 100% free, meaning you’ll be 100% free to have an awesome time without worrying what your bank balance will look like at the end of it.

2. It’s a great spot to soak up history

The memorial has been around for a LONG time: the structure that encompasses the Federal Hall National Monument was originally built between 1699 and 1703 as the first City Hall for New York City. In its time, it’s witnessed the trial and acquittal of John Peter Zenger in a case that would establish the right to a free press, and served as the site for the Congress of the Confederation during the American Revolution. Since it was remodeled in 1788, the hall has borne witness to the inauguration of multiple presidents, as well as the ratification of the Bill of Rights and the Judiciary Act. Where else can you soak up so much of the nation’s history in just one spot (and did I mention it’s free)?

You don’t have to be a Christian to be interested in bibles and you don’t have to be a patriot to be interested in George Washington. That said, god- fearing flag wavers are likely to get a big thrill from the next one on our list – the chance to see the very bible George Washington used during his inauguration to swear his oath of office. If that don’t impress you much, the many other Washington related artifacts and exhibits on display just might.

4. It’s the perfect place to start your visit to NYC

If you’re an out-of-towner visiting New York City for the first time, you might be feeling slightly overwhelmed. What to do, why to do it, when to do it- so many questions, and often so little time to find out the answers. If you want to get the very most from your trip, get things off to a flying start with a stop- off at the Discover New York Harbor Visitor Information Center. The center, which is housed within the facility, is a great place to pick up maps, tourist brochures and handy tips on the best nearby attractions.

Fancy a memento of your visit to NYC? Why not spend a few of those dollars you saved with the free entry by picking up a souvenir or two from the well-stocked (and not badly priced) museum store? Packed with books, multimedia and souvenirs relating to the history of the site and the American government, you’re sure to find at least a few things to pique your interest.

If you want to expand your mind, you’re in luck – the memorial offers plenty of guided and self-guided tours to take you through the history of the site and its role in the fight for American Independence. Guided tours are available on the hour and will take around 30 minutes. If you’re in a group of 10 plus, make sure to book in advance to avoid disappointment.

Who doesn’t love Martha Washington? While the memorial is very George Washington heavy, it thankfully hasn’t forgotten his wife, Martha. If you can’t get enough of America’s very First Lady, a visit to the New York Harbor Visitor Information Center should satisfy your hunger – in among its exhibit of Martha-related memento’s and trinkets is the very mourning ring the First Lady wore after the death of her husband… sad, but worth a peak all the same.

8. It showcases the trial of John Peter Zenger

If you’re not familiar with the monumental trial of John Peter Zenger, then shame on you. The trial of the publisher (and his eventual acquittal) would inspire our understanding of a free press and lead the way for the First Amendment to the Constitution: “Congress shall make no law respecting an establishment of religion, or prohibiting the free exercise thereof; or abridging the freedom of speech, or of the press; or the right of the people peaceably to assemble, and to petition the Government for a redress of grievances.” If that hasn’t inspired you, maybe a look at Zenger’s old printing press at the Memorial’s visitor center will.

9. Its exhibits are ever-changing

Some of the exhibits on display at the memorial are pretty permanent – George Washington’s bible, for example, has been on display ever since the inauguration itself. That said, the memorial doesn’t neglect the needs of repeat customers and regularly features temporary, pop- up exhibits to keep up us coming back for more. Seeing as we’re talking about exhibits, don’t be put off if you’re not into dead presidents and age-old court cases- yes, they’re featured, but if you’d rather something a little more up-to- date, the memorial has plenty to offer, with regular exhibits showcasing modern New York in all its sweaty, rainbow- colored glory.

10. It’s right in the heart of the action

If you want to follow-up your history with a dose of action, you’re in the right place. After you’ve spent a few hours wandering the memorial, you’ll find no shortage of other activities on offer right on the Memorial’s doorstep in Lower Manhattan. If you’re not sure where to start, the memorial visitor center offers a range of information on self- guided tours to help you out.