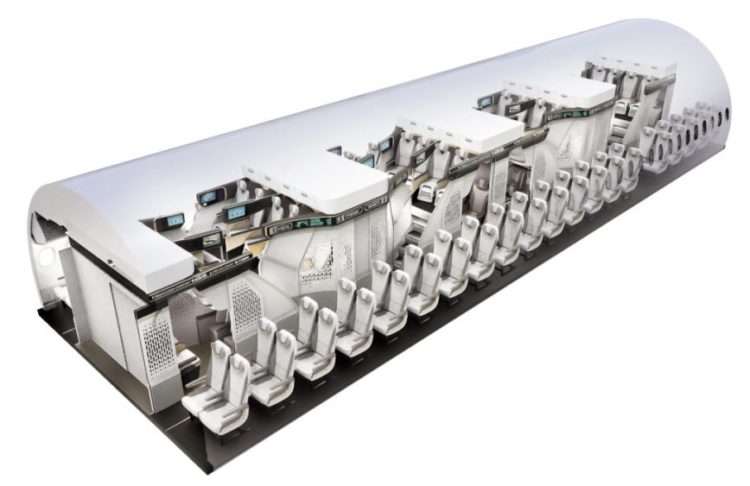 As airlines continue to work on airplane design to decrease fuel costs and increase flight speeds, there are a number of ideas flying around. In fact, there is actually an awards ceremony, the Crystal Cabin Awards, that encourages competition from several sectors of the airline industry to come up with innovative exterior and interior aircraft design. One of the award winners was a Korean student who proposed the concept of mixing First Class with Economy.

The basic concept is to design the interior to be more efficient with space, in part by combining the concept of a windowless exterior and using the newly acquired space to move some of the Economy rows along the windowless side. The First Class seating would be alongside, or in some cases, literally on top of the Economy rows to maximize the use of space. Of course, First Class would have their windows, and they would have partitions for privacy as is currently common in many First Class and Business Class sections.

In the end, the result of these rearranged passenger sections would be to maximize airline profit by potentially increasing seating capacity (mostly for Economy) and saving money on reduced fuel costs. There was not much attention paid to the customer end of the concept, which will be briefly discussed next.

For the customer financial end, there doesn’t seem to be much benefit from a physical seating perspective because as most Economy Frequent Flyers know, things are as about as small as they can be. Expanding the size of the Economy seat area will be financially counterproductive to the concept since it would fit the same number of passengers – or fewer. Airlines would make more profit without significantly improving the customer experience, hardly a reason for most passengers to get excited about.

We can complicate the situation more if a scenario occurs when a First Class passenger invites someone from across the Economy section for a sit down. That’s not allowed? Now we are starting to get into additional regulations and conditions for First Class passengers, an especially difficult problem when there are additional seats available after takeoff.

Finally, there is the space issue. Americans in particular love more space, and in this context it is interesting a non-Western designer created the concept. Anyone who has been to or just seen videos of Japan knows that space is a premium. Flying for 5 or 6 hours in a cramped space is not the preferred choice for most Americans. So while the concept may be viable for certain parts and destinations around the world, there definitely will be areas and locations that will avoid such airplanes like a captain avoids a bird strike.

As a basic design concept, the idea has potential. Putting First Class on top of Economy is an idea, but it just seems it’s like having to live in the bottom apartment of a two story building. The idea of privacy partitions to separate the classes, which will be the perception, has to be kept out of the design. As for the windowless exterior, not only do aircraft manufacturers have to buy into the idea, but there is the critical issue of passenger and aircraft safety that has to be addressed by the FAA and other international agencies.

One can only hope that the issue of passenger classes can be resolved to the benefit of everyone. As a matter of profit margin per plane, First Class seats are responsible for a fair amount of the per flight profit. So reducing the number of the higher priced seats will reduce the profit of the airline, resulting in rising costs for the Economy passengers. There must be a reason why airlines cannot strike a balance between having an aircraft specifically designed for only Economy passengers, and one for First Class passengers only. Perhaps that can be considered at the next Crystal Cabin Awards.