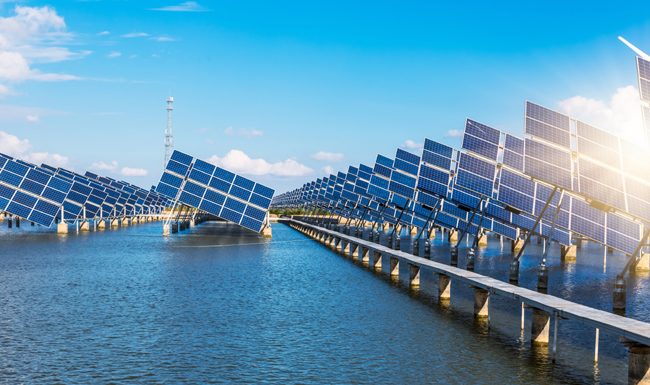 Like its name suggests, perovskite is a mineral found in the Ural Mountains of Russia that was named for the famous Russian mineralogist, Lev Perovski.  More specifically, it is a calcium titanium oxide mineral, meaning that its chemical formula is CaTiO3. However, it is important to note that the term “perovskite crystal” is sometimes used to refer to other materials that share the same crystal structure as perovskite rather than that particular oxide mineral, with examples including but not limited to bridgmanite and loparite.

How Are Perovskite Crystals Used in Solar Cells?

Perovskite crystals are also important because they are expected to see extensive use in solar cells, which are the components of solar panels used to convert sunlight into electricity.  In part, this is because perovskite crystals can be produced in enormous numbers in exchange for less cost when compared to their counterparts; so much so that some people speculate that we will slather them onto all sorts of surfaces such as doors, windows, and roofs because of their flexible and lightweight nature. However, it should also be noted that perovskite crystals are expected to be able to convert more of the sunlight that comes into contact with them into electricity when compared to their counterparts, thus making them the obvious choice of material when it comes to solar cells.

With that said, it is important to note that perovskite crystals still have serious issues, which is why there is still so much focus on new techniques and technologies involving such materials rather than a shift to full-scale production. First and foremost, while perovskite crystals are expected to become one of the most efficient materials out there for converting sunlight into electricity, solar cells made using them still have a long way to go. Furthermore, perovskite crystals are know to suffer from rapid deterioration when exposed to high-moisture environments for prolonged periods of time, which is a serious weakness that will have to be either corrected or compensated for before they can start seeing extensive use in more humid climates. Summed up, while perovskite crystals have the potential to be chosen for the solar cells of the future, they still need some help getting there, which is where a wide range of researchers at a wide range of institutions step in.

Why Is Flipping Perovskite Crystals So Important for Their Use in Solar Cells?

Recently, researchers at Los Alamos National Laboratory, Northwestern University, and Rice University have come up with a new way to produce perovskite crystals for use in solar cells.  This new spin-casting process flips the perovskite crystals in the middle of their production, thus creating a new kind of two-dimensional rather than three-dimensional material, meaning that it is as thin as it can be because it consists of no more than a single layer of molecules rather than the standard layer after layer of molecules that make up most materials. Although this is not the first time that perovskite crystals have been turned into a two-dimensional material, this new spin-casting process is interesting in that it lets electrons flow down its length with minimal interference, which has resulted in a number of important improvements over its predecessors.

For example, the new two-dimensional material has an efficiency of 12 percent, which is an enormous step-up compared to its two-dimensional predecessor, which had an efficiency of 4.73 percent because of how the crystals were not aligned as perfectly as they could be. This figure is still short of its three-dimensional counterpart’s efficiency of more than 20 percent, commercial solar panels’ efficiency of around 24 percent, and the Shockley-Queisser limit of around 33.7 percent, but it is important to note that this new two-dimensional material still have the potential to be refined into something better. As a result, it is expected to become more and more efficient at converting sunlight into electricity in the future, which will make the difference when combined with the advantages that it has shown so far.

In short, the materials used for solar cells have to undergo stress tests for the sources of stress that they can expect to encounter in the course of their use. For example, moisture is one such source of stress, but so are light and heat, which are similar in that they have been known to cause serious damage to a wide range of materials with sufficient exposure. This is the single biggest weakness shown by perovskite crystals in its traditional form as a three-dimensional material, which makes it critical that perovskite crystals in this new two-dimensional form have already proven to be more resilient even at this early stage.

What Are the Potential Consequences?

If the researchers interested in perovskite crystals can continue increasing their efficiency as well as their reliability under the standard conditions of their eventual use in solar cells without increasing their costs by too much, it seems probable that they will see widespread use in the next generation of solar panels because of their combination of advantages. The number of ifs can make this prospect seem improbable, but it should be noted that perovskite crystals are famous for the unprecedented rate at which researchers have managed to increase their efficiency. Combined with the fact that this new two-dimensional material is showing potential when it comes to their reliability as well, the eventual use of perovskite crystals in commercial solar panels is much less improbable than it seems on initial inspection.

In turn, when solar panels become not just cheaper but also more efficient at doing what they are supposed to do, it seems probable that this will convince more and more consumers as well as more and more businesses will start to use them, thus lowering their consumption of electricity and perhaps providing some of the excess to the power grid. This is particularly true because perovskite crystals are both thin and flexible, meaning that they will be usable in ways that previous materials could not be used, which should result in some rather interesting innovative designs down the road.