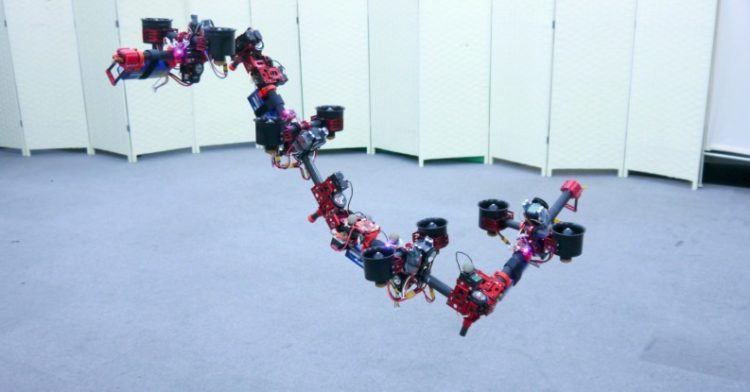 Advancements in the field of robotics has been exponential in the last few years, and many believe that we’re beginning to truly get a glimpse of what the future could look like with robots around and part of our daily lives. One of the most recent developments in the field combines drone technology along with classic robotics to produce a flying robot.

Its creators from the JSK Lab at the University of Tokyo lovingly call this flying robot DRAGON. DRAGON is a great acronym for quite a mouthful of a name for the actual tech, which spells out to be Dual-rotor embedded multilink Robot with the Ability of multi-deGree-of-freedom aerial transformatiON. The most impressive capability of the flying robot has been captured on video and released online recently. The robot has the ability to change shape while flying. It’s not all for show either. The point of it all is to be able to navigate to some of the tightest spaces in an indoor setting.

DRAGON uses a total of four modules, which are linked together by batter-powered hinged joints. Each of these modules has two maneuverable fan thrusters. These thrusters do a lot of the work of shape shifting, but it’s the brains of the operation that ultimately makes it all happen. DRAGON uses an Intel Euclid system as its brain and eyes. The flying robot has the ability to capture what’s around it and freely decide what shape it would need to adopt in order to fit in through a specific navigational space.

Drones and navigation has risen in popularity in the last few years with many commercial products allowing consumers a different vantage point when taking photographs or videos. In common commercial use, it has been popularized this way to capture aerial shots that have been previously impossible without the use of an aircraft. However, most drone navigation has been mainly performed outdoors. The open space gives drones and their controllers a larger margin of error and space to navigate easier.

Perhaps this has been the biggest challenge of indoor drone navigation. Tight spaces are the ultimate enemy; and while many of us might not have immediate use for drones inside our homes or offices or any other establishment, indoor drone navigation has many benefits and implications when it comes to a broader sense. Think about how much indoor drones could help people during catastrophes and rescue missions. Drones could be used to search collapsed buildings or be sent into areas that have been overtaken by fire. Drones could also be used to scout areas that have been exposed to toxic gases or materials. Truly, the list could go on and on.

However at the moment, DRAGON is the top of the game. And while it has shown impressive promise with its ability to change shape mid-flight, there’s still much to be done in order to get this robot to a position where it could actually provide substantial assistance when it is needed.

Currently, DRAGON has the ability to remain airborne for only three minutes. That’s not very long in terms of life-saving capacities, but it does have agility and power on its side. The developers at the JSK Lab knows exactly where to take DRAGON next and the steps they would need to conclude in order to get there. Their plans are big, but they’re all achievable in a close timeframe. DRAGON currently has four modules, and the developers want to increase that number to twelve. It also needs to be able to pick up and move objects, so the next plan of action after increasing the modules is to give DRAGON grippers at both ends of the system. The grippers would have to be designed, developed, and tried to see if they would work.

There’s still much to be done before we could actually see a viable indoor drone option, but for now, DRAGON has breathed fire into this study, fueling further research and development. The results shouldn’t be too far off, as long as the researchers continue to go at the pace they’ve been going. The future of flying robots may be closer than we ever imagined it to be. As a matter of fact, it’s already here.