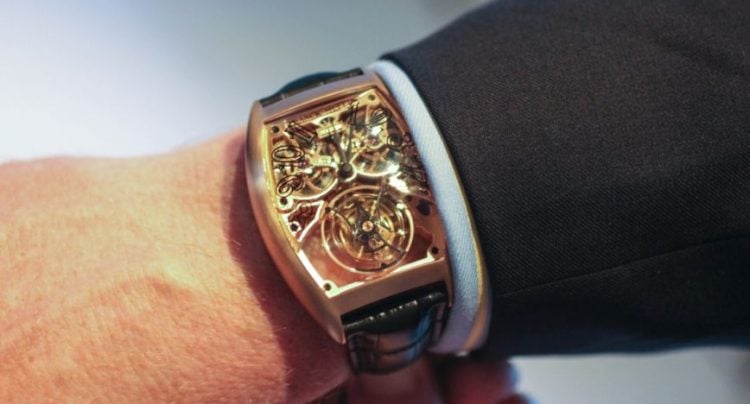 Some of the most famous watchmakers in the world have been around for many, many years. Franck Muller is no exception, but he’s relatively young in comparison to many of the other famous Swiss Watchmakers in the game. He was born in 1958 – a year before my parents, so hearing me call him young will make my mother’s year – and at only 58, he’s already made a name for himself as one of the most prolific watchmakers of all time. He founded his design house in 1991, making it a quarter century old, but that doesn’t mean he’s not right up there with some of the most famous brands in the world.

Franck Muller is the kind of impressive man we all look up to, too. He knew what he wanted to do with his life as a child, and he enrolled in watchmaking school at only 15 (can we just be honest here and point out we didn’t even know there was such thing? Is it like Swiss boarding school? Can my kids go?) and began working as someone who repaired high-end watches. His talent was too big for that job (first world problem, right?) and he eventually made the decision to branch out on his own and now he’s a worldwide superstar with a brand new watch we all need to “watch” out for – pun intended. Allow me to introduce you to the Thunderbolt Tourbillon. This is the most beautiful Franck Muller watch you’ll come across, and you will never mistake it for any other. This watch was born in 1984 – partially – when Franck Muller decided it was time to design his own special brand of Tourbillon. It’s not an easy timepiece to create, and that was a time when no one else was in the market for making one save for the most prolific watchmakers of all time. However, he made the decision to create his own, and that is in part where the Thunderbolt Tourbillon was born.

Private clients began requesting custom pieces that allowed the watchmaker to step outside his comfort zone, creating more and more custom watches that grew his business substantially. He knew it was time to create something even more brilliant, and he began working on the concept of the Thunderbolt Tourbillon. It is one of the fastest, most notable watches in the world – and it’s everything that his high-end clientele look for. By now the world knows that Franck Muller is a watch designer extraordinaire. You don’t get to work with the most famous, the wealthiest and the most important people in the world without actually doing stellar and magnificent work, which means that it’s time to focus on what’s important – the features. The most notable is the face. It’s unlike any other with its gold curved shape and a skeleton-like face. With four barrels, the watch has eight days of power reserve, and it also has the most impressive tourbillon in existence.

The tourbillon on this watch is more impressive than any other in the world. This watch features a tourbillon that completes a full rotation – or revolution – in a solid five seconds. Other tourbillon watches in the high-end category similar to this one take more like 60 seconds to revolutionize. How he managed to cut a full 55 seconds off that time frame is a mystery to us, but it’s impressive nonetheless. It’s the fastest watch in the world, and that by itself makes it the most impressive watch in the world; there is simply nothing with which to compare this watch. The design for this watch is complicated and very secretive. No watchmaker with such skill and talent – and world record setting watch – wants to share his secrets. For that reason, most can only speculate how this watch was created. We have no idea what it is that makes it possible for the tourbillon to move so quickly and so impressively, but we do know that the watch itself was made by hand. Each piece of metal, each curve and each fine detail was painstakingly crafted by hand to reach the most exceptional levels of perfection.

The old saying is that perfection does not exist, but it can be argued that it very well might with this watch. While the design details and creation are largely secret, we can tell you that this watch was not designed to do anything short of impress. As Franck Muller works hard to provide custom pieces for his very important clientele, there are likely many more of these in the works at the moment being customized for those who want the distinction of having the best of the best. Additionally, even if we could tell you how it was made, not one of us would really understand to complexities.

Franck Muller watches range from several thousand dollars to tens of thousands of dollars. The perfect and detailed designs take many hours to create; they are not manufactured with machines and mass produced. The Thunderbolt Tourbillon is not listed for sale online by the watchmaker on his personal site, or on any of the sites that are authorized dealers of this particular watch. However, after ample research, it’s come to my attention that this watch is just so exclusive you’re not getting that many details about it.

Our best estimated would be somewhere over $2.7 million, though it’s been mentioned by several watch enthusiasts that the watch is actually around $25,000 less expensive than Franck Muller’s Giga Tourbillon, but there are many price points for that particular watch. We can tell you this; if you have to ask the price of this watch, you cannot afford it. Leave it to those with deep pockets and no budget to do their shopping since it’s going to take a special kind of buyer to order one of his or her own from this luxury watchmaker in Switzerland. Prices will vary based simply on the fact that this is a watch many will want to customize to their own specifications.

What Is An Irrevocable Trust, And Do You Need One?
Aviation Boats Food & Drink Hotels Restaurants Yachts