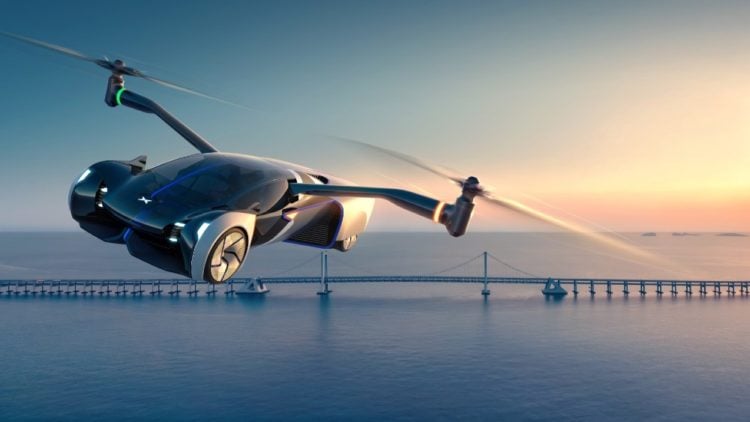 The futuristic vehicles you read about in your science-fiction novels may soon become a reality. HT Aero is predicting the release of a new flying sportscar that is slated for release in 2024. It’s not that far away. If you’ve fantasized about soaring over traffic jams during rush hour, your dreams may come true. The rumor is that we may see a street-legal flying car in our lifetime. Here’s what we know so far.

CNBC reports that HT Aero, an affiliate company of the Chinese giant Xpeng, has developed a new form of transportation. The vehicle is capable of flying through the air, but it is also designed to drive on roads. When we first read the brief on this new concept car, it blew us away. The new vehicle features a lightweight construction with a rotor that can fold up to convert it into a car that is legal to drive on public streets. Xpeng is driving the concept of a dual-purpose vehicle to new levels.

Xpeng is a Chinese electric vehicle company. Its headquarters is situated in Guangzhou. The company issued a press release that stated the flying car is completed in its concept form. It will come fully loaded with numerous safety features for road and airways, including parachutes. This piqued our interest and stimulated a volley of questions about the proposal. The concept car has been tested but it’s believed that the last design will undergo significant changes before production.

Xpeng supplies financial backing for the new project. HT Aero has secured more than $500 million from venture capital investors to fund the project. The new vehicle will be capable of conversion from a street-legal sports car to a helicopter. The conversion process from a car to a helicopter will be easy. It happens by pushing a button, according to the Robb Report.

HT Aero nor Xpeng have released many details about the new flying car concept. The companies revealed that so far, HT Aero has developed five variants of the vehicle that they refer to as a multi-copter eVTOL. It’s far more than a dream or a white paper, as they’ve already built the prototypes. There is confirmation that the vehicles made over 15,000 test flights. The new vehicle will carry up to two passengers. They claim the maximum road speed to be 80 miles per hour. The power system can sustain this speed for as long as 35 minutes continuously. The vehicle will be a quadcopter with road car capabilities.

I there a name for the new flying concept car?

The only name that we’ve seen associated with the new flying car is multi-copter eVTOL. It’s unclear if the new vehicle will have a formal title or a nickname. HT Aero still has a few years to work out the fine details. They have announced the new flying car with a video that gives the world a preview of its capability. It’s like something you’d expect to see on “Transformers” with its fold-up rotors that convert it into a car. Who would have imagined that you could push a button and turn your sports car into a helicopter?

What is Xpeng’s role?

Xpeng has only been in operation for seven years. It builds electric cars in China, but it’s now successful with an estimated annual revenue of $2 billion in USD, according to New Atlas. Xpeng is supporting the development of the new concept vehicle with finances. Xpeng grew and expanded its operations quickly from its inception to the present. It is now shipping out approximately 50,000 vehicles, some of which have a better range than the Model 3 produced by rival Tesla. Xpeng envisions a new form of transportation in the classification of urban air mobility. So far, fundraising for this endeavor has surpassed half a billion dollars in one round of fundraising.

Is this the beginning of a new mode of commuter travel?

The first thing that came to our mind is the obstacles that HT Aero is likely to encounter. Who wouldn’t want to own a car that can fly? We’ve seen the intense issues experienced by the makers of autonomous vehicles. They ran across strict safety regulations and limitations on testing their autonomous vehicles on public roads. The government must practice due diligence to protect the public from new technologies that are not yet proven. We’ve already seen a few failures in the safety track records for autonomous vehicles, but what would we be dealing with if people were to fly their cars around the neighborhoods? How would that even work?

The new HT Aero flying concept car is something that many of us have dreamed about for years. The implications for changing the way we commute are immense. We have many questions that the announcement confirming the flying car has spurred will arrive by 2024. Xpeng has eked out a few juicy details about the vehicle, but just enough to pique interest from the public. We know nothing about the design or how the new mode of transportation might even work. How will they introduce it to the public? Is it going to happen? Questions about the cost, the regulations, training to operate a flying car, and required permits are just the tip of the iceberg. We’re living at an exciting time in the history of humankind. Technology is taking us in new directions. Perhaps the fantasy stories we read as children were more prophetic tales alluding to the future. We hope to learn more about China’s new flying sports car as HT Aero comes closer to the scheduled production deadlines. We fully expect to hear more in the months to come and perhaps get some answers to the hundreds of questions going through our minds.

The Five Most Expensive Telescopes in the World

20 Hawaiian Beaches You Must Visit

Where to Get the Best Indian Food in Omaha