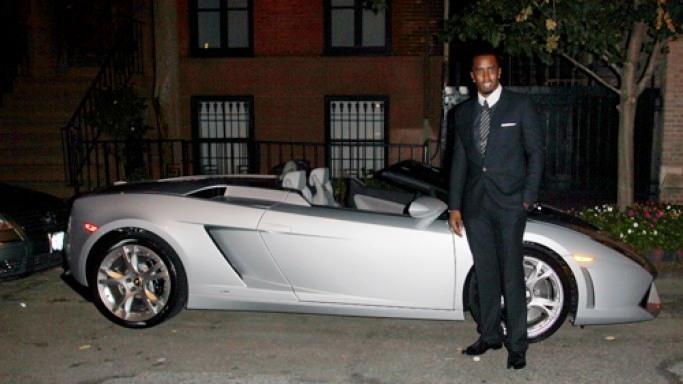 Sean John Combs, who goes by the stage names, P. Diddy, Puff Daddy, and Diddy, is one of the most recognizable and most famous names in rap music. He is a singer, songwriter, record producer, actor, entrepreneur and philanthropist. He is a legacy in the music industry, earning several Grammys through the years, as well as seeing his debut album go platinum seven times. P. Diddy has an incredible net worth that has been said to be approximately $820 million, according to Forbes’ reporting from this year. P. Diddy’s net worth isn’t all music related. He also started his own clothing line, designed his own brand of fragrances for men and women, helped develop a brand of Vodka, has played roles in different feature films and television shows, among other business ventures. With a fortune this big, it’s hard not to have a lavish lifestyle, and he does. One of P. Diddy’s biggest investments and his pride and joy, is his enormous car collection. He owns some of the most expensive automobiles available, and he doesn’t hesitate to show them off. Scroll down to take a peek at some of P. Diddy’s favorite automobiles from his personal car collection. The Phantom Drophead Coupe is a handmade, British luxury automobile, manufactured by Rolls Royce. The car debuted in 2007 and is currently the most expensive versions of the Rolls Royce line, selling for $443,000. P. Diddy owns a white Phantom Drophead Coupe with avant-garde interior and wood veneering that was inspired by the sport of yachting. The car seats four and sports two, backward opening doors. Combs can often be seen on the road in his RR and is one of his favorite of his collection. The Lamborghini Gallardo Spyder was introduced in 2003 and released in 2004. Today it is one of the most popular models for the car brand, Lamborghini and was named after a line of prized fighting bulls. The supercar that gives you a 5.2 liter V10 engine with six-speed transmission, is just one of Combs’ mega-line of cars that he owns and has been seen tooling around town in. He owns a silver version of the $300,000 Spyder, and gave his white Gallardo Spyder to the infamous pop singer, Justin Bieber for his 16th birthday in 2010. A concept car, known as the Benz Maybach, was first introduced back in 1997 at the Tokyo Motor Show. The car was designed after the Mercedes S-Class and eventually two models were released, the Maybach 62 and the Maybach 57. P. Diddy is the owner of one of the 57 models, which was designed with a 5.5 liter V-12 engine and five-speed automatic transmission. This particular car in his collection, was given to his son for his 16th birthday, and not only did he get the car, but he got a chauffeur to go with it. It has been said that the elaborate gift was given for his son’s achievement of being an honor student. Unfortunately, the $360,000 car wound up in an accident when it was hit by a Rolls Royce Phantom outside of a nightclub. P. Diddy isn’t always all about elegance in his auto choices. He’s still a guy and likes to have a little fun with his cars, too, which is where his stark white, Jeep Wrangler Unlimited edition comes into play. He has been seen cruising around town in Los Angeles in his Jeep, at times, with the doors removed and loaded with his buddies and playing his music loudly. It is unclear how much he paid for his Wrangler, but you can be sure, it is loaded to the max and at the top of the price-line. P. Diddy’s 1958 Corvette is said to be his personal favorite of his car collection. He owns a red and white version of the model and is an unremarkable restoration that he boasts can get anyone a date when driving the car with the top down and when driven slow enough. Diddy likes to show off his pride and joy, and has often been seen driving the pristine ’58 Corvette around town, as well as he’s made many appearances at different car shows with the favorited sports car. This car is worth $110,000. It may not cost as much as other vehicles he has in his collection, but it seems to have more value in other ways, to the famous hip hopper.

When you are one of the richest people in the world with hundreds of millions of dollars, you can afford just about anything you want, including a large car collection with some of the most expensive automobiles ever made. Sean Combs’ car collection is a direct reflection of his net worth in that it is a wide range of luxury, exotic, and rare, one-of-a-kind vehicles that only one with the kind of money Combs has, could afford. The above automobiles are just five of the hip hop artist’s extensive car collection, but they are the ones that he is most notable for being seen out-and-about in, and some of his favorites.