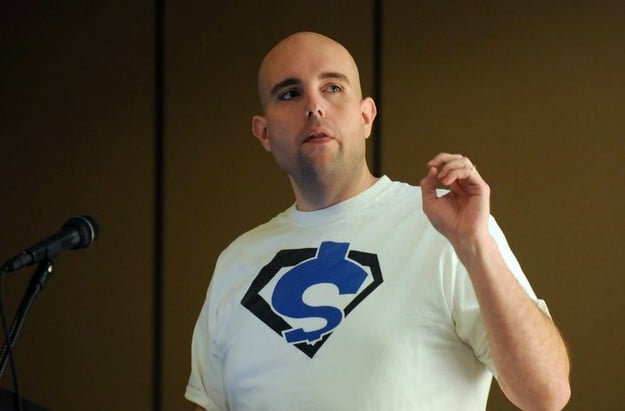 If you do work online, have your own business, or are familiar with the term “affiliate marketing” then chances are you’ve heard the name Jeremy Schoemaker.  He’s one of the most successful online gurus and has been making a living online for nearly 20 years.  What began from college has grown into a multi-million dollar business where Jeremy now lends help to businesses, advice to aspiring entrepreneurs, and even appears on TV once in a while to wax his chest (we’ll get to that).

This is his full bio from Wikipedia:

Jeremy “ShoeMoney” Schoemaker is a web entrepreneur, founder of NextPimp.com, ShoeMoney Media and PAR Program, and co-founder of the AuctionAds service.He is a frequent speaker at search engine marketing and affiliate conferences.  He also co-founded the Elite Retreat, an annual industry expert conference, with Lee Dodd. Slate stated on October 1, 2008 that blogger Shoemoney had become famous when he posted his picture with a Google $132,994.97 check for one month of clicks. Schoemaker lives with his wife and two children in Lincoln, Nebraska.

While in attendance at Western Illinois University, Schoemaker founded his first business, making Macintosh gaming sites. At its peak, NextPimp.com saw an average of 150,000 unique views per day. Schoemaker also started his blog, ShoeMoney, in 2003, in which he journals about how to make a living from the Internet, including direct ad sales and affiliate marketing. ShoeMoney’s blog was named Best Affiliate Marketing Blog of 2006 by Search Engine Journal. In 2010, Schoemaker won Fast Company’s Influence Project, getting more than 500,000 clicks by tapping into his online followers .

In March 2007, Schoemaker and his business partner David Dellanave launched AuctionAds, an eBay affiliate service that allows users to display live eBay auctions on their websites. The service was named the “eBay Most Innovative Application-Buyer” at the 6th annual eBay Developers Conference. In July 2007, Schoemaker sold his majority ownership in AuctionAds to the performance marketing company MediaWhiz for 17 million dollars.

Luckily Jeremy took the time to sit down with us for a full interview and we wanted to share 10 things that stuck out to us most. 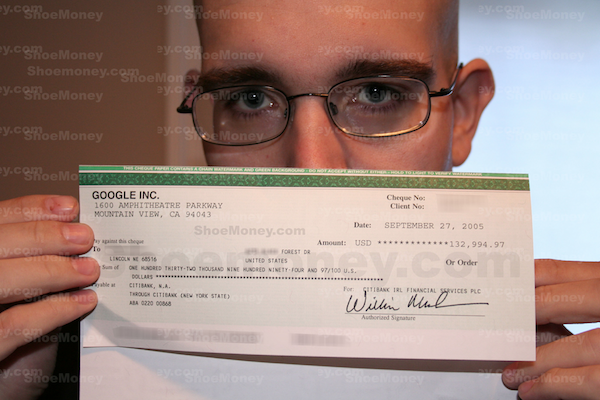 1. Misperception about his Massive Adsense check

Many of you might remember when Jeremy’s massive Adsense check for nearly $140,000 was publicized and went viral on Slate.com.   Many people didn’t believe the photo was real.  Today even less people believe it’s real because Adsense checks no longer exist.  But here’s the real deal.  The check was/is real and Jeremy has actually gotten checks and payments much larger than the $140,000 amount (we cannot disclose these amounts).  What other people also don’t know is that this picture of the check is actually 3 years late.  Yup.  It was posted 3 years after it actually happened so Jeremy was actually doing more business at the time of publication.  But this check most certainly put Jeremy on the map as a force to be reckoned with in the online world.

2. His philosophy on work, being an entrepreneur

Like many other successful entrepreneurs Jeremy has an obsession for his craft.  In fact he told us that when he has an idea for a venture that he’s excited about, that it consumes him.  In fact it’s difficult for him to focus on anything else.  And by consumes we mean 24/7, not just some part of the day, but ALL of the day.  Also, when it comes to the particular work he’s doing, Jeremy finds he’s most successful when it’s something he believes in, no matter how grim the prospects.  He’s found that more times than most when it’s a project he truly is excited about, if he’s worked on it long enough and hard enough it will be financially successful in the end.

Direct quote “you’re willing to work your a** off.”   Don’t even think of being in business with Jeremy it can’t take a phone call at 3AM to discuss ANYTHING about ANYTHING.  Know this going in.

Jeremy and some friends appeared on Bravo’s Below Deck and well, let’s just say things got a little crazy.  He says he’ll probably go on the boat again if he can round up another crew.  Jeremy mentioned it was a once in a lifetime experience that everyone should try at least once.  Unfortunately you’re looking at a minimum of $8500 a head to be on one of the nicer charter yachts out there will film crews capturing the entire experience.

5. He’s no different than you or me only he has more money

One thing I took out of this interview is that Jeremy is like all of us.  He didn’t take things for granted.  He works out of small office in Omaha, Nebraska.  He’s not over an the top, “crazy rich guy attitude” type of guy.  Jeremy is down to earth.  Tells it like it is.  When he mentions dollars and cents, while it’s often times in the millions, it’s to make a point, not to boast.  I respected the hell out of that.

OK there were some instances money was mentioned.  My favorite was the story of his new Corvette.  I’d rather not post it here unless Jeremy gives us permission.

7. He’s a Trump Supporter but there’s a catch

During the entire interview Jeremy wore a “Make America Great Again” shirt and even asked me prior to the interview if it was OK.  I told him it was fine.  While we briefly got into a political discussion Jeremy was 100% rational in his thoughts.  Despite the fact he and I voted on different candidates, it didn’t bother me in the least because his argument was 100% sane and he took full responsibility.  Given his online influence, Jeremy may have swayed quite a few people in his efforts campaigning for Trump.  However, he told me that should Trump waffle on some of the issues he and his supporters hold dear, that he’d be the first in line to protest these positions.

Honestly, a little bit of everything.  Jeremy’s spent many years in the trenches that he can be more selective and have a bit more fun in the business.  He does some consulting for businesses, speaking engagements, and of course, still works on original ideas.

9. You can talk to him as long as you don’t waste his time

He, above many people believe in the importance of time, and not wasting it.  I could tell instantly that Jeremy does not like to waste his time or other people’s time.  If you plan on engaging in discussion with Jeremy, make sure it’s meaningful.

Jeremy lived a “Dotcom” life during his earlier years of online success.  He admitted to spending a lot of money on lavish items and experiences.  However, he’s over 40 now, has two daughters, a wife, a home, and just doesn’t have the time to live that life anymore.  He seems as if he’s made peace with it and is ready for whatever challenge comes next.