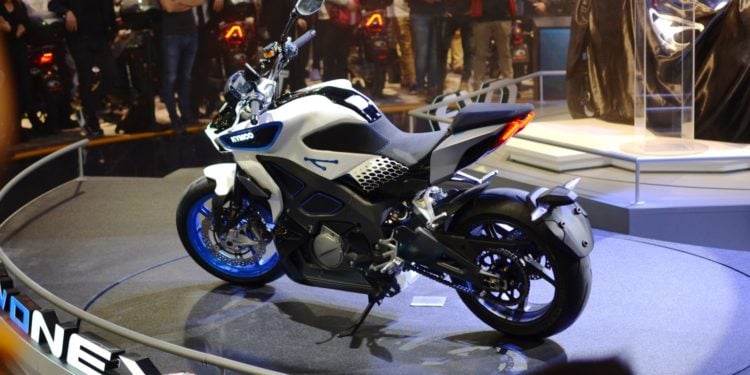 The human/machine connection is the philosophy which has driven the designers at Kymco to craft a unique machine, the Kymco RevoNEX Electric. While much of the information on this electric bike is still being kept under wraps by Kymco, we have been allowed in to see some imagery, basic specs and reviews. Info on such components as the battery, however, are still being closely guarded. But we do know this, that when it was unveiled at the 2019 EICMA, it was surrounded by crowds of eager motorcycle enthusiasts, craving for information on this creation. What truly makes this bike unique is the frame of mind held by the designers. For them, it was a poetic expression of how a rider connects with their bike–a design specifically created to enhance and/or awaken the spiritual, poetic, and passion of the rider/machine connection. In point of fact, Kymco even describes its riding modes as “personalities”.

In 2019, the Taiwanese company Kymco unveiled a prototype for an electric motorcycle at EICMA, in Milan. It was an immediate sensation with those in attendance. Sleek and stylish, the six-speed RevoNEX has been designed to specifically attract bikers used to traditional fuel powered machines,  more so than those who are simply looking for an eco-friendly commuting bike.

2. Kymco’s Revolutionary Design Strives to Keep the RevoNEX as Close to a Gas Powered Machine As Possible

Let’s face it, one of the reasons that most motorcycle enthusiasts shy away from the electric motorcycle is the perceived absence of “umph”, so to speak. Traditionally, electric motorbikes are silent, have no real “revving”, and for many seasoned motorcyclists, feel like nothing but a toddlers toy. Kymco knew this and worked to create a bike where every component functioned like a traditional fuel powered motorcycle. The only difference would be the source of power would be electric, and not gas.

if you’re like most of us, when someone mentions “electric bike” an image of a scooter comes to mind. However, the 2021 Kymco RevoNEX Electric is anything but. According to test runs, the Kymco RevoNEX Electric can go from zero to 62 mph in just 3.9 seconds, and reach speeds up to 127 mph in around 11.8 seconds, with acceleration courtesy of it’s 6-speed manual gearbox.

A truly modern bike in every sense of the word, the 2021 Kymco RevoNex Electric includes a software package called FEP, or Full Engagement Performance. This software package contains some pretty sweet electronic rider aids, such as ABS and traction control. FEP provides both new and seasoned riders with the best possible experiences, such as its Launch Control where every launch is a perfect one. Its Electric Traction Control sensors pick up uneven terrain, and automatically makes the appropriate adjustments so there is no wheel slippage. Even in braking, the FEP steps up to the plate, protecting riders from unexpected rear wheel lifts.

The fact that the Kymco RevoNEX Electric has chosen to equip their electric motorcycle with Metzeler Racetec RR Tires, means you’ll be getting a superior ride in every sense of the word. Racetec RR tires are made specifically to give you the best grip possible, no matter the road conditions. Developed by using a variety of select polymers and resins, both front and rear tires provide you with a stable and secure ride, in both high and low temperatures.

6. Kymco Believes that Shifting on a Motorcycle is Part of the Experience

One may not expect to see shifting on an electric bike, but the designers at Kymco disagree. For them, the act of shifting is part of the overall experience of motorcycling, and see it as part of the “art” of riding. As such, the designers set to work to include an advanced, six speed transmission, as they believe this enhances the ‘feel’ of riding a traditional, fuel powered bike. Riders are free to decide on their own gear changes in response to the terrain they are currently on.

As previously stated, one thing that Kymco didn’t skimp on, were state-of-the-art electronics. Here, their Adaptive Machine Personality, or AMP refers to their collection of power modes, and the names of these modes are as unique as the RevoNEX itself: Poised, Bold, Extreme and Assertive. Just the names given these modes imparts a feeling of adventure and futuristic design. Poised refers to an easy going, quiet ride, Assertive for powerful rides, Bold for fast and adventurous rides, and Extreme brings forth the riders passions.

Not only is Kymco withholding information regarding the battery and other components, it’s also holding back on specific braking and suspension details. However, astute motorcycle enthusiasts have examined images and deduced that the braking power and suspension will be supplied by two of the best OEM suppliers on the market today: Brembo and Ohlins. From what we know, Ohlins will supply the suspension needs for both front and rear, while Brembo will supply radially mounted, monoblock brake calipers for the front.

Another element in the Kymco bag of surprises for their bike, EFT refers to Electric Full-Range Acceleration. EFA refers to their believe that perfect acceleration should convey the same experience to the rider, as completing a thought. Again, Kymco is waxing poetic, but that’s a huge part of the unique charm of the 2021 Kymco RevoNEX Electric. In effect, the entire experience is meant to connect the rider to the machine, opening up an entirely new frontier in rider experiences.

10. The Active Acoustic Motor or AAM

Again, Kymco relies on the spirituality each ride the RevoNEX provides to describe its components. Here, Kymco is referring to the bikes powerplant, as the Active Acoustic Motor, or AAM. It may be best for Kymco to explain it, “The motor is designed with a multi-frequency acoustics generator that enhances the native sound of the motor. Combining the resonating sound of AAM with the mechanical sound of the transmission, the acoustic note of RevoNex has profound depth and complexity. It conveys the heartbeats of the bike and communicates the load condition of the motor; it gives the rider situation awareness.”