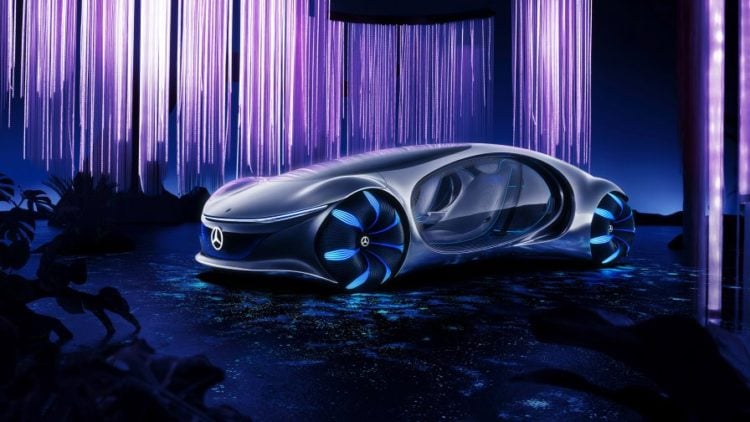 Auto shows are the to-go events for car enthusiasts as they showcase new technologies and concepts that will dictate the future of the industry. One such occasion that came to pass was the CES 2020 best car tech showcase. The show was stacked and featured several concept cars that will hopefully grace our roads in a few years. Just like the previous shows, there was a high leaning point towards electric-run engines, promising lower consumption, the same to emissions. One car that seemed to attract massive attention was the Mercedes Vision Avatar. Unique looks and remarkable technology are its best adjectives.

The Mercedes AVTR design borrows heavily from the science fiction movie, Avatar. It is a joint project by Mercedes with some input from James Cameron, the director behind the film as evident from the entertainment website, The Verge Slick is the best word to describe the site of the car on the podium at the auto show. In the same manner, like many cars on such showcases focusing on the future, it features smooth edges. The edging is a move, most probably looking at the aerodynamics feature for smooth movement. Going overboard with the design is an expectation, and Mercedes tried that with the Mercedes–Benz vision AVTR concept with the inclusion of ‘scales.’ The scales or bionic flaps in technological terms are for communication to the outside world. Though it seems quite outlandish, it is a foundation for a bearing to maximize on this functionality aspect. Another standout feature is the wheels, which take inspiration from the seeds of the tree of souls from the 2009 movie. The movement of the wheels provides a broad movement scope, which sees the car move sideways or diagonally. It is a new idea in the automobile sector to keep tabs on.

A look at Mercedes Benz’s official site you get an idea of how impressive this concept car is when weighing its performance. As earlier hinted, it is an electric drive and features a powerful battery boasting of a fantastic voltage. Still, on the battery, it is graphene-based and comes in handy in environmental conservation measures due to its 100% recyclability. The recharge time for the battery is also exceptionally low, and the 1200Wh/liter takes roughly 15 minutes to charge fully. With a full charge, it can go roughly 700 kilometers to have another recharge. It is a good move focusing on efficiency on the road. The communication scales or bionic flaps also come in handy in providing additional solar energy to power certain components of the car.

The Interior And Control The exterior look is congruent to the interior when it comes to perception. When you get inside the car, you will hardly get disappointed by the wonder that awaits you. The interior design focuses on passenger comfort and safety, with a two-person seating capacity. It lacks a steering wheel, a feature several concept cars are banking on to minimize human activity, working on the comfort aspect. The seats and whole interior are unique, and it features color-changing fabric. Depending on the amount and intensity of light, the fabric color changes to various shades of blue, creating the perfect ambiance. With environmental conservation measures being a key consideration, the seats are made of Dinamica leather. It is a material that ups conservatory measures starting from its production to the environmentally friendly end product. Other components come from recycled materials such as plastic bottles and old clothing. The proper integration of the material translates to a decent level of comfort when in the car.

Many concept cars try to make the operation of the vehicles a simple affair with many changes and upgrades coming up at each show. The autonomous nature of the car eliminates the need for a steering wheel. Focusing on independent control, there is a controller appearing as an oval console. When you place your hands on the console, it captures your heart rate and breathing pace, bringing a machine-human merge situation. The system recognizes the driver through his biometrics and creates a sense of environmental awareness when driving. The neuronal energy flow for integration plays a vital role in the control of the vehicle, which is a fantastic innovation to anticipate.

Impact Of The Mercedes Avatar Concept

The Mercedes-Benz vision AVTR concept car brings a lot to the table when you look at the technology it incorporates to bring insight to the future. One thing that you note when in contact with the car is the artistic and innovation freedom. Though it leans more on the experimental side, there is much freedom on the designers’ part to fit in several features for both functionalities and also to take on the futuristic appearance. An interesting part is the input of James Cameron, the figure behind the Avatar movie. The film inspires the car’s make, and he played a vital role in the overall idea of the vehicle. It spells a future in the design of vehicles, where there is vast incorporation of ideas to make the end product stand out. The creation will probably inspire other automakers, with a focus on the features both interior and exterior. The intuitive control is one of the most amazing ideas that Mercedes Benz has come up with, and it is a wish for many for the concept to develop. The CES auto show had a lot to offer in terms of game-changing automobile technological notions. One of the striking podiums had to be that of Mercedes Benz with its Avatar inspired car that brought light to future inclinations towards electricity as the primary fuel. With a slick make, the car is a looker and goes the extra mile to show how much freedom its makers had when coming up with its idea. Standout features include the wheels, which allow for both sideways and diagonal movement. The intuitive control creates a human-machine connection, taking note of your heart rate and breathing pace to generate the neuronal energy channels. The Mercedes vision AVTR is a car to anticipate for hoping its conceptualization into production to be a matter of when rather than if.