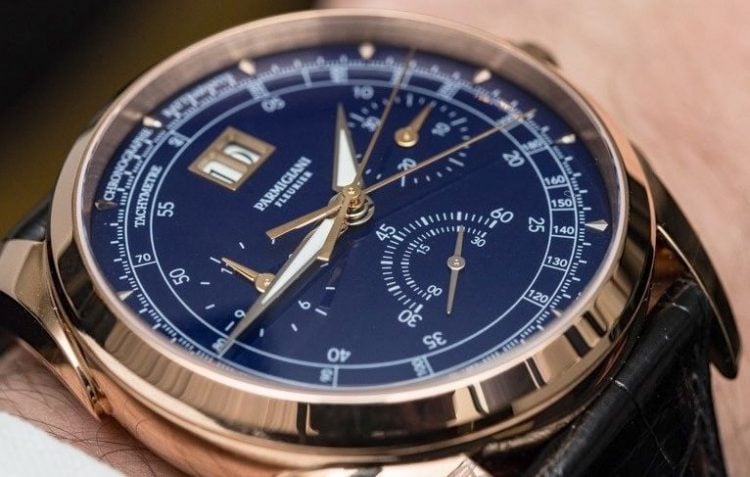 When new company starts up with their own brand of watch, they already know the competition is there for exquisitely designed and high performance timepieces. Still, brands come on the scene that interest and entice watch enthusiasts and customers alike to take a closer look. One company that began its journey into the world of watches and other time pieces is Parmigiani Fleurier. In the time it has been around, it has earned its name as one of the most well respected names in watchmaking.

Parmigiani has not only impressed his customers and watch enthusiasts with his creations, but major names in the watch world around the globe. One of his most popular watches, the Tondo Chronor, has just been introduced as an anniversary watch, this past year, 2016. It is truly one of the most elegant watches you will see on a man’s wrist, and rightly so, it has gotten quite a bit of attention from other brands.

The cohesive chronograph is by far, one of the most refine complications that can be created. Kinematics is the basis of the watches’ chain of actions mechanisms that sets off one, then triggers the next. Each sequence of action is accurately synched and adjusted so that the movement moves effortlessly and to perfection. One tiniest flaw or upset in the chain, can set off an effect that will knock the entire movement off and unbalance the watches’ perfect function.

The watch was designed with a hand wound movement. The movement includes a chronograph, a split-second function as well as a large date and sit on the same main plate. There is no additional module. Parmigiani designed the watch using the house caliber PF361 features and cutting-edge technology. These features include A 5 Hertz movement that produces 36,000 vibrations per hour, column wheels that replace a cam, a vertical clutch as opposed to a horizontal one, and a “cock” balance that is held by a transverse bridge rather than a single point of attachment for added security. All of these features give the watch impeccable accuracy, stability and reliability to the movement so that the watch wearer knows his time is always accurate. Parmigiani didn’t stop there, the Tonda Chronor Anniversaire watch’s energy is driven by an 18K rose gold caliber. This adds to the prestige and elegance of the watch that already boasts of style and sophistication. 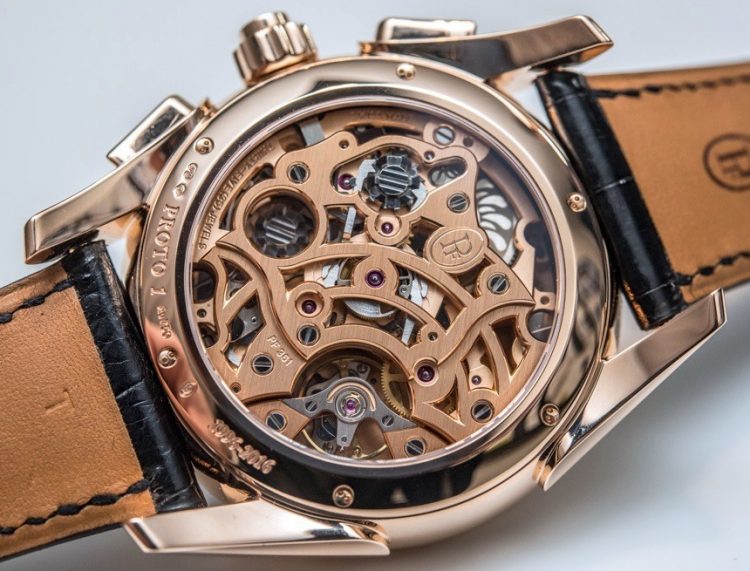 The dials and case

The “grand feu” enamel technique was used for the Tonda Chronor Anniversaire, giving it both blue and white dials that most certainly add to the superb craftsmanship and the lavishness of the watch. It is a look that stands out among others, which is a great appeal to many watch lovers and enthusiasts – subtle but very much an eye-catcher and conversation starter.

The watch is presented in a 42.1 mm x 14.6 mm, completely polished case. It is water-resistant up to 30m and sports a 7.2 mm crown. The back of the case has been engraved with a number that gives it is individual identity. The hands of the watch were thoughtfully designed in rose gold in Delta-shaped hands and a luminescent coating for easy-to-read at a glance. They are subtle, yet distinctly different for both character of the watch and functionality.

One distinctive style-marker Parmigiani included on the face are the brightly polished, 18K gold faceted hour indices. They stand out against the background of the face of the dial in a unique and eloquent way. Another feature on the face of the watch are the chronograph minute, seconds and tachymeter scales that sit just inside the hour chapter ring. They are all in black and were added to the face during what is known as the enamel-dial production process.

A small, double-sided seconds hand was placed at the six o’clock mark that rotates continuously and at the 9 and 3 o’clock mark, the 12-hour and 30-minute chronograph counters were set. Another facial feature is the large, double aperture date display set at the 12 o’clock mark. It stands out nicely against the rest of the delicate features of the face which makes it easy to read at a glance.

Choose your design and strap

This watch is available in four designs: a white gold case and white dial, a white gold case and blue dial, rose gold case with blue dial, and a rose gold case with white dial. This gives consumers multiple choices to choose from to match their taste and style. The watches are also fitted with either a black or brown Hermes alligator leather strap, as well as an Ardillon buckle that matches the case. Each version is a limited edition with only 25 pieces of each version available.

You won’t find a more sleek, luxurious and finely sculpted watch with such impeccable detail to everything from the movement to the intricate details of the face. The anniversaire version of the Tonda Chronograph by Parmigiani Fleurier is definitely a watch to look into if you love exquisite watches that make a statement without being overly stated. 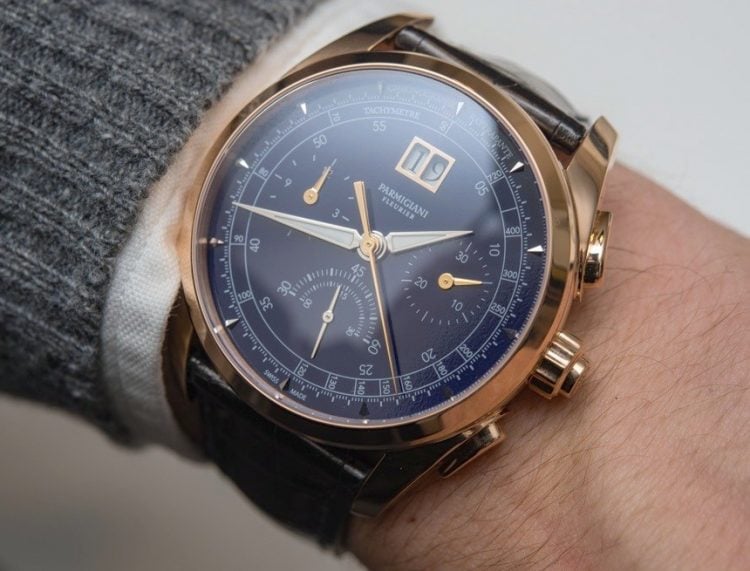 Michel Parmiagiani had a special knack for making table clocks and other timepieces for collectors, primarily. His family acknowledged his talent and in 1999, he broadened his knowledge and skill to designing and producing his first wrist watch, the Kalpa Hebdomadaire. It was designed with an iconic tonneau shape movement, as well as an 8-day power reserve and it ended up representing the brand’s first component miniaturization, which then divulged the strong need for manufacturing the brand.

Over the years, more entities joined together to find a way to manufacture each detailed piece that went into making Parmiagiani’s watches; from the tiniest gear wheel to the uniquely shaped cases. Now that they were established, they began producing their own, unique brand and in 2010, the Bugatti Super Sport was presented, and later in 2011, the Hegirian Calendar watch which relays lunar cycles of the Muslim calendar. It is an extremely complex mechanism that does not need the slightest manual correction. Parmiagiani’s knowledge of watch mechanisms seemed to be unsurpassed as he’s developed piece after piece that shows an impressive eye for detail and intricacy, and a love for creating the unusual.

In 2016, Parmigiani presented the Tonda Chronor Anniversaire which is the first integrated chronograph. As of today, this brand boasts of 33 movements that all have been manufactured within their own watchmaking center. Other brands recognize the significance of this accomplishment, because in 20 years of being in business, it is more of an achievement than other brands have accomplished in more than a century of watchmaking. Despite this remarkable feat, Parmigiani is not done creating. He continues to impress the watchmaking world with his unique designs and movements that prove he has a true art for watchmaking.

The Top Five Watch Designs of 2016

The Top Five Cartier Watches of 2016