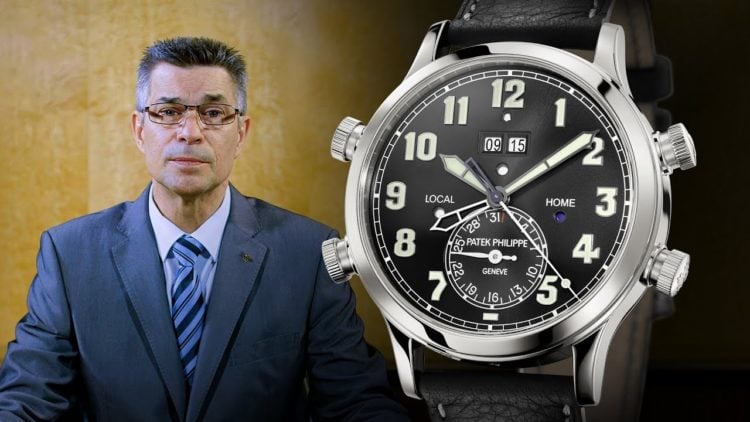 The famed luxury watchmaker Patek Philippe has produced a watch that has become a topic of a bit of controversy. They’ve made a few changes that have caught the eye of brand enthusiasts and collectors and they’re not yet sure how they feel about outside of the box design from Patek Philippe. The example we’re referring to is the Patek Philippe Ref 5520P-001. To familiarize you with the interesting points of this exquisite timepiece, here are 10 things you probably didn’t know about the Patek Philippe Ref. 5520P-001 Alarm Travel Time Watch.

1. Collectors aren’t sure about it yet

The 5520P-001 comes with a unique feature that is definitely something new for Patek Philippe. This example is crafted with four crowns/pushers which is a bit out of the box for the brand. They make this model stand out uniquely, as they are good sized and they lend a distinct appearance the likes of which have never before been seen from Patek Philippe. It’s thrown a few collectors who don’t quite know how they feel about it yet.

2. This watch is powered by a new movement

Another feature that distinguishes the 5530P-001 is the movement. Patek Philippe didn’t just piggyback off of a sibling in the line to power the complications of this version of the Alarm Travel Time watch. They created a brand new movement to celebrate this unique new creation. They dubbed it the calibre AL 30-660 S C FUS. It was made just for this watch.

3. The movement was engineered for a slim profile

Patek Philippe designers were of the mind to keep this iteration of the Travel Time as thin as possible. Engineers were tasked with the development of a movement that would display two time zones, remain ultra-slim, provide an alarm module, and apply an intuitive and logical approach. This resulted in a grand Complication that meets all of the objectives and it even includes a mechanism that is relatively safe from owners who tend to activate pushers at the wrong time.

4. There are 4 patents pending for the mechanisms

Patek Philippe’s executives are so proud of the new movement that they’ve applied for four patents on the new and advanced timekeeping technology. The four areas that this original creation are unique and eligible for patent protection are the anti-backlash mechanism that programs the alarm time, the alarm logic functions, the digital arm display, and the alarm winding deactivation technology.

The Patek Philippe Ref 5520P-001 is among the best choices for luxury watch enthusiasts who travel in-between time zones. This watch is not only lovely to gaze upon, but it’s also highly functional. The dual time zone complication is referred to as the “travel time system.” It offers a 24-hour alarm mechanism with a hammer that strikes on a gong for a classic alarm. It keeps you on track with the time from two different time zones.

6. The dial is unique

Now we come to the dial. At first glance, the ebony black sunburst offers an excellent background for the applied gold numerals. They show up within daytime and the luminescent coating gives them illumination when the lighting environment is low. The alarm time is displayed in the aperture just below the 12 o’clock position, which is another eccentricity of the design. The logo has been moved to just above the 6 o’clock position which might take a bit of getting used to. The sweeping second’s hand adds a classic touch.

7. The case is exquisite

The case is nothing short of a masterpiece in design. It’s made of platinum material and measures 42.2 mm in diameter and 11.6 mm in depth. What we love about this special case is that it is interchangeable with a full back and a sapphire crystal case back to show the delicate and intricate workings of the movement beneath from the rear view of the watch. The front of the dial is covered with a sapphire crystal. The watch is water-resistant to 30 meters.

8. It took years to develop the movement

Patek Philippe ordered the development of the calibre AL 30-660 S C FUS movement five years before it would find its way into the central workings of the new Alarm Travel Time watch. This was a labor of love and dedication to get the technology and details just right. When finished, this Grand Complication presented a total of 572 parts with 52 jewels, a central rotor made of 21K gold, a Gyromax balance a Spiromax balance spring, a power reserve between 42-hours to 52 hours and unidirectional winding with the Hallmark Patek Philippe seal.

The 5520P has taken inspiration from the 5524 Pilot Travel Time. The complications are the same with the main exception of the added alarm. This new complication resulted in another useful feature, and it also required a place on the dial. This is how the manufacturer made the decision to move the logo from its longstanding position under 12 o’clock to its new home just above 6 o’clock. For some, it’s a small detail but for others who are purists, it’s a bit unsettling. Alarm Travel Time is a variant that shows how the brand is evolving.

While most will agree that alarms on luxury watches are generally annoying with the buzzing or high pitched squeal, that’s not the case with the Alarm Travel Time. It’s a far classier version that lends a gong-like chime that is struck with a hammer, giving it a more pleasant tone. The other revolutionary aspect of this alarm system is that it’s tastefully located for a lovely aesthetic. It’s not only functional but it’s impressive and that sets it apart from the crowd.