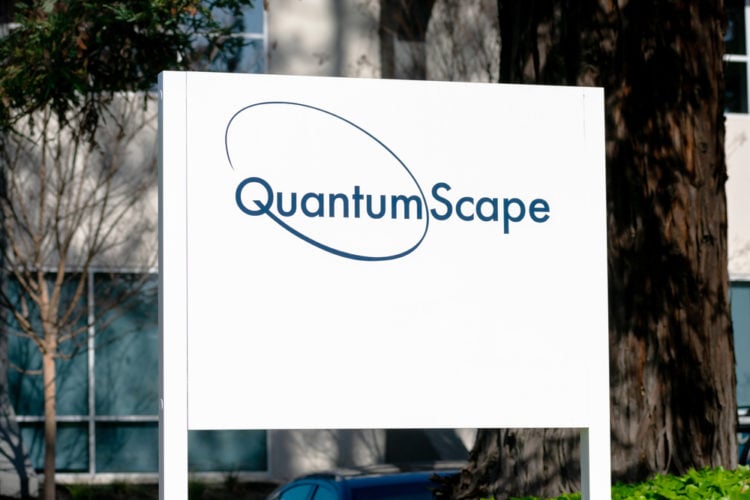 QuantumScape is a company that has received a lot of attention in recent months. For those who are curious, it is a company that is researching solid state lithium metal batteries meant for use in electric vehicles. This is important because these batteries promise to be better than their predecessors in a number of ways. For example, they are supposed to be more energy-dense. Similarly, they can be charged faster. On top of this, solid state lithium metal batteries are supposed to be lower cost, safer to use, and longer-lasting than otherwise possible. Combined, this makes them the clear choice compared to their predecessors. Of course, the issue is that solid state lithium metal batteries are far from being ready to hit the market. The concept is there. However, the batteries aren’t there at this point in time. This is the reason that QuantumScape is still researching rather than either making revenues off of its product or getting ready to make revenues off of its product. As for why this is so important, well, suffice to say that there is considerable interest in electric vehicles. After all, while much progress has been made on the technologies that enable electric vehicles, there is still much more progress that can be made. As such, if QuantumScape can launch a battery that can do everything that solid state lithium metal batteries are supposed to be capable of doing, it stands to make enormous amounts of money from electric vehicle manufacturers. This is particularly true because electric vehicles are expected to become more and more common in the times to come, not least because of the push to reduce greenhouse gas emissions for the purpose of reducing the impact of climate change as much as possible.

Why Has QuantumScape Become Notable?

There has been considerable hype for QuantumScape in recent months, so much so that it wouldn’t be an exaggeration to say that it is one of the more prominent companies pursuing solid state lithium metal batteries out there. This has been reinforced by the various parties that have taken an interest in its progress. Something that the company isn’t hesitant to boast about. To name some examples, Bill Gates, Volkswagen, and Stanford University are all involved in one way or another. Having said that, it is important to note that QuantumScape is far from being ready to release its product. As such, it is difficult to say much of anything about its prospects in the long run, particularly when the public has so much less information than the company’s stakeholders. On top of this, it is important to note that there have been dissentors regarding QuantumScape’s future prospects. In short, Scorpion Capital released a report in April of 2021 that outright called the company a “pump and dump SPAC scam.” Moreover, it compared the company unfavorably with Theranos, which is a pretty serious insult considering that is the company that went from $10 billion valuation at its peak in 2013 and 2014 to defunct in September of 2018. Something that happened because its supposed wonder-product of extremely convenient blood tests was based on false claims and nothing but false claims. Under those circumstances, it should come as no surprise to learn that Scorpion Capital made an effort to back up its condemnation. It says that it interviewed past employees at the company, experts on the subject of solid state batteries, and employees in Volkswagen’s efforts involving batteries for electric vehicles. Based on that, Scorpion Capital stated that QuantumScape didn’t have much substance to back up its hype, which has resulted in serious skepticism within its own ranks about its supposed product. The report didn’t sink the company altogether, but it definitely did some damage at the time.

Speaking bluntly, there is no real way to say for sure whether QuantumScape will prove to be a good long-term investment or not. If interested individuals choose to get involved at this point in time, they are betting that the company will eventually be able to make good on its promises, which would presumably send its stock price skyrocketing. Unfortunately, there are multiple problems with this idea. One, there is no guarantee that QuantumScape will be able to fulfill its promises. There are some very respected names willing to invest in it, but the thing about very respected names is that they tend to have a lot of resources to throw around, meaning that they can afford to take a lot more risks than most investors. Two, even if QuantumScape can fulfill its promises, there is still the matter of it being able to turn that into a profitable set of operations. This is particularly concerning because it is unclear when solid state lithium metal batteries will be ready to hit the market, which makes it difficult to compare this investment opportunity with the many other investment opportunities out there. Never mind the fact that there are also numerous other projects pursuing much the same goal, meaning a great deal of potential competition. Three, there is the fundamental issue that outsiders just don’t have a lot of information available to them. Something that makes investing that much riskier. Still, if someone manages to bet on the right company before it has entered into the revenue-making stage of its lifecycle, they stand to benefit enormously. As such, it might be a good idea for interested individuals to continue paying attention to QuantumScape to await further news. The more information that they have, the more capable they should be of making the decision that is most in-line with their best interests.