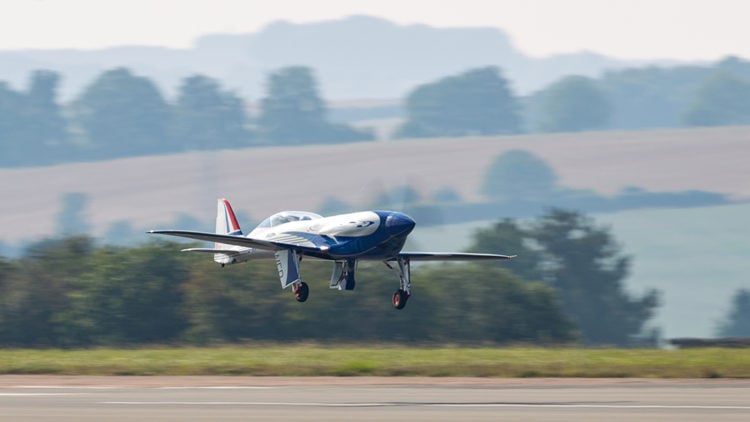 Electric planes are relatively new to the market, but they are gaining notice and popularity quickly like electric cars. Clean fuel sources are part of a worldwide trend away from fossil fuels. Naturally, every aviation business wants to get in on the new industry, and some, like Rolls-Royce PLC, want to be the best. Let’s take a closer look at Rolls-Royce’s new all-electric plane.

A New Twist On An Old Product

Electric planes are new, but Rolls-Royce PLC has been building for the aviation market for over a century. It may seem odd to associate a luxury car brand with flying, but this company produced its first airplane engine in 1915. Considering that Wilbur and Orville Wright made the first flights in human history on December seventeenth of 1903, that’s a very early start. According to Brittanica, the first Rolls-Royce aircraft engine produced in 1914 was a water-cooled Merlin engine called the Eagle. While we associate the name with high-end cars now, during WWII, it helped keep the allied troops in the sky. By the 1960’s jet engines were the companies’ biggest money maker. Aviation has always been a part of the Rolls-Royce brand, so it’s no surprise to see an e-plane.

For Rolls-Royce, the business of flight has always been vital, but it has not been a smooth path. Aviation once broke the company, and now it will take it into the future. Not all Rolls-Royce vehicles are made by the same company. Although it used to be a single entity, Rolls-Royce Motor Cars and Rolls-Royce PLC are now two distinct businesses. BMW actually owns Rolls-Royce Motor Car. The reason the car manufacturing and aviation departments split has to do with a contract in the early 1970s. Lockheed Martin and Rolls-Royce were supposed to collaborate on a jet, but Rolls-Royce could not complete the engine project due to calculation errors. It lost a fortune and ultimately had to declare bankruptcy in February of 1971. Regrettably, the bankruptcy eventually led to the sell-off of Rolls-Royce Motor Cars.

Though it’s normal to associate luxury cars with the name, these two divisions haven’t been part of the same company in decades. Fortunately, bankruptcy isn’t always the end of the line, and Rolls-Royce PLC has had numerous successes since the 1971 disaster. Besides building exceptional planes and engines, the next four or five decades saw Rolls-Royce rebuild and produce some fantastic engines. Unfortunately, things haven’t been going well for Rolls-Royce PLC during the pandemic. Last year the company posted a four-billion dollar loss amid the collapse in air travel and had to lay off over seven thousand employees. Cash raised from shareholders helped keep the company afloat during 2020, but Rolls-Royce PLC has indeed weathered a lot of turbulence. The new e-plane looks promising, and it may help pull the twice-endangered Rolls-Royce PLC out of the hole again. More importantly, the vaccine rollouts correspond with a serious uptick in scheduled flights, which means airlines and plane manufacturers should be able to realize more normal profit margins moving forward.

The Spirit of Innovation

In 2019 UK’s Aerospace Technology Institute introduced the Accelerating the Electrification of Flight (ACCEL) program. The Spirit of Innovation, Rolls-Royce’s new e-plane, was the only zero-emission plane included in the project, which is a little surprising given how fast the UK is working toward removing fossil fuels from its roads. Often, Rolls-Royce PLC partners with other companies and provides the engines for their aircraft. Other than the snafu with Lockheed-Martin, the company has a stellar history of producing aircraft engines. According to the RobbReport, “The company has partnered with Airbus and Siemens to develop the E-Fan X hybrid plane and with Aston Martin on its Volante Vision VTOL concept.” The British government provided part of the funding for the development of The Spirit of Innovation. At the time of the announcement, Rolls-Royce PLC stated that the goal was to create the fastest electric plane on the market. Given their past successes with jet engines, there’s no doubt this will be a swift flier. The current World Record holder is a Siemens plane that reached a top speed of 210 mph in 2017. Rolls-Royce PLC is shooting for an even three hundred. That’s faster than any car on the road. Currently, commercial airliners average around 460-575 mph (740-930 km/h) using old-fashioned fossil fuels. However, with the supply of oil dwindling every year, prohibitive costs and eventually a lack of fuel to go around makes the e-plane market an essential step forward.

Everything We Know About What’s Under The Hood

Rolls-Royce is working hard to help reach the ‘net zero’ goal to decarbonize. The Spirit of Innovation is Rolls-Royce’s contribution, but the company is also developing other technologies to help electric planes take off. According to a press release, the company says “We are focused on producing the technology breakthroughs society needs to decarbonize transport across air, land, and sea, and capture the economic opportunity of the transition to net zero.” The first flight of the Spirit of Ingenuity was a few days ago, September fifteenth5th. It took off from the UK Ministry of Defence’s Boscombe Down site at 14:56 (BST) and flew successfully for about fifteen minutes. The sleek, modern-looking plane is primarily white with red and blue details and sports an impressive 400kW (500+hp) electric powertrain. More importantly, Rolls-Royce calls the batteries “…the most power-dense battery pack ever assembled for an aircraft.” Sadly, they’ve kept most of the rest of its stats under wraps. However, it most likely hasn’t broken the speed record yet because it called the test flight a ‘step’ in that direction.

Rolls-Royce is committed to ensuring all of its products are Net Zero compliant within the next nine years. The Spirit of Innovation is the company’s first full-aircraft contribution to that clean air, zero fossil fuels initiative. Hopefully, we’ll be seeing and hearing a lot more about this future record holder soon.