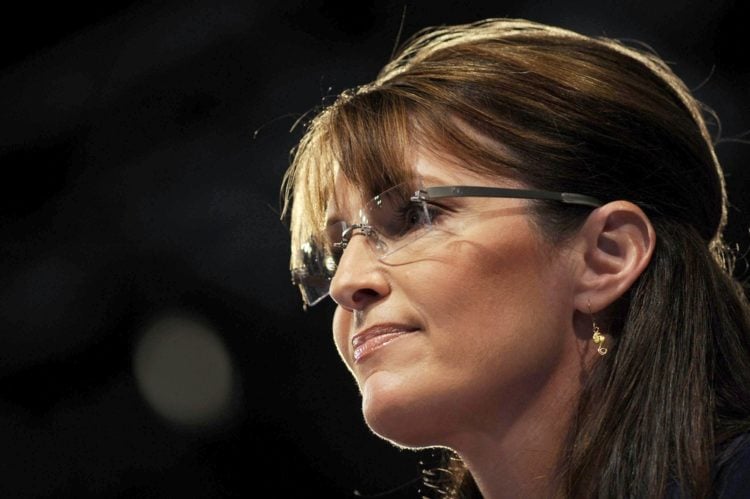 Sarah Palin came to international attention back in 2008 when she ran alongside presidential nominee John McCain as his Vice President. Since then, she’s become a best-selling author, a real estate magnate, and by all accounts, a very wealthy woman. According to Celebrity Net Worth, Palin is now worth the considerable sum of $8 million. How did the former Governor of Alaska come to such a huge amount of money? Stay tuned to find out.

Palin was born on February 11th of 1964 in Sandpoint, Idaho. As an infant, she and her family relocated to Alaska, where they eventually settled in Wasilla. At school, Palin was a good all-rounder: she played flute in the band, co-captained the basketball team, and competed on the cross country running team. In 1984, she earned the title of “Miss Congeniality” at the Miss Alaska pageant. After graduating high school, she enrolled at the University of Hawaii at Hilo. After transferring a few times, she eventually earned a bachelor’s degree in communication from the University of Alaska in 1987.

After graduating from the University of Alaska, Palin took the first steps in her professional career as a sportscaster. Shortly after, she married her high school sweetheart, Todd. After the couple welcomed their first child, Palin put her career on the back burner to concentrate on developing Todd’s fishing business.

From Mayor to Governor

Palin registered as a Republican in the early 1980s. By 1992, she’d decided it was time to take her political ambitions to the next level. She began her political journey by running for the Wasilla City Council. She proved successful. After 4 years on the council, she made an equally successful run for Mayor. By the turn of the millennium, Palin was ready to move to the next stage. Her bid to become lieutenant governor of Alaska failed, but it succeeded in making her a well-known figure in the party – something she used to her advantage 4 years later when she defeated incumbent Frank Murkowski to become the new Governor of Alaska. For the first few years of her tenure, Palin was popular with the electorate. However, after several controversies (including a state predator control program that allowed wolves to be hunted for a bounty and various ethical scandals) her popularity took a tumble. By the time of her resignation in 2009, her popularity stood at just 54%.

In 2007, Palin met up with some key conservative commentators. Among them was Bill Kristol. After becoming convinced Palin could help pull in support from the religious right-wing of the Republican party, he encouraged John McCain to choose her as his vice-presidential running mate. The subsequent campaign proved controversial. Palin came under intense scrutiny for her record, leading to some senior republicans calling her a political liability. Since then, analysts have been divided over just how much of an impact Palin had in deciding the outcome of the election. As Wikipedia comments, some studies have claimed that Palin cost McCain around 2% of the final vote share, while others have found no evidence of an adverse impact. Whichever side is right, one thing’s for sure: by the end of 2008, everyone knew exactly who Sarah Palin was.

In 2009, Palin resigned as Governor of Alaska. But she clearly had no plans on stepping quietly away from the public eye. That same year, she published her memoir, ‘Going Rogue: An American Life,’ which explored both her private and public life, as well as her resignation as Governor. At the time, interest in Palin was at an all-time high following the 2008 election campaign. Within less than two weeks of its release, over a million copies had been sold. Based on bestseller rankings, it compares favorably to the memories released by Barack Obama and Hilary Clinton. Buoyed by the success of her first publication, Palin released a second book, ‘America by Heart,’ the following year. It may not have been great literature, but it sold enough for publishers to commission her for two further books. The first of them, ‘Good Tidings and Great Joy: Protecting the Heart of Christmas,’ became an instant bestseller on its release in 2013, selling 209,591 copies within the year. The second, ‘Sweet Freedom: A Devotional’ (2015), consisted of 260 devotionals, all of which were based on biblical writings. The book received favorable reviews and even managed to win the endorsement of Donald Trump and Mark Levin.

The 2008 electoral campaign may not have won Palin the vice presidency, but it did win her notoriety. And if there’s one place where notoriety is celebrated more than most, it’s TV. In 2010, Palin was offered a spot as a political commenter with Fox News. According to Net Worth Post, she collected a very handsome salary of $1 million from the position. She eventually left the network in 2015. Other TV appearances have come by way of TLC’s ‘Sarah Palin’s Alaska’ in 2010–11, and ‘Amazing America with Sarah Palin’ on the Sportsman Channel in 2014–15. In 2014, she launched the short-lived online news network, the Sarah Palin Channel.

If there’s one thing that Palin and her husband seem to know how to do exceedingly well, it’s flip properties. Back in 2011, they splashed out $1.75 million for a six-bedroom home in Scottsdale, Arizona. 5 years later, they made a healthy return on their investment when they sold it for $2.275 million. In 2015, the couple spent just under $1 million on another property in Scottsdale. In 2019, they made a profit of $5.263 million when they sold it for $6.2 million. Their property portfolio doesn’t end there: according to Celebrity Net Worth, the couple also owns numerous other properties in Alaska.

Prior to 2008, Sarah Palin was a relatively unknown figure. Whatever you say about her now, you can’t say she’s unknown. The controversies surrounding her personal life and political record have kept her firmly in the spotlight. Whether you love her or loathe her, no one can say they aren’t just a little bit fascinated by her. Palin is the kind of figure that everyone has an opinion on. It’s why Fox News was happy to pay her a million-dollar salary as an analyst and why her books have topped the bestselling charts. It’s also how she’s managed to achieve a net worth of such grand proportions.