Home
Travel
Seven of the Coolest Places to Ice Skate in the U.S. 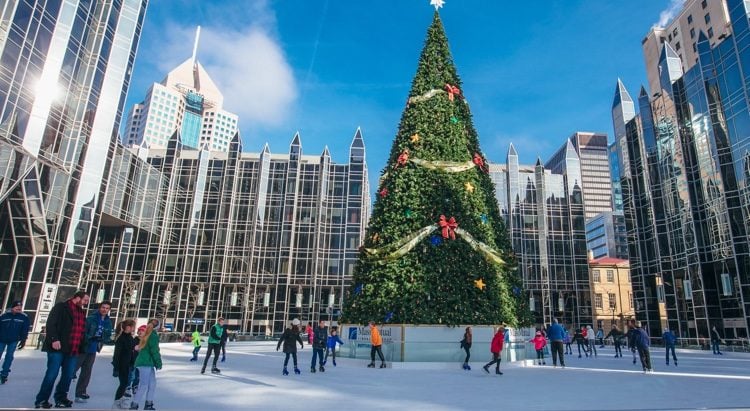 As the holiday season amps up, ice skating rinks are taking shape all across the U.S. One of the best, most festive ways to ring in the merry season, skating is a tradition celebrated in every part of the country, from cold climates to warm locales. Far beyond oval-shaped rinks streaming Christmas jingles, there are numerous unique destinations to seek out with your skates this year. From a new rooftop spot in Atlanta to a New Hampshire winter wonderland, here are the coolest places to ice skate in the U.S. 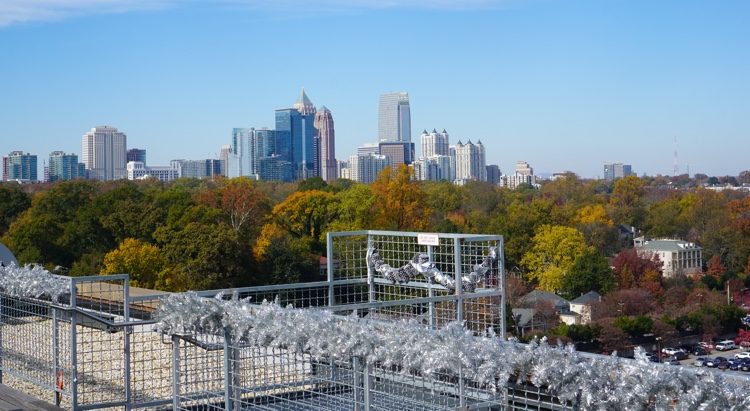 When most people think of ice skating, they envision colder, snowier settings, but just because Atlanta doesn’t typically get very wintry doesn’t mean the city can’t exceed expectations with one of the most stunning ice rinks in the country. New this year, The Roof at Ponce City Market has added “Skate the Sky,” branching off the Skyline Park with a stunning rink on the rooftop terrace. With expansive views of the Atlanta Beltline and Old Fourth Ward, it’s one of the few skating rinks that actually boasts an urban panorama. Open now through February 14, the covered rink boasts 3,500-sq.-ft. of ice, loads of holiday lights and decor and soulful food and drink specials like hot toddies. The rink costs $15 per person, inclusive of skate rentals and 50 minutes of skating. If ever there was a winter wonderland south of the North Pole, it’s Jackson, Wyoming. Surrounded by the snowy peaks of the Teton mountain range and filled with cozy lodges populated by skiers, it’s a frosty dreamscape during the winter months. Naturally, it’s a haven for serene ice skating, as at places like the Snake River Sporting Club, a private club situated on 800 acres with a unique (and apt) Western vibe. Positioned on the edge of the Bridger-Teton National Forest, the club contains cross-country skiing, sledding and of course, ice skating. The rink is nestled behind the Clubhouse and next to the sledding hill, with sprawling views of the river, forest and mountains. Peaceful and pristine, utterly surrounded by nature at its purest, the Snake River Sporting Club really captures the essence of the season. For those looking to hole up for the night, the club offers four furnished one-bedroom “tiny homes” in the Discovery Village, plus the more lavish Ranch Estates Sporting Cabin, which has two bedrooms and two bathrooms.

Located in the heart of downtown Pittsburgh, PPG Place gets into the holiday spirit with its lively ice rink. Open through February 25, the Mass Mutual Ice Rink is bigger and better than ever, having undergone a recent overhaul that included adding 25% more ice and 700 pairs of skates. It’s also 67% larger than the Rockefeller Center ice rink, one of the most iconic rinks in the country, giving it a huge leg up in the urban ice skating category. It’s got a huge Christmas tree in the middle and it’s surrounded by glistening buildings, providing quite a unique and dazzling ambience. Skate lessons are also available, and the rink features periodic “Skate With Santa Saturdays” throughout December, to up the ante on the festivities. When it comes to natural ice rinks, it’s hard to beat the immaculate Eclipse Lagoon in Rockford, Illinois. Rather than a manufactured, man-made oval rink, this one is actually a frozen lagoon in the middle of the Nicholas Conservatory & Gardens. It’s open through January typically, though that depends on weather and temperature, considering its all-natural. The free-to-skate rink is immersed in serene nature, bedecked with greenery and plants. For those who prefer a little more activity, hockey is available on the north end of the lagoon, and goals are provided on a first come, first served basis. Remember to BYO skates, as no rentals are provided on-site. It’s not very often you get the opportunity to ice skate on Olympic training grounds, which is what makes The Broadmoor World Arena Ice Hall so special. The Colorado Springs rink has served as a training center for generations of U.S. winter Olympic figure skaters, one of only two of its kind in the U.S., and the only one at 6,000-feet in elevation. While it’s still reserved largely for training, the rink is open to the public at limited times. The Ice Hall’s public portion is located alongside the 8,000-seat World Arena, which has famously hosted the likes of the Broadmoor Skating Club and multiple editions of Skate America. Still today, the Ice Hall hosts individual athletes and Olympians. 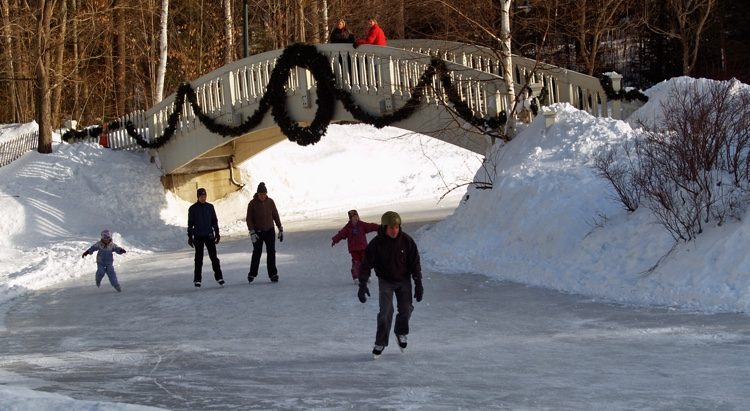 The closest thing to the North Pole without actually traversing the tundra, Nestlenook Farms in Jackson, New Hampshire, is like a fairy tale come true. The picture-perfect three-acre property is quaint and charming, especially with its Victorian ice skating park, which weaves around frozen Emerald Pond and under bridges lined with wreathes. Elsewhere on-site, Nestlenook offers snowshoeing, sleigh rides and a roaring fire and hot chocolate in the warming center. An iconic holiday centerpiece in Kansas City, the Crown Center’s Ice Terrace celebrates its 45th anniversary this season, as residents and visitors flock to the rink for some icy festivities. Open now through March 11, the rink features The Mayor’s Christmas Tree, a 100-foot Douglas fir fresh from Oregon and taller than both the White House and Rockefeller Center’s Christmas trees. Bedecked with 6,000 white lights, 1,200 red, gold and silver ball ornaments and 150 snowflakes and snowman ornaments, this is the Christmas tree to end all Christmas trees.