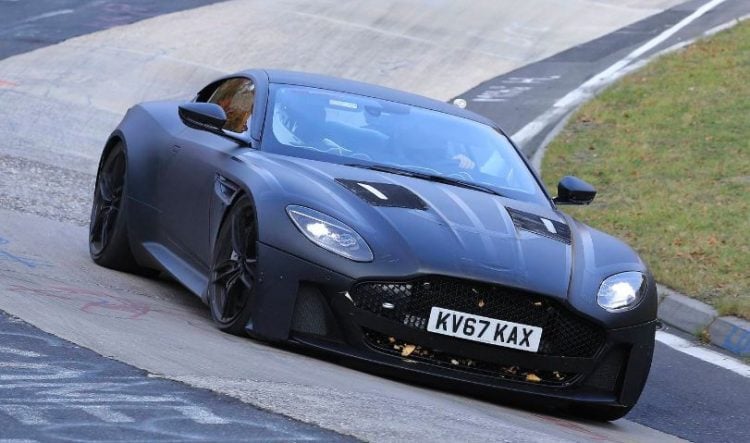 The Aston Martin automakers have been slick at hiding the new 2020 Aston Martin Vanquish from the public eye. No doubt, the rationale is that the more perfected prototype is being shielded from the public eye until it’s ready to make a grand appearance at the Geneva Motor Show, but we’re fortunate to have a glimpse of things to come as we enter the new year.

Spies are everywhere and it would take an underground track for testing the new auto in absolute secrecy. Spy shots give us at least an idea of what will be peaking on the horizon and tearing down the road for the 2020 Vanquish. Aston Martin has unveiled the redesigned Vantage but the next model in the Second Centruy plan is being closely guarded. They were tricky enough to through spy photogs off with a test mule that didn’t satisfy the need to know. Finally, a glimpse of the real deal which is currently under construction has been captured for a closer inspection and a lot of speculation.

Appearance of the prototype tester

The latest super GT has the appearance of the DB11, with a few major departures. Analysis of the spy shots shows a bigger grille when compared with the DB11, and there are differences in the front and rear lights as well. The hood is shorter and the tail is more upright. The new Vanquish will be lower to the ground, with larger wheels. You won’t see a dual tip exhaust because they’re replaced with rear quad exhaust tips which are an aesthetically pleasing upgrade.

We’re predicting that the new Vanquish will be modified with regard to performance which will include mods to the chassis and a crank up from the DB11 in suspension to enhance stability and traction with tweaks to the settings to the wheels, brakes and tires. Since we’ve already seen the bonded and extruded aluminum in the Vantage, we expect it to remain in a similar platform, perhaps with a new surprise or two. From what we can tell in viewing the photos, the new update will feature large carbon ceramic discs along with massive calipers. Greater control over performance settings with enhancements in the handling and feel are what we’re expecting.

Performance and speed are the name of the game in the latest trend in auto-making to break old records and set new ones. The stakes are high and the competition is fierce. While Aston Martin certainly has nothing to prove that it already hasn’t, there’s always room for improvement. It doesn’t hurt to create a new spark of enthusiasm. The 2020 Vanquish will be powered by the automaker’s twin turbocharged 5.2 liter V-12. We’re fully aware that it delivers 600 in horsepower for the DB11, but we know that they have a few tricks up their sleeves to squeeze a little more for the sake of posterity and positioning of the new GT. There is no forgetting that it’s up against the new 789 hp Ferrari 812 Superfast. Neither is it likely to concede to the superiority of the Bentley Continental GT Speed, nor the Mercedes AMG S65 Coupe, when it’s within their power to rise above the competition.

Andy Palmer, CEO of Aston Martin has dropped a few hints that suggest we may see a bit of hybridization taking place in the new Vanquish. Of course, it’s speculative and we’re not yet sure about the really good stuff that includes fuel consumption rates for a V-12, and how this can be modified to sip instead of guzzle. Nor do we yet have a sense of its ability in the zero to sixty sprint. More is expected to be known in the upcoming announcement and presentation of the new 2020 Aston Martin Vanquish, as early as later in 2018, or certainly by early in 2019. Do we really have to wait for the grand unveiling?

We’re also aware that the automakers are planning to create a Vanquish Volante featuring a convertible top. There are more coming out as well. Plan on seeing a new SUV in 2019, two Lagonda sedans, a 2020 supercar and a variety of limited edition models that would cause Pavlov’s dog to slobber. Exiting times are coming for Aston Martin fans.