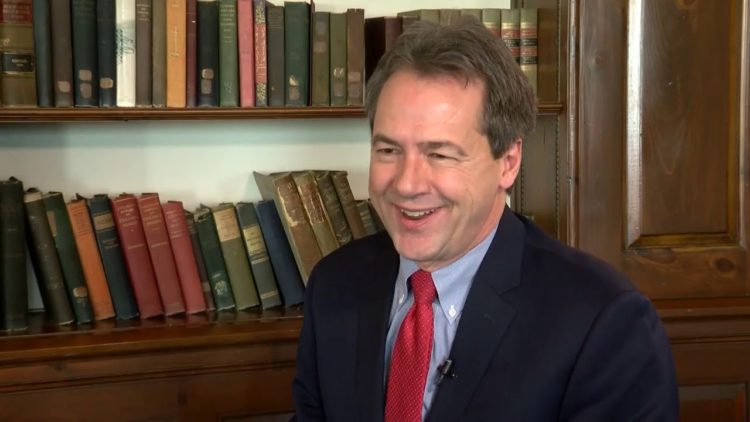 If you live in Montana, you’ll know Steve Bullock as the state’s 24th Governor. If you don’t, you’ll probably be familiar with him as one of the 2020 Democratic candidates for President of the United States. Since his campaign for president ended in ignominy, Bullock has re-grouped, re-assessed, and come back fighting as the Democratic candidate for the United States Senate in the 2020 election. Find out more with these ten little facts about the Montana Governor.

Bullock was born on April 11, 1966, in Missoula. After studying Politics, Philosophy, and Economics at Claremont McKenna College and law at Columbia Law School, he took the first steps of his career working as a legal counsel to Montana’s Secretary of State. After proving himself in the position, he was promoted to Assistant Attorney General and acting Chief Deputy Attorney General. After four years, he decided to advance his legal career further by entering private practice as a lawyer with law firm Steptoe & Johnson. In 2004, he returned to his native Montana, where he established his own law firm in Helena.

Bullock has been married to his long- term partner, Lisa Downs, since 1999. The couple share three children, Caroline, Alexandria, and Cameron. As written on Big Sky Words, rumors began circulating in 2016 that Bullock had been getting a little more friendly with Meg O’Leary, the Director of the Department of Commerce, than was befitting of a committed family man. Naturally enough, Bullock has always hotly denied any rumors of impropriety.

In 2008, Bullock ran as the Democratic nominee for Attorney General. After winning the election race against Republican Tim Fox with 52.64% of the vote, he went on to serve in the position until 2011 – the year he decided to take the next step in his political career by running for Governor. After a tense campaign, he took the election with 7,571 votes, or 48.9%, compared to Republican Rick Hill’s 47.3%.

4. Eyes on the Prize

The first sign that Bullock’s ambitions extended way beyond the state lines came in 2017, when he formed a PAC, Big Sky Values PAC, to fund travel around the country. At the same time, whispers started to emerge that he’d hired an Iowa communications staff. By 2019, the PAC had raised nearly $1.8 million and spent about $1.55 million. As Galia Slayen, a spokeswoman for Big Sky Values, told MTN, the PAC “enabled Governor Bullock to highlight his vision for the future.” The vision, as it turned out, was to be the next President of the United States.

After several years of rumors, Bullock officially announced his candidacy for the 2020 presidential election on May 14, 2019. During his announcement, Bullock made it clear that his priorities in running included facing off against political “dark money” and legislating against the Citizens United Supreme Court ruling. Despite seeming to have a clear path to success, the lack of media coverage received (something that could be blamed on his late entry to the race) left him vulnerable. Raising funds proved a huge challenge – one only surpassed by the challenge of raising votes. After consistently polling at less than 1% in nationwide polls, Bullock officially withdrew from the race on December 2, 2019.

Bullock’s presidential dreams may have bitten the dust, but it didn’t take him long to find a new one. On March 4, 2020, The New York Times confirmed what people had long suspected: Bullock would be pitting himself against Republican incumbent Steve Daines in Montana’s 2020 U.S. Senate election. Bullock himself had been denying the claims for months but was apparently convinced of the merit after a chat with Barak Obama and Senate Minority Leader Chuck Schumer, who’d made the unpreceded move of flying west to persuade Bullock in person. As soon as he made the news official, all but one of the existing democratic candidates withdrew from the race to throw their full weight behind the Governor.

Bullock may be a long-standing favorite among the party’s top-dogs, but his late entry to the race for Senate didn’t win him any favors in certain quarters. As CNN reports, fellow Big Sky Country Democrat, Bozeman scientist Mike Knoles, was so peeved when the rumors of Bullock’s entry started circulating, he tweeted “If you enter this race now, you’re a fraud, a liar, and I’m honestly not sure I can support you.”

If there are a few things that can help sway an undecided voter, it’s the candidate’s stance on the ever-topical issues of abortion, the environment, gun control, and the death penalty. Tacking the first topic, Bullock, who’s been described by The Washington Post and ABC News as a ‘moderate Democrat’, is committed to pro-choice. During his time as Governor, Bullock has vetoed efforts at restricting abortion rights on several occasions. His efforts haven’t gone unrecognized: in 2013, he won a 100 percent rating from NARAL Pro-Choice America, and in 2016, he re-election bid was backed by Planned Parenthood Advocates of Montana.

9. A Shift on Gun Control

Over the years, Bullock’s attitude to the gun control question has shifted. As noted by The New York Times, the Senate hopeful and once-proud gun owner was firmly against gun control and universal background checks until 2016, but has since come to support magazine size limits and extreme risk protection laws, along with a ban on certain semiautomatic weapons.

Although Bullock is all for the environment in theory and has confirmed he thinks human-driven climate change is both a real thing and a bad thing, he’s inspired the wrath of environmentalists on numerous occasions. As well as leading his state to become the first to halt arrangements for the Clean Power Plan in 2016, he was the only 2020 Democratic presidential candidate who refused to sign the No Fossil Fuel Money pledge.